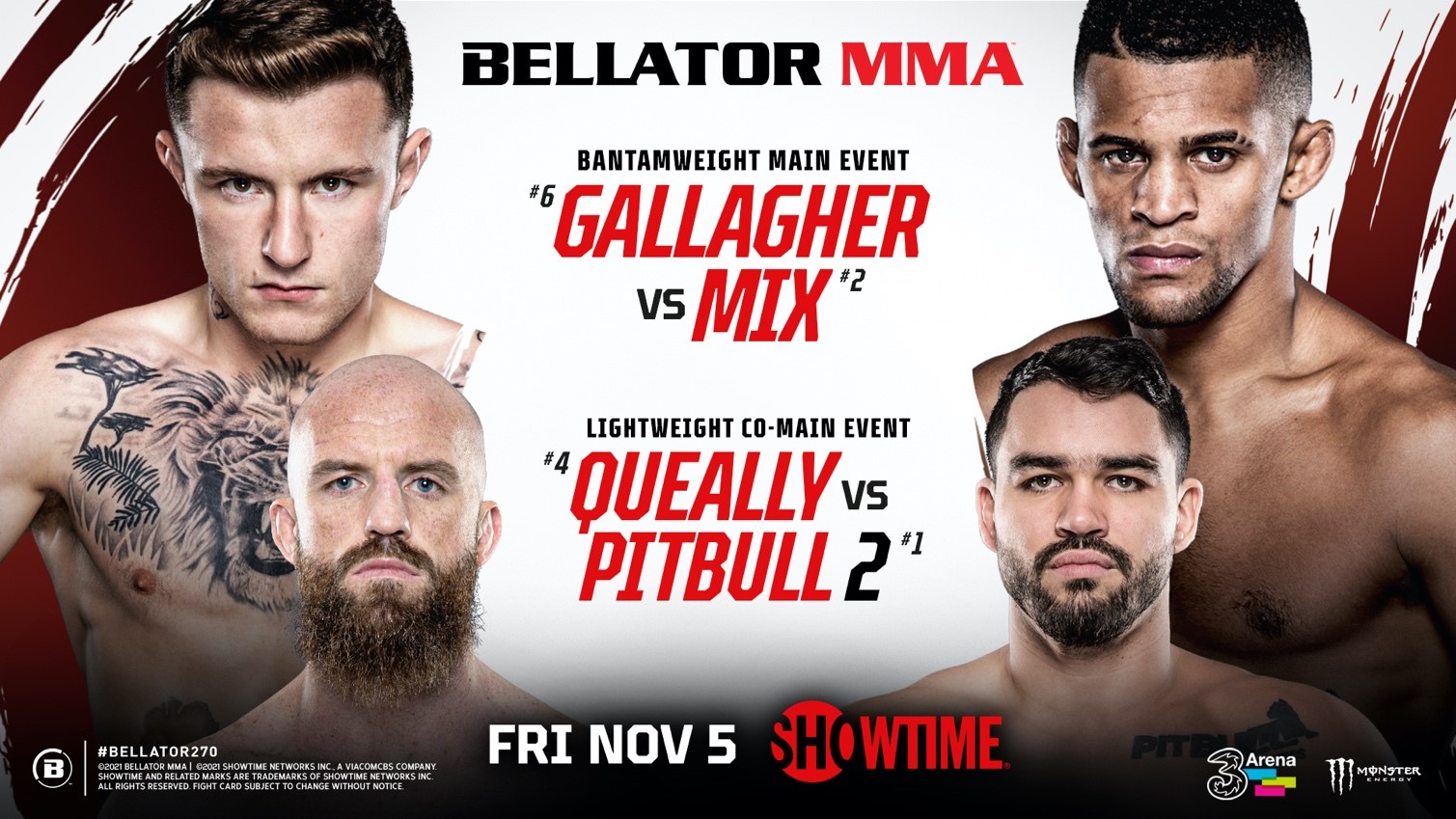 Set to light up the main card on BELLATOR’s highly-anticipated return to Ireland is a middleweight matchup between hometown hero and No. 6 ranked ‘Relentless’ Charlie Ward (9-4) and No. 9 ranked Norbert ‘Magic’ Novenyi Jr. (5-0). In addition, a thrilling featherweight fight will be contested between No. 6 ranked Daniel ‘Drake’ Weichel (41-12) and No. 7 ranked Pedro ‘The Game’ Carvalho (11-5).

In the United States, the main card action will air live on SHOWTIME at 5 p.m. ET/2 p.m. PT. BELLATOR fans in Ireland can watch the eagerly anticipated event on both Virgin Media Two and Virgin Media Sport, while UK fight fans can watch event live on BBC iPlayer.

The news comes just a week after the promotion announced their explosive return to the Irish capital. BELLATOR 270: Gallagher vs Mix will be headlined by No. 6 ranked James “The Strabanimal” Gallagher (11-1) and the No. 2 ranked Patchy Mix (14-1) in what is set to be a must-see bantamweight match up. In the co-main event, Waterford’s Peter “The Showstopper” Queally (13-5-1) will look to bring the house down as the No. 4 ranked lightweight goes head-to-head against 23-time BELLATOR veteran and No. 1 ranked Patricky “Pitbull” Freire (23-10) in a hotly anticipated immediate rematch.

Tickets for BELLATOR 270: Gallagher vs Mix are on sale now and can be purchased online from Ticketmaster.ie and Bellator.com.

“Relentless” Charlie Ward, who trains out of SBG, is unbeaten in his last two fights with six of his nine professional victories coming by the way of knockout. The number six ranked middleweight fighter will be looking to build on his impressive decision victory over Andy Manzolo in Milan at BELLATOR 247 last October. Ward will want to put on a show for his home fans and with fireworks guaranteed inside the 3Arena, this fight is certainly one not to be missed.

Standing in his way will be Hungarian Norbert Novenyi Jr., who trains out of London Shootfighters alongside Michael “Venom” Page. Novenyi who is yet to taste defeat as a professional, is one of the most explosive fighters in the middleweight division. Hewill want to prove his class once again after his first-round submission victory in his last fight against Laïd Zerhouni, which also took placeat BELLATOR 247. Novenyi will be hoping to silence the home crowd and continue his rise through the middleweight rankings as he looks to build on his impressive start to his MMA career.

Meanwhile, the highly experienced No. 6 ranked German, Daniel Weichel heads to Dublin after claiming victory over Keoni Diggsat BELLATOR 261 this past June. Weichel will be hoping to add to his impressive 41 professional victories in what is set be a thrilling encounter between two featherweights’ neck and neck in the BELLATOR rankings.

Opposing Weichel will be Portugal’s 26-year-old Pedro Carvalho, who also trains out of SBG in Ireland. “The Game” will be hoping to return to his winning ways and climb back up the featherweight rankings. A talented submission specialist, Carvalho has scored six of his 11 career victories in that fashion, proving to always be a tough out. On Nov. 5, the former featherweight world title challenger will be looking to secure the victory in his adopted hometown.

Fight fans can see the updated card for BELLATOR 270: Gallagher vs. Mix below: