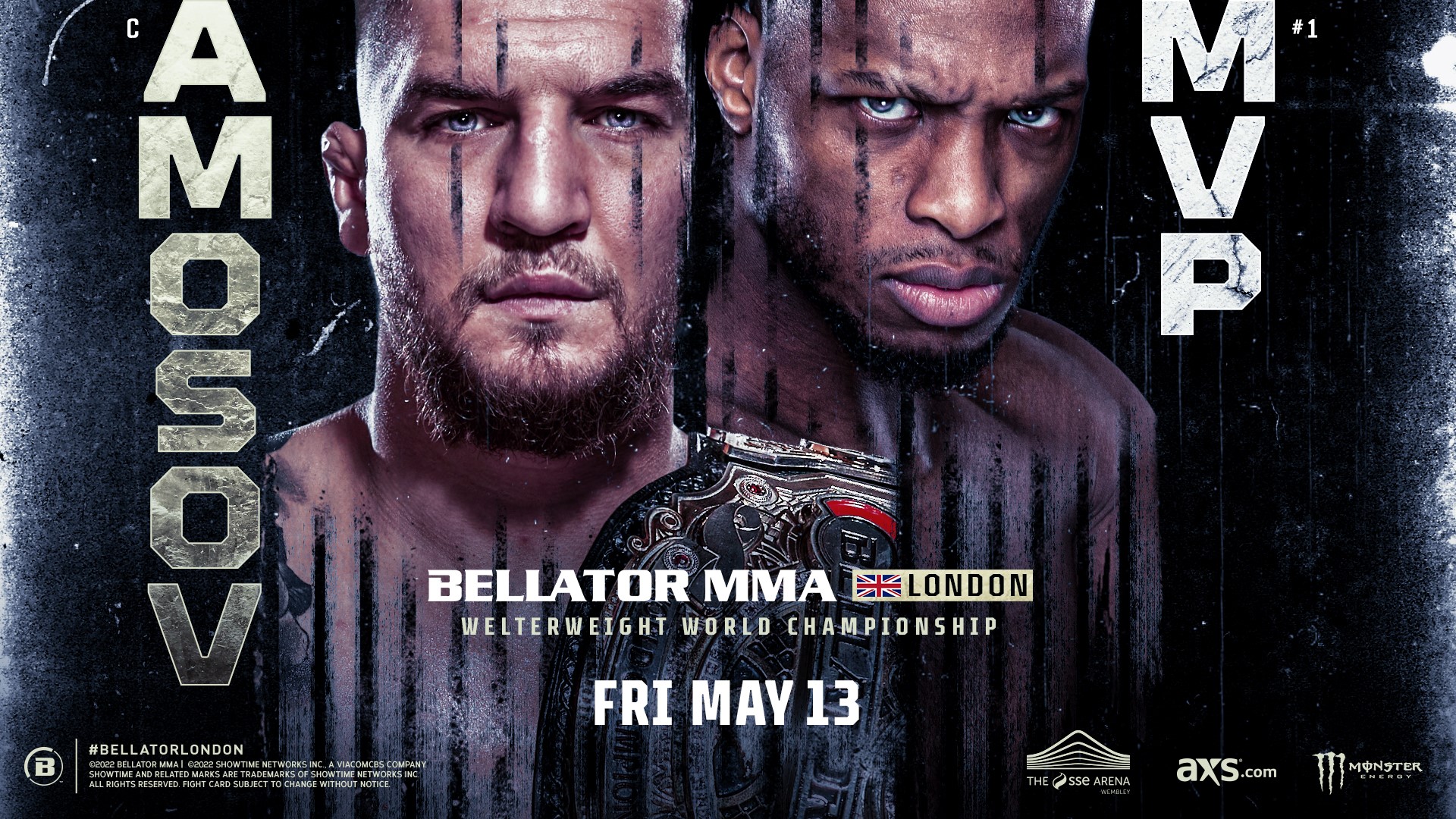 LOS ANGELES – After scoring multiple takedowns in his last bout to dethrone then-champion Douglas Lima and become the BELLATOR Welterweight World Champion in the main event of BELLATOR MMA 260, undefeated Ukrainian Yaroslav Amosov (26-0) will put his belt on the line against No. 1-ranked welterweight and London native Michael “Venom” Page (20-1) on Friday, May 13, when the promotion returns to The SSE Arena, Wembley.

One of the top fighters in the world, Amosov currently holds the longest active unbeaten streak in all of MMA, having yet to taste defeat through is first 26 professional fights. With only three wins to go before eclipsing retired MMA star Khabib Nurmagomedov’s record of 29 straight wins, Page will look to spoil Amosov’s entry into the history books and capture BELLATOR gold in the process, becoming the first British welterweight to do so.

Tickets for BELLATOR LONDON: Amosov vs. MVP will go on sale Friday, Jan. 21, at both axs.com/uk and BELLATOR.com, with a special presale taking place starting Wednesday, Jan. 19.

Honing his skills with American Top Team in Florida, the undefeated “Dynamo” smothered three-time welterweight champion Douglas Lima on June 11, 2021, en route to capturing the 170-pound title with a five-round unanimous decision. Amosov pitched a shutout on one scorecard, while dropping only round on the other two. The judges scored the contest 50-45 and 49-46 twice.

Set to headline a BELLATOR MMA card for the third time in eight fights since joining the promotion in July 2018, the Ukrainian powerhouse has compiled a perfect 7-0 promotional record with triumphs over such top-tier talent as Ed Ruth, Logan Storley, and Lima.

Prior to commencing his professional MMA career at age 18 in 2012 and becoming the first Ukrainian-born champion in BELLATOR MMA history, Amosov secured the World Combat Sambo Federation crown four times (2013-15, and 2017), as well as the European Combat Sambo Federation title twice (2013-14). A four-time world sambo kingpin, the Kiev native also earned a European Cup crown to go along with his two European and Eurasia championships during a stellar amateur career.

Scheduled to fight for the second consecutive time in front of his hometown fans, MVP avenged a previous loss by earning a hard-fought, split decision in his last outing over Lima at BELLATOR MMA 267 on Oct. 1, 2021. Two of the judges saw it 29-28 for MVP, while the third scored the close battle 29-28 for Lima.

Hailing from a highly successful kickboxing family, the multi-faceted MVP started his mixed arts career when he began training at the tender age of five. Nicknamed “Venom” in homage to a 1978 cult martial arts film entitled “Five Deadly Venoms,” the United Kingdom standout turns 35 one month prior to challenging Amosov. In addition to his cage success, Page has secured 10 freestyle kickboxing world titles and knocked out both of his pro boxing opponents since making his 2016 squared circle debut.

After opening his BELLATOR MMA career with a 10-second destruction of Ryan Sanders at BELLATOR MMA 93 in March 2013, MVP has recorded the most knockouts in the history of the Scott Coker-led promotion. Three years after his promotional debut, the once-beaten Londoner captured one of the most devastating knockouts in BELLATOR MMA history when he landed a flying knee at 4:31 of the second round to stop Brazilian Evangelista “Cyborg” Santos at BELLATOR MMA 158 in London. Currently riding a six-bout winning streak, the hard-hitting Page opened his pro career by scoring nine first-round finishes in his initial 13 contests.