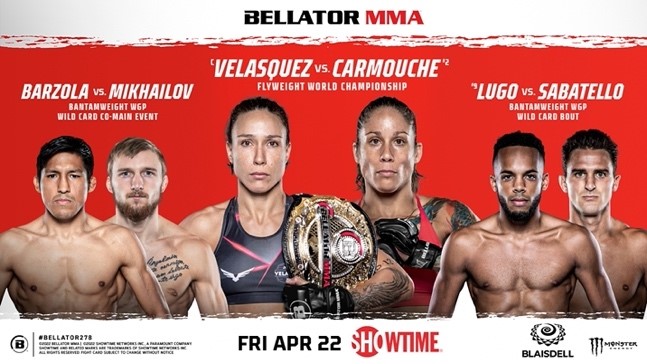 HONOLULU, HI (Wednesday, April 20, 2022) – In preparation for a weekend full of fight action, BELLATOR MMA 278: Velasquez vs. Carmouche main card fightersand select BELLATOR MMA 279: Cyborg vs. Blencowe 2 / Archuleta vs. Stots combatants spoke to the media today before putting their talents to the test inside the cage on Friday, April 22 and Saturday April 23 at the Neal S. Blaisdell Arena.

Warming up the cage ahead of the BELLATOR 279 card on Saturday, BELLATOR’S Friday show will be headlined by a Women’s Flyweight World Championship matchup between undefeated Juliana Velasquez (12-0) and women’s MMA pioneer and No. 2-ranked flyweight Liz Carmouche (16-7). Two fire-cracking wild card bouts will also take place as part of the Bantamweight World Grand Prix between Enrique Barzola (17-5-2) who will be facing Nikita Mikhailov (9-1) and No.9-ranked Jornel Lugo (8-0) challenging Danny Sabatello (11-1). The winner of Barzola vs. Mikhailov will move on to face Magomed Magomedov (18-2) and the winner of Lugo vs. Sabatello will fight Leandro Higo (21-5). In a light heavyweight contest, Christian Edwards (5-1) will fight No. 9-ranked Grant Neal (6-1). Opening the televised card in a 160-pound contract weight bout, Manny Muro (12-7) will measure his skills up against Nate Andrews (16-4).

Part one of the duo of events BELLATOR will be hosting over the weekend, BELLATOR 278 is a special event for current military, veterans, and first responders. Admission can be redeemed at the box office beginning at 2 p.m. HST and is free for any individual with valid proof of military or work identification, plus a guest.

Here is what the BELLATOR 278 fighters had to say:

“Carmouche is a very experienced fighter but today I am the world champion, not her. I look at the poster and I’m super stoked to be here. But I think I should be in the women’s pound-for-pound discussion. I have one fight coming up and my name is for sure going to be on the list after this matchup.

“Carmouche is definitely my most experienced opponent, but I don’t think she’s my hardest task. A fight is a fight so let’s see what happens. I think Lara from Colombia and Ilima-Lei Macfarlane were my toughest opponents.

“I just want to solidify my belt at flyweight but it’s definitely in my plans to go up and become the first woman to hold two titles simultaneously.”

“I think in part it’s a front that she’s saying I’m not her toughest test. If I am being overlooked, great. I love being underrated. It just makes it that much sweeter for me.

“I saw zero evolution in Velasquez from the Macfarlane fight to the Denise Kielholtz fight. She looked like the same fighter in every fight that I’ve seen so far.”

“My plan is to put Mikhailov under pressure. I have great cardio. I think this guy is comfortable to go to the ground. But my pressure and my mental is different now. I’m going to destroy this guy.”

“I’m very happy to be participating in the Grand Prix. I didn’t want to lose this opportunity. I’m going to do everything I can to win this.

“I don’t really know what Barzola is going to bring in this fight. All I know is that we have our own plan, and we are going to stick to it. I’m 23 years old. As a sportsman, I’ve matured. I’m ready for the top guys in the division.”

“I wasn’t even supposed to be in the tournament, obviously. For me to get in, two people had to fall out. Not one, but two. That happened. The fact that I’m even ranked, I’m 8-0. I’m not supposed to even be ranked. I just so happen to have more fights in BELLATOR than most of these other guys like Brett Johns, Danny Sabatello, Enrique Barzola. These guys are veterans and they’re not ranked. But because I’ve been here for so long and have five fights, I was ranked.

“On paper, I think Sabatello is my toughest test to date. But I think people are judging him too much on paper. If you watch him fight and you break down his skillset, I don’t think he’s my toughest fight.

That’s really the goal. My goal this fight against Jornel Lugo isn’t just to beat him. I won’t be satisfied just beating him. I need to f*ing torture him.