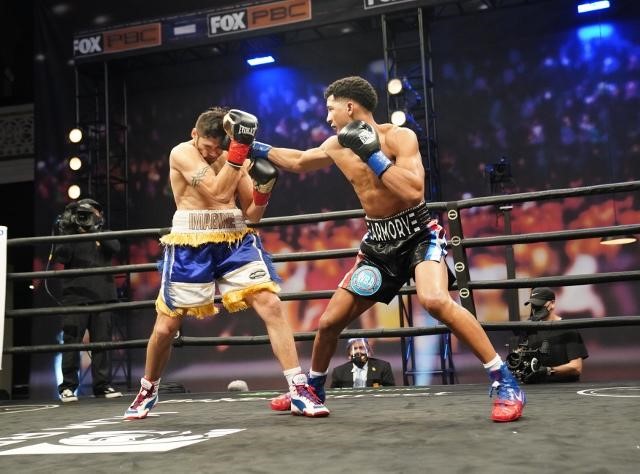 Fort Lauderdale, FL (December 29, 2020) -WBA Interim Super Middleweight champion David O. Morrell Jr. beat up Mike Gavronski on his way to a 3rd round stoppage in a scheduled 10-round bout at The Shrine Auditorium and Expo Hall in Los Angeles.

The fight was the main event of card that was seen live on FOX.

Morrell is promoted by Warriors Boxing Promotions and Ural Promotions.

“The first time I saw a video of David Morrell fighting, he was 17 years old
and competing against the 2 time gold medal winner De La Cruz. Having worked
with 23 worlds champions including Roberto Duran, I knew David was going to
be a great one. He continues to show why he is already capable of competing
with the very best in the world.” Quote from Warriors COO Luis DeCubas, Sr.

Even though the fight took place at 170 lbs., Morrell Jr. will remain the WBA Interim Super Middleweight World champion.

Morrell, who only accepted the fight on December 4th, did not want to pass up an opportunity to headline on a major network. Morell – Gavronski was scheduled as the main event. Morrell and his team had informed event organizers that there was a possibility that the fight would need to take place above the 168-pound limit, as he was not in training camp, and had only three weeks to prepare. A new agreement for an 170-pound bout was consented to by all sides.

Morrell will continue to campaign in the hotly contested super middleweight division, he will look to fight any of the top contenders.