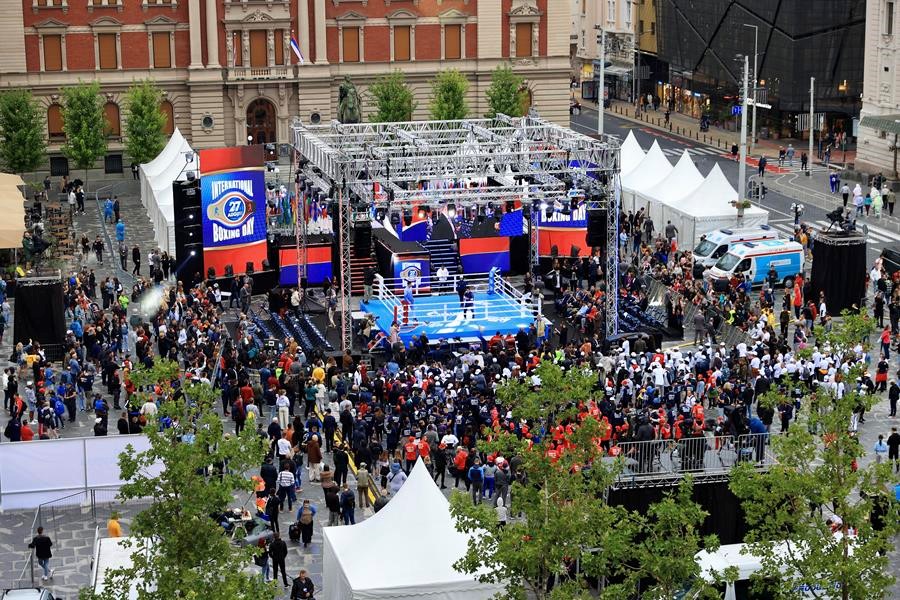 27 August, Belgrade: The world boxing family came together today on International Boxing Day to celebrate their shared love of the sport with more than 50 National Federations hosting boxing activations and mass participation events.

The International Boxing Association (AIBA) led the celebrations from Belgrade, Serbia – the host of this year’s Men’s World Championships – with an open-air masterclass run by legendary boxer Roy Jones Jr, exhibition bouts and a boxing show, all held under the theme #BoxingUnites in Belgrade’s Republic Square.

Attendees at the events in Belgrade included AIBA ambassadors Roberto Cammarelle, Zeina Nassar and Said Taghmaoui, as well as current boxing stars such as Oleksandr Khyzhniak from Ukraine, Bakhodir Jalolov from Uzbekistan, Albert Batyrgaziev from Russia and Stoyka Zhelyazkova Krasteva from Bulgaria.

Speaking following his masterclass for members of the public Roy Jones Jr said:

“The atmosphere here is beyond anything I expected. People are so engaged with the sport of boxing and so happy to be here. You can feel a sense of community radiating from these athletes and kids and see how it is uniting people from very different backgrounds and cultures. This is what International Boxing Day is all about!”

A number of high-class exhibition bouts with impressive performances from athletes such as Wanderson de Oliviera from Brazil took place shortly after. Boxers faced off in a friendly manner, yet still delivering an unforgettable display of grace and skill.

AIBA President Kremlev who was in Belgrade for the celebrations added:

“The boxing community coming together is beautiful to see. There is unity in boxing. We hope events such as this continue to showcase that, as well as demonstrate what boxing is all about. Everyone here loves our sport and we want nothing more than to see more people get involved.”

Meanwhile, over 50 National Federations joined AIBA in celebrating International Boxing Day. Many of them hosted open-air or online training sessions and masterclasses of their own, which were broadcast live on linear channels or digital platforms. Some Federations organised community-based events, such as Czech Republic, who dedicated the day to children by organising a whole day out centred around boxing, for families to enjoy. Nepal’s National Federation hosted a mass blood donation event, along with a street-cleaning effort.

“Today is about celebrating boxing but it is also an opportunity to show that it is an accessible sport – open to everyone. Boxing has had such a positive impact on my life and I want as many other people to benefit from it as well. At AIBA we are working hard to develop boxing all around the world so more people have the opportunity to take part in our sport.”

Earlier in the day, AIBA President Kremlev, hosted a media round table, where he was joined by the organisation’s Secretary General Kovács, as well as Roy Jones Jr. Together they shared updates on AIBA’s reform progress, which is helping re-unite the boxing family by increasing trust in the organisation, as well as plans for Men’s World Championships and other events in the near future.