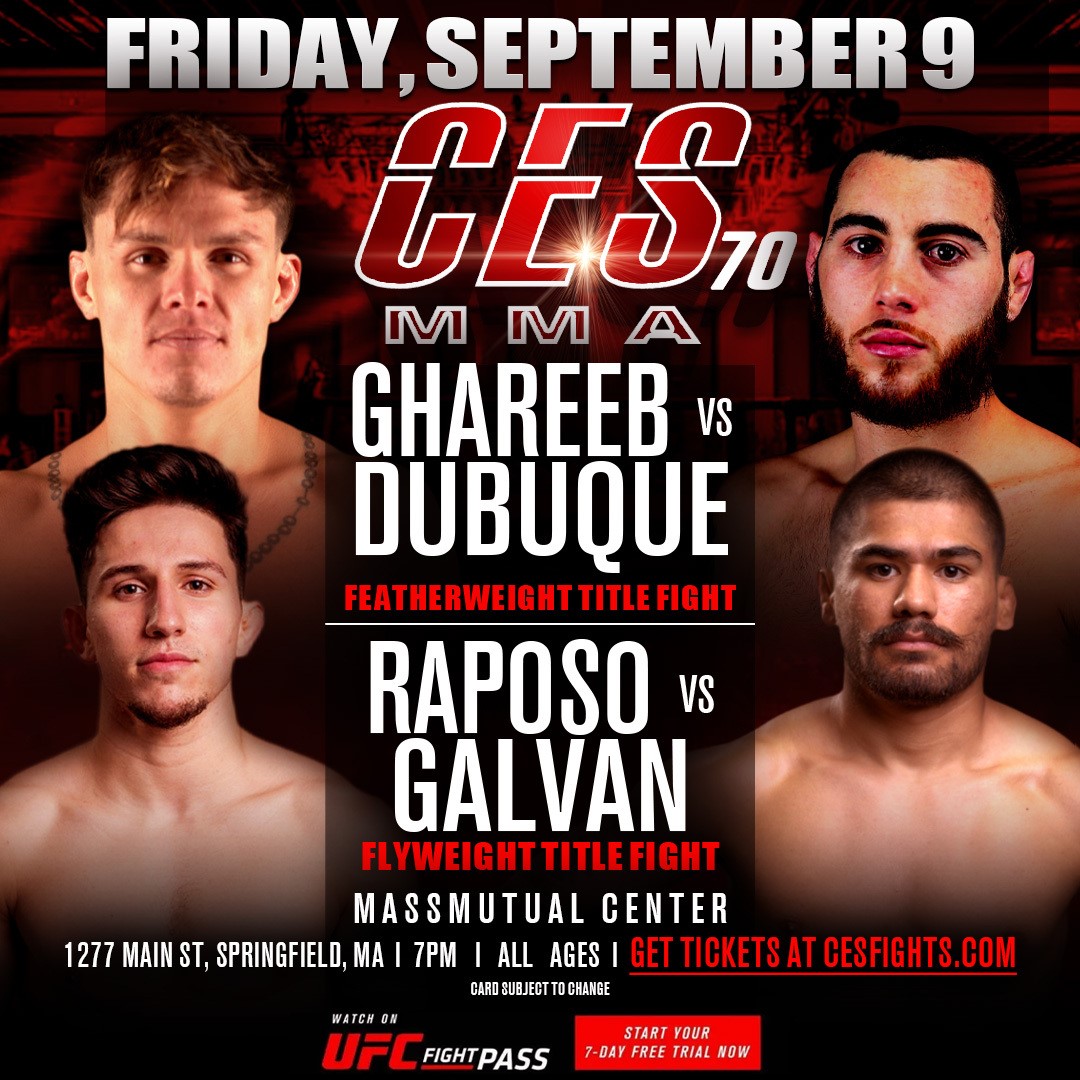 As two of the top featherweights in the region, the red-hot Ghareeb (6-1) from Southampton, MA, and the Waterbury, CT, native Dubuque (8-5) promise to brings fireworks September 9 as they each attempt to bring home their first world title in CES’ first event in Massachusetts in more than a year.

Ghareeb has won four consecutive fights – all with CES – including three first-round finishes, the most recent coming at CES 69 in June when he set a new personal best with a 30-second knockout win over Javon Wright. The September 9 fight against Dubuque is Ghareeb’s first championship bout.

“Since 2013, I’ve had my mind set on being in the UFC and now Dan Dubuque in my path to the top,” said Ghareeb. “We share a lot of mutual friends and training partners and have even had the chance to share the mats together. He’s a vet, he’s tough, and has a lot of experience, but I believe I’m part of the next generation of fighters to burst onto the scene.

“I don’t just want to beat him – I want to finish him. A win over Dan should put me right where I want to be. Sorry, Dan, but like they say, ‘Out with the old, and in the with new.’”

For Dubuque, September 9 is his first fight since January of 2020, shortly before the start of the pandemic, but his second title bout with CES. In 2019, Dubuque challenged then champion Bruce Boyington for the featherweight title in Hartford, losing a controversial split decision.

I lost a split decision in my last title fight for CES – a fight I thought I won,” Dubuque said. “I like Nate. He’s super talented, but I’m one of the toughest guys in New England and I’m coming to take that belt this time.”

Raposo (6-1) returns to CES following a brief stint with the UFC’s The Ultimate Fighter and Dana White’s Contender series. He won his first and only bout with CES via unanimous decision over Matt Almy at CES 61. Galvan (5-2) made his first and only appearance for CES in 2021 at CES 64, beating David Michael Durao by unanimous decision to start a four-fight win streak, which he carries into next month’s showdown with Raposo.

In its brief history, CES’ 125-pound title has only had one owner, Pennsylvania’s Blaine Shutt, who won the inaugural crown in January of 2020 at CES 60, only to have his first scheduled defense at CES 61 canceled due to the COVID pandemic. Shutt went on to sign with Bellator in 2021, effectively vacating the title.

A two-time CES vet and Springfield, MA, native, Casey (9-5) returns to the promotion with three wins in his last four bouts. After two highly-publicized bouts against Sean O’Malley and Guido Cannetti with UFC, Moutinho (8-6) fights for the 13th time under CES, boasting an 8-4 record with the promotion. Collins (3-0) is back for the second time since June after ending an 11-year layoff with a victory at CES 69.

Panferov (3-0), “The Russian Polar Bear” fighting out of New Haven, CT, aims for his fourth win in as many appearances with CES while Barros, a two-time Bellator vet from Cape Verde now training out of Fall River, makes his promotional debut.