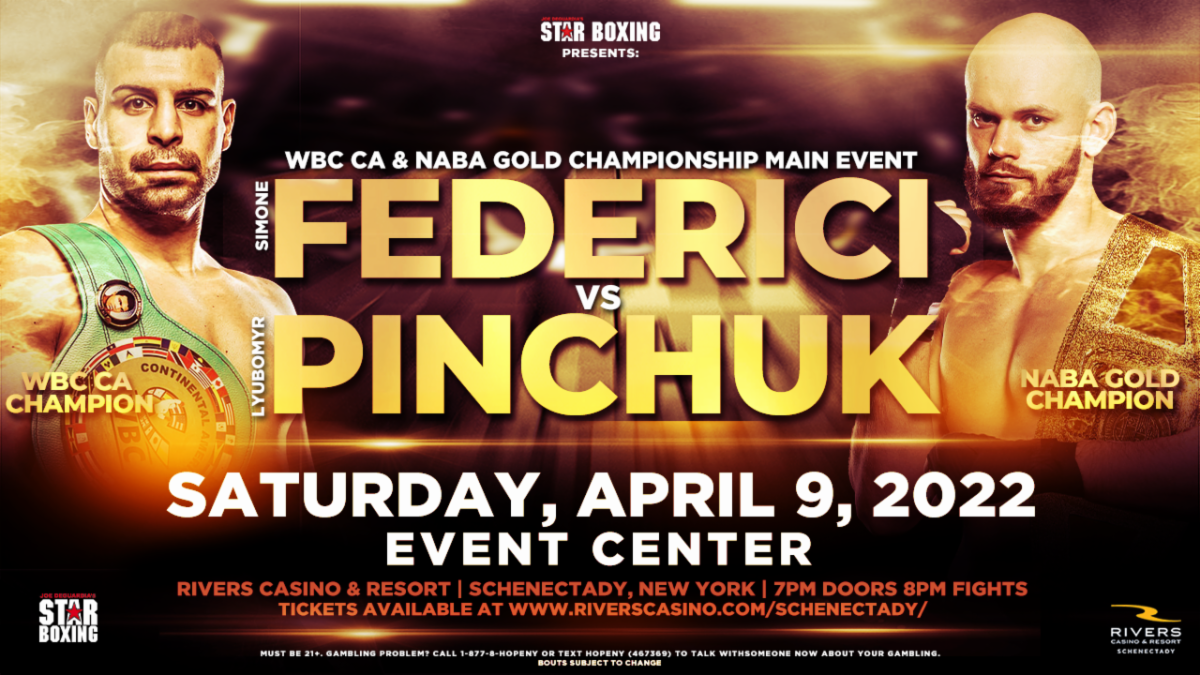 Schenectady, NY (March 30, 2022) – On Saturday, April 9, Italy based WBC CA Champion SIMONE “TYSON” FEDERICI (Lazio, Italy 18-2-1 8KO’s)will put his title on the line against Pittsburgh based and NABA Gold Champion LYUBOMYR “THE DEMOLITION MAN” PINCHUK (Pittsburgh, PA by way of Ukraine, 14-8-2 8KO’s) who will also put his title on the line in a winner take all cruiserweight title collision.

In November of 2019, Federici made the trip to New York to fight Stivens Bujaj for the WBC Continental America’s Cruiserweight title at Star Boxing’s “Rockin’ Fights.” Federici pressed the action, coming forward for nearly the entire fight. At the close of the 10-round contest, Federici would defeat Bujaj by unanimous decision and return home to Italy with the belt. (98-92, 97-93 x2). Federici now returns to New York after two stay busy victories in Italy, looking to defend his belt, and climb the cruiserweight rankings.

Pinchuk earned his NABA Gold title by defeating Mario Flores by unanimous decision on the undercard of his Star Boxing stablemate JOE SMITH JR.‘s (28-3 22KO’s) recent WBO World Light Heavyweight Title defense at Turning Stone this past January. Pinchuk put his punches together and used a sticking jab as well as his height advantage to keep Flores at bay, and return to Pittsburgh with the title.

Star Boxing CEO JOE DEGUARDIA had this to say about the main event, “This main event has both international allure and important world ratings at stake. Both Federici and Pinchuk have a lot on the line and their styles should matchup to create a thrilling main event on April 9.” When Federici and Pinchuk clash on April 9 at Rivers Casino, not only will two cruiserweight belts be on the line but a significant world ranking will be at stake. Professional championship boxing takes center stage at Rivers Casino in what should be an electric main event and exciting fight card.