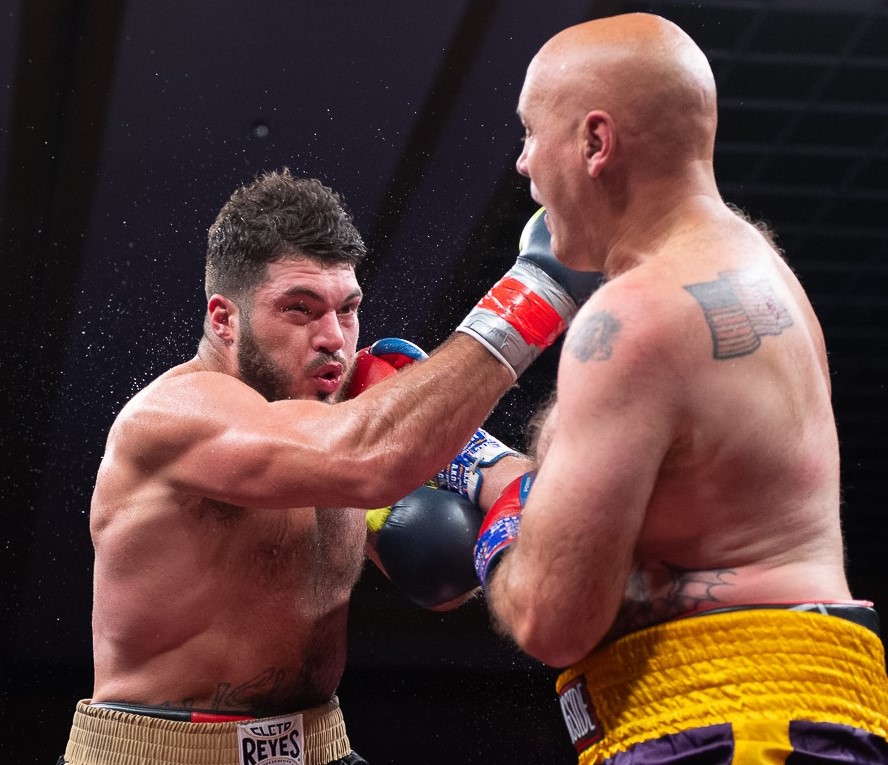 Cleveland, Ohio (August 26, 2021) – Every fighter talks and dreams about that “opportunity of a lifetime,” but few ever get it, and the percentage that actually come out on top is even smaller.

Heavyweight Juiseppe Cusumano, the hard-hitting, 6-foot-4 giant from Sicily – appropriately nicknamed “The Sicilian Nightmare” – finally gets that coveted, life-changing opportunity Sunday, August 29 in Cleveland when he faces 23-year-old United Kingdom prospect Daniel Dubois in a 10-round bout on the undercard of the highly-anticipated Jake Paul-Tyron Woodley pay-per-view extravaganza on Showtime.

Since signing with longtime promoter and CES Boxing president and CEO Jimmy Burchfield four years ago, Cusumano’s stock has risen considerably to the point where he is name one of the more talked-about heavyweights in a crowded market of heavy-handed sluggers. He is 9-2 under CES’ guidance, including his most recent win in November against Gregory Corbin on the undercard of the Mike Tyson-Roy Jones exhibition showdown in California.

The difference this time is there will be fans in attendance, which means more eyes on Cusumano and an even bigger opportunity to show the world what he can do on the sport’s biggest stage. Nerves? Fuggedaboutit! This is the fight – and the platform – Cusumano envisioned when he teamed with Burchfield in 2017, and with Paul, a social media influencer with more than 20 million followers on YouTube and an additional 16 million on Instagram, facing Woodley, a former UFC champion making his pro boxing debut, there’s no telling who might be watching Sunday.

The PPV portion of the show begins at 8 pm ET and is available for $59.99 on Showtime PPV on all traditional cable and satellite providers. The live stream is also available on Showtime.com or by downloading the Showtime app.

“I’m ready,” Cusumano said. “I’ve been fighting for a long time, and I’m ready to let my skills show.”

With Cusumano (19-3, 16 KOs) and Dubois (16-1, 15 KOs) having combined for 32 knockouts in their pro careers, the odds suggest someone will hit the deck Sunday before 10 rounds are through, but Cusumano is promising a smarter, more mature approach.

Over a span of four years, Cusumano knocked out 11 of 12 opponents, which, despite a rewarding payoff at the final bell, may have worked against him in others bouts as his game plan at times appeared too focused on landing a finishing blow. Eschewing the knockout in favor of a more patient, deliberate style of boxing is difficult for a fighter who admits he fell in love with the sport because he liked to “mix it up” as a youth – especially one who grew up idolizing Tyson – but Cusumano now understands at the age of 33, a smarter approach may not only pay greater dividends, it may also keep him around longer than expected.

“I’m a lot better than what I’ve shown,” Cusumano said. “I’ve really been working on my skills and how to show off what I can do. This is the perfect fight to do that.”

Dubois, who began boxing at the age of 9 while growing up in London, is, according to Cusumano, “young and hungry” and no doubt a dangerous adversary, but Cusumano is confident he’s yet to face anyone with as much punching power as he has – a bold statement considering Dubois, the former WBA interim heavyweight champion, has faced the likes of Joe Joyce, who stopped Dubois in the 10th round of their scheduled 12-round fight in November of 2020, Dubois’ only loss as a pro.

The overwhelming confidence Cusumano has displayed in recent years is a byproduct of his own success coupled with the belief that anything is possible, even when dark days make it seem like there’s no light at the end of the tunnel. Cusumano has faced as many battles outside of the ring as he has in between the ropes, including contract disputes with ill-minded promoters, depression, and alcoholism, but he’s picked himself up off the canvas each time, the mark of a true champion.

The only logical next step is to cement his status as a champion inside the ring, and he can begin taking those steps by putting everything he’s learned in the gym, the ring, and in life to use against Dubois. The journey hasn’t been easy, but that light at the end of the tunnel is starting to shine. Cusumano is in the best shape of his life, back in the 220-pound range after feeling “sluggish” in the 240s, and has all the right people in his corner as he prepares for the fight of his life this weekend.

“Everything is looking good. Everything feels rights,” Cusumano said. “Dubois is an attacker like I am, and he’s young and hungry. This is a good fight. Both of us hit hard and fight to slug it out, but I believe the smarter man will win.

“As I’ve gotten older, I’ve realized you can’t always just attack. This is the heavyweight division. Anything can happen. The older I’ve gotten, the smarter I’ve gotten. This is a dream come true.”