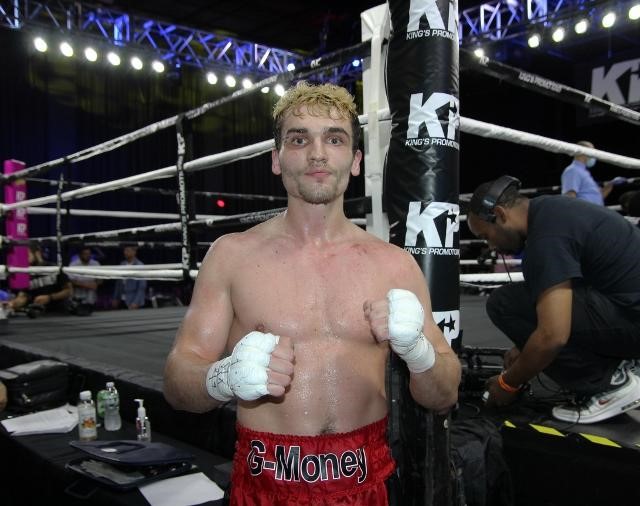 PHILADELPHIA–Super Middleweight’s Devar Ferhadi and Genc Pllana shined in their respective main events as part of a day-night doubleheader at the 2300 Arena in Philadelphia.

The shows, which were promoted by King’s Promotions, played to capacity crowds and provided tremendous action for those in attendance and watching around the world on BXNGTV.com

In the evening main event, Genc Pllana stopped hometown favorite Brandon Robinson in the eighth and final round of their super middleweight clash that headlined the evening session of a King’s Promotions day-night doubleheader at the 2300 Arena.

It was a spirited bout throughout the contest that saw Pllana forge ahead on the strength of a jab that he followed up by flurries of scoring blows that weren’t impactful, but more of controlling shots. Robinson created some offense of his own against the awkward Pllana. In the later rounds, it seemed that Pllana was wearing Robinson, and in round eight he cracked Robinson with a hard right hand in the corner that put Robinson down, and the fight was stopped at 33 seconds.

Pllana of Hagerstown, MD is 9-3-1 with five knockouts. Robinson of Philadelphia is 15-3.

In a battle of undefeated lightweights, James Bernadin took a six-round unanimous decision over Osvaldo Morales.

In round four, Muhammad dropped Johnson with a hard right hand in the corner. Johnson was hurt, yet tried to fight back, but caught again and was driven into the ropes where he ate several more flush shots and the fight was stopped at 2:40

Muhammad of Richmond, VA is 5-0 with three knockouts. Johnson of Philadelphia is 7-4.

Khainell Wheeler stopped Vincent Baccus in round one of their scheduled six-round super middleweight clash.

In round one. Wheeler dropped Baccus with an uppercut. Seconds later it was a counter right that hurt Baccus and backed him into the ropes that was followed up by a right that sent Baccus down and the fight was stopped at 2:46.

Roudly Lolo stopped debuting Eric Monroe in the opening round of their scheduled four-round middleweight fight.

They came out and set a furious pace as they landed some hard shots until one blasted off of the head of Monroe that sent the first-time to the canvas. Lolo landed a flurry of punches that sent Monroe plummeting down, and the fight was stopped at 1:43.

Lolo of Harrisburg, PA is 1-0-1 with one knockout. Monroe of Philadelphia is 0-1.

Devar Ferhadi won an eight-round unanimous decision in a battle of super middleweights that headlined the King’s Promotions matinee portion of a day-night doubleheader at the 2300 Arena.

Andrew Rodgers scored an upset as he took a six-round unanimous decision over Greg Outlaw in a junior welterweight fight.

The fight was hotly contested throughout with Rodgers getting inside on the longer Outlaw. In round five,, the pressure of Rodgers forced a knockdown.

Joseph Jackson remained undefeated with an opening round stoppage over Terrance Williams in a junior middleweight bout.

Jackson landed a perfect left hook to the body that sent Williams down for the 10-count at 2:42.

Christian Bermudez remained undefeated with a 47 second stoppage over Lawrence Mertagh in a junior welterweight bout.

Bermudez of Brooklyn is 4-0 with three knockouts. Mertagh of Brooklyn was making his pro debut.

In round one, Hutchinson dropped Torres with a flurry of head shots. Hutchinson followed up with a some flush power shots, and the fight was stopped after a perfect left to the head that rocked Torres at 46 seconds.

Hutchinson of Reading, PA is 8-5 with two knockouts. Torres of Springfield, VA is 8-1-1.

Quadir Albright stopped Isaac Hayne in the opening round of a battle of pro debuting junior welterweights.

Albright landed a leaping right that sent Haynes down and the fight was stopped 65 seconds into the contest.

Albright of Philadelphia is 1-0 with one knockout. Haynes of Albany, NY is 0-1.