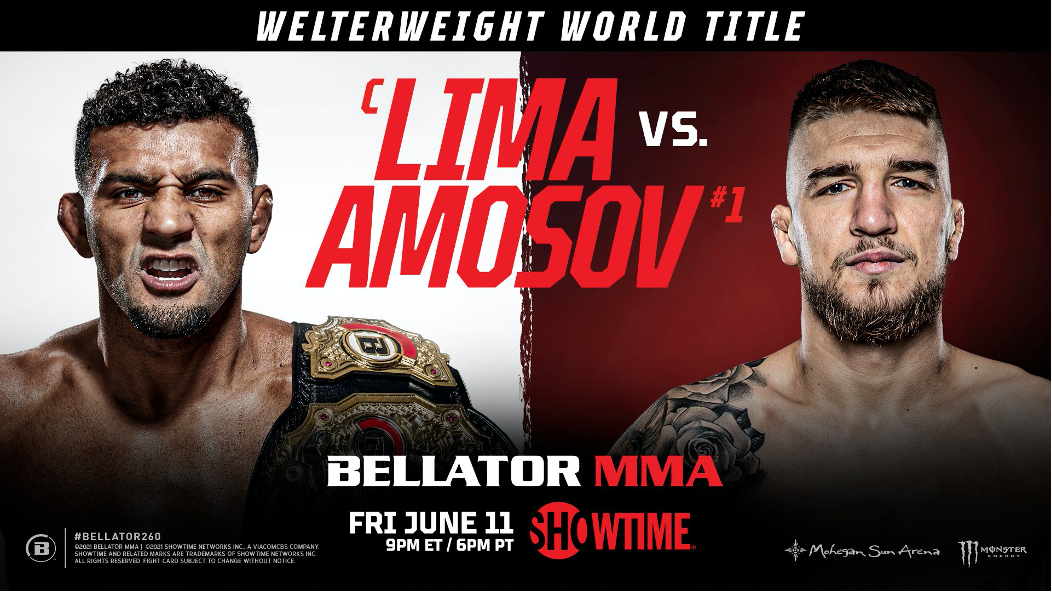 LOS ANGELES – BELLATOR MMA has confirmed the full fight card for BELLATOR MMA 260: Lima vs. Amosov on Friday, June 11 at Mohegan Sun Arena. The event is the promotion’s first show in America with fans in attendance since the start of the pandemic and airs LIVE on SHOWTIME at 9 p.m. ET/6 p.m. PT.

BELLATOR’s 170-pound kingpin Douglas Lima (32-8) returns to the welterweight division to put his title on the line against undefeated and No. 1 ranked Yaroslav Amosov (25-0) in a must-watch main event clash.

In addition to the headliner, the entirety of the BELLATOR 260 main card on SHOWTIME is stacked, including a 175-pound contract weight co-main event pitting legendary No. 6 ranked welterweight Paul Daley (43-17-2) against the streaking No. 3 ranked welterweight Jason Jackson (14-4). Also, a featherweight feature fight between the hard-hitting No. 6 ranked Aaron Pico (7-3) versus Birmingham’s Aiden Lee (9-4) and a welterweight showdown between Demarques Jackson (11-5) and Mark Lemminger (9-0, 1 NC). The newly announced fifth and final main card bout features a showdown between No. 10 ranked Vanessa Porto (5-3) and Pitbull Brothers-product Ilara Joanne (9-5) in a 128-pound contract weight bout.

The preliminary card is locked in with six action-packed fights, highlighted by a featherweight battle between No. 9 ranked Tywan Claxton (6-2) and the undefeated Justin Gonzales (11-0), who is making his BELLATOR debut. Meanwhile, hometown hero and fan-favorite Nick Newell (16-3) is set to square off against Bobby King (9-3) in a lightweight bout and 20-year-old phenom Lucas Brennan (4-0) prepares for a 150-pound contract weight clash with Matthew Skibicki (4-3). Also, two-time NCAA All-American wrestling standout Kyle Crutchmer (6-1) will take on undefeated welterweight Levan Chokheli (9-0, 1 NC) to cap off this stacked preliminary card.

As part of the launch of BELLATOR MMA on SHOWTIME, the network is offering viewers who are new to the SHOWTIME streaming service a 30-day free trial, followed by a discounted monthly subscription fee of $4.99/month for the next six months. Viewers can sign up at SHO.com/BellatorMMA. Subscribers will be delivered two premier BELLATOR MMA events per month throughout 2021 and beyond, with all events scheduled to air live at 9 p.m. ET/6 p.m. PT anywhere the SHOWTIME service is available.

Full bout listings are below: