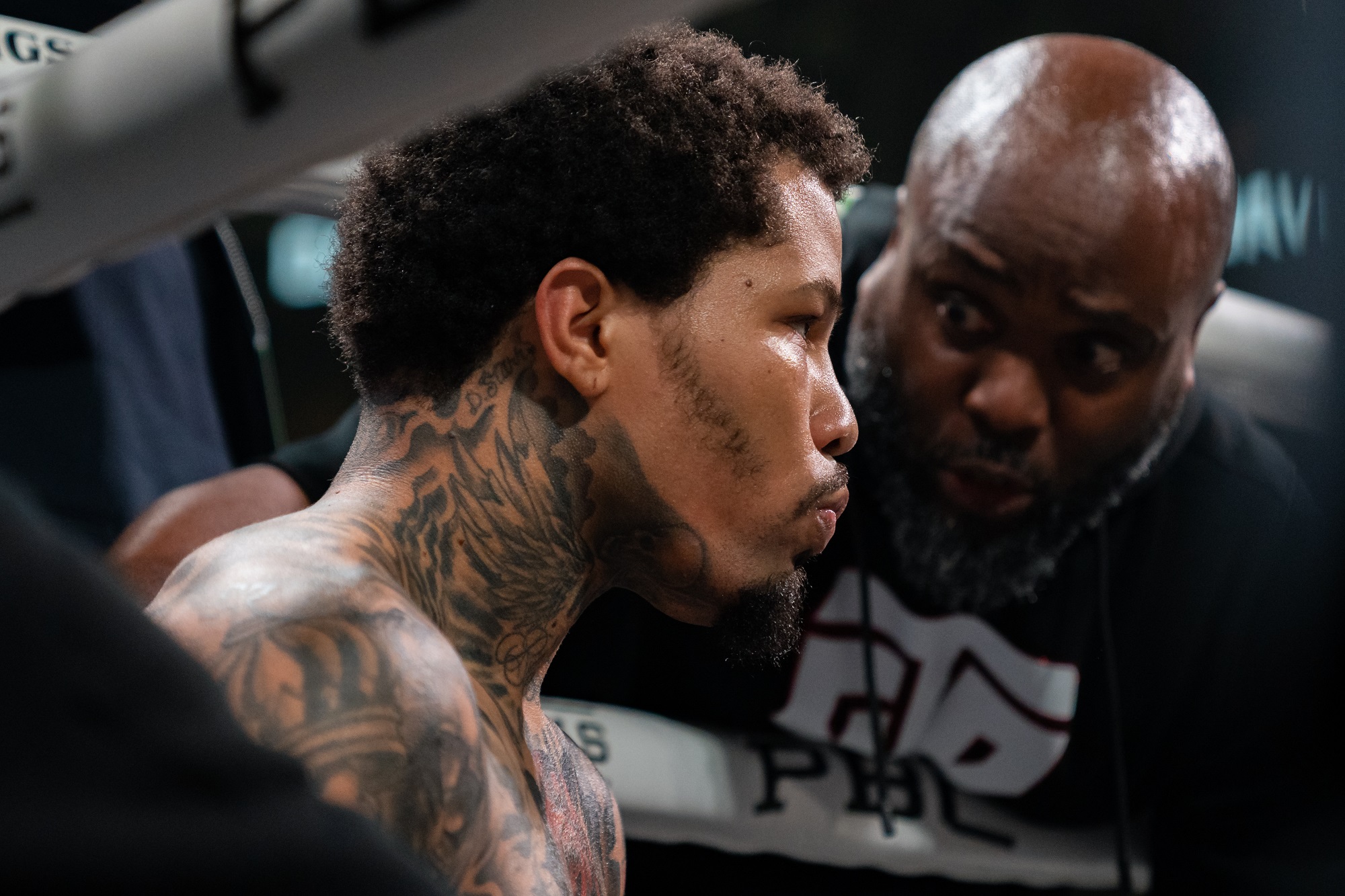 BROOKLYN – May 29, 2022 – Five-time world champion Gervonta “Tank” Davis, boxing’s hottest young attraction, added to his fast-growing highlight reel and retained his WBA Lightweight Title with a sensational knockout victory over previously unbeaten Rolando Romero Saturday night in the main event of a SHOWTIME PPV in front of a sold out Barclays Center in Brooklyn in a Premier Boxing Champions event.

For Davis, it was a return to the venue where he won his first world title via a star-making 2017 KO of Jose Pedraza. Saturday’s event was the highest grossing and most attended (18,970) boxing event in the venue’s history.

“We did it again in New York City baby,” said Davis. “Thank you New York City.  I won my first belt here and it was great to come back to Brooklyn and do it again.”

The fierce rivals finally settled their war of words in the ring in a highly-anticipated event, although the early rounds saw the fighters largely feeling each other out. Davis (27-0, 25 KOs), a three-division world champion, showed off his movement and boxing abilities through those rounds, while Romero (14-1, 12 KOs), who promised a first-round knockout, was unable to hurt Davis despite pushing the pace initially.

“He was strong for sure but there were a couple shots that I was getting warmed up with and he caught me and I was like, ‘I can’t sit with him just yet,’” said Davis. “I know when to take it to my opponents and when to chill out. There was someone in the crowd and they were telling me to press forward and I was like, not yet. I got to loosen him up a little more.”

In round six, Davis gave his legions of loyal fans what they had come out to see, landing the decisive blow as he had guaranteed in the pre-fight build-up. Davis closed the show with a fierce counter left hook that sent Romero face first into the ropes and onto the mat.

While Romero was able to rise to his feet, referee David Fields had seen enough and waived off the action 2:49 into the round. The fight was fairly even statistically, with Davis only out-landing Romero 25-22, but with a significant edge in punch accuracy (30% to 19%) according to CompuBox.

After the fight, Romero stated his intention on a rematch, while Davis thanked Romero for accepting the fight.

“I want the fight again,” said Romero. “I exposed him and won every single round. I jumped into something and ate a stupid shot.”

“I was thinking as this interview was coming up and as much as I wanted to be cocky, but I want to thank ‘Rolly,’” said Davis. “I want to thank his team. We settled it like men inside the ring. I wish him the best in the future.”

A two-division champion who landed 54% of his power punches in the bout, Lara waited patiently for his opening against the aggressive O’Sullivan, and broke through for the first time late in round four. He sent O’Sullivan down in the closing moments of the round with a blistering counter left hand that hurt him before dropping him with a straight right hand.

“This new style that I’m demonstrating is for all the boxers to show them how I can fight now, just being able to change up,” said Lara. “He was a tough boxer, too. I’m a smart boxer, a slick boxer, that’s what I did tonight. I waited until he attacked and then I did what I had to do to win the fight.”

O’Sullivan was again saved by the bell in round five, as Lara hurt him as the round waned with a right hook-straight left combination. Showing the precision that has made him renowned as one of the sport’s most skilled fighters for years, Lara struck again at the end of round seven, wobbling O’Sullivan severely moments before the bell rang.

After receiving attention from the ringside physician before round eight, O’Sullivan ran into another straight left hand from Lara early in the round, prompting referee Benjy Esteves to waive off the bout 23 seconds into the frame.

“I saw the opening, he was leaving himself open and that’s when the left came in and knocked him down,” said Lara. “I saw in the eighth round he didn’t have any more power and that’s when I stepped up and showed my power.”

Fighting at the 154-pound limit for the first time since his second pro fight, Santamaria came into this bout off of back-to-back upset victories over Abel Ramos and Devon Alexander, and had strong moments in the fight countering his imposing opponent. Although Santamaria had an advantage in punches thrown (660-625), it was Ramos who held the lead in punches landed (158-142) and accuracy (25% to 22%).

“I could have pressed a little more, gone to the body a little more, but he was kind of slippery in there,” said Ramos. “I didn’t want to risk anything because he would counter so I was trying to stay composed and stay at my distance.”

“The plan was to box him and to get him tired and it was working,” said Santamaria. “I thought it worked. He never hurt me, never felt his power. I was good. I thought he was going to be tough. I’m just as tough as they come.”

Ramos clinched the victory with a strong performance in the closing rounds, eventually earning the decision as he looks to continue improving and rising up the rankings as a top young contender.

“I want whoever they want to put in front of me,” said Ramos. “We’re going to keep going forward and take whatever fight my team thinks is best for me. He won some rounds because I let him work a little too much, but we’re going to keep getting better and grow from this.”

“The first few rounds were even, but after that he only had his jab,” said Ramirez. “I was able to hurt him. He tried to win going backwards and that’s no way to win.”

“I felt I won the fight,” said Melendez. “It’s part of the game. You just have to go back and keep training and just come back better.”

The contest was fought evenly throughout, with both fighters building momentum at certain moments, only to have their opponent fire back to keep the action squared. The punch stats reflected the close nature of the fight, with Melendez holding a 193 to 171 edge in punches landed, while Ramirez bested him in accuracy by a 31% to 29% margin.

Ramirez had his best moments of the fight pushing Melendez back on the ropes, buoyed by a significant advantage in body shots landed (79-16). Melendez was able to avoid taking too much damage with constant activity and sharp counter uppercuts that temporarily halted Ramirez’s forward momentum.

In round eight, Melendez resorted to dropping his hands while on the ropes, in the hopes of catching a hard-charging Ramirez. However, Ramirez would go on to have his biggest advantage in punches landed in that frame (28-19). After a hard-fought round 10 that all three judges scored for Ramirez, he took home the victory with scores of 95-95, 98-92 and 96-94.

“I just have to go back to the drawing board and get better,” said Melendez. “I’m still young. I felt I landed the crisper punches and out-boxed him. He never hurt me. Never.”

“I want to fight for the world title next,” said Ramirez. “I’m ready for any of the top fighters. I don’t shy away from tough challenges.”

Prior to the pay-per-view telecast, bouts streaming on the SHOWTIME Sports YouTube page was headlined by super welterweight contender Luis “Cuba” Arias (20-3-1, 9 KOs) earning a hard-fought unanimous decision over Jimmy Williams (18-8-2, 6 KOs) by the score of 99-91 on each judges’ card. Additional streaming action saw rising prospect Jalil Hackett (4-0, 3 KOs) deliver a second round TKO over previously unbeaten Jose Belloso (4-1, 4 KOs) 2:20 seconds into the round.

The replay will air Saturday, June 4, following the start of SHOWTIME CHAMPIONSHIP BOXING headlined by unified WBC and WBO Super Bantamweight World Champion Stephen Fulton Jr. against former unified champion Danny Roman live on SHOWTIME in a Premier Boxing Champions event from The Armory in Minneapolis. The telecast begins at 9 p.m. ET/6 p.m. PT with the replay of Davis vs. Romero and will then feature WBA Super Middleweight Champion and Minneapolis fan-favorite David Morrell Jr. facing Kalvin Henderson in the co-main event. The event was promoted by Mayweather Promotions, GTD Promotions and TGB Promotions.