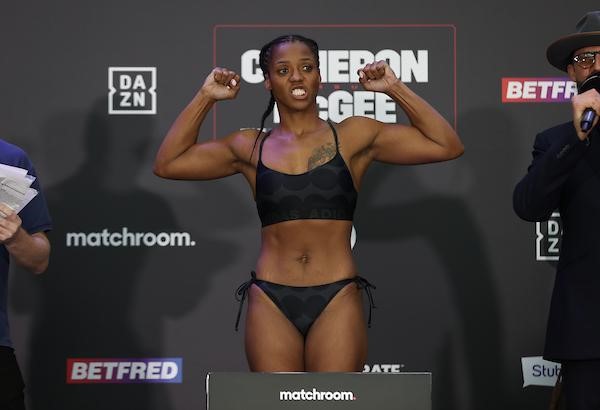 The Ring Magazine Belt will also be on the line.

The fight will headline a card that will be streamed LIVE on DAZN (2 PM ET).

The bout is part of a tournament that will crown an undisputed champion as WBA champion Kali Reis will take on Jessica Camara on November 19th in New Hampshire. The vacant WBO Title will also be at stake.

McGee of Gary, Indiana is managed by Split-T Management under the guidance of Brian Cohen and has an outstanding record of 27-3 with 19 knockouts.

The 35-year-old McGee is a 16 year-professional and had an early win over Kristi Follmer (16-1). Mary won the IBF title with a 10th round stoppage over Ana Laura Esteche on December 5, 2019. She has defended the title once by stopping Deanha Hobbs (8-1) in nine rounds on February 8, 2020, in Hammond, Indiana.

Cameron, 30 of Northampton, England, has a record of 14-0 with eight knockouts.

Cameron is a four-year professional, who has wins over Edith Ramos (5-1-1), Viviane Obenauf (12-3), Anahai Ester Sanchez (19-4). Cameron won the WBC title on October 4, 2020, with a 10-round unanimous decision over Adriana Dos Santos Araujo (6-0) in England. Like McGee, she has one title defense, and that was a 5th round stoppage over Melissa Hernandez on May 29th in Las Vegas,.

“I’ve trained really hard for this fight; I knew a long time ago that I would be fighting Chantelle because I would listen to her saying she wanted to fight one of the champions – I made sure I prepared for her from that day. When I was offered this fight, I was excited because I knew I could sit next to Eddie Hearn.

“I knew that sitting next to Eddie Hearn, and with Matchroom, was one of the pinnacles of boxing. So, to be a female fighter who used to sell tickets out of her car all night just to get a fight, to sitting up here, I’m more than ready. It’s going to be an exciting fight.

“I started boxing when I was 14, I stayed amateur for maybe five years, after winning the golden gloves a couple years in a row, I needed to make a living for myself, so I went pro. They said you could make $100 a round boxing; it was what I loved to do so I said, ‘hey this sounds like a steal for me’. As I got better and kept winning, I realized that my opponents cost more money, so I had to get out and sell tickets night and day just to get on the card and make sure my opponent got paid.

“I know it’s going to be a tough fight; I’ve watched her beat the hell out of girls and I thought, ‘yeah, I’ve got to make sure I get out there and do my real work’. She’s not coming to lose, I made sure I worked hard for her. I take this fight very seriously.

“I didn’t come all the way across the pond just to get beat, it’s going to be a rumble in the jungle, like in the Ali days, she’s not going to just beat me believe that.”

McGee, who is promoted by DiBella Entertainment, weighed 139.6 lbs while Cameron was 139.5