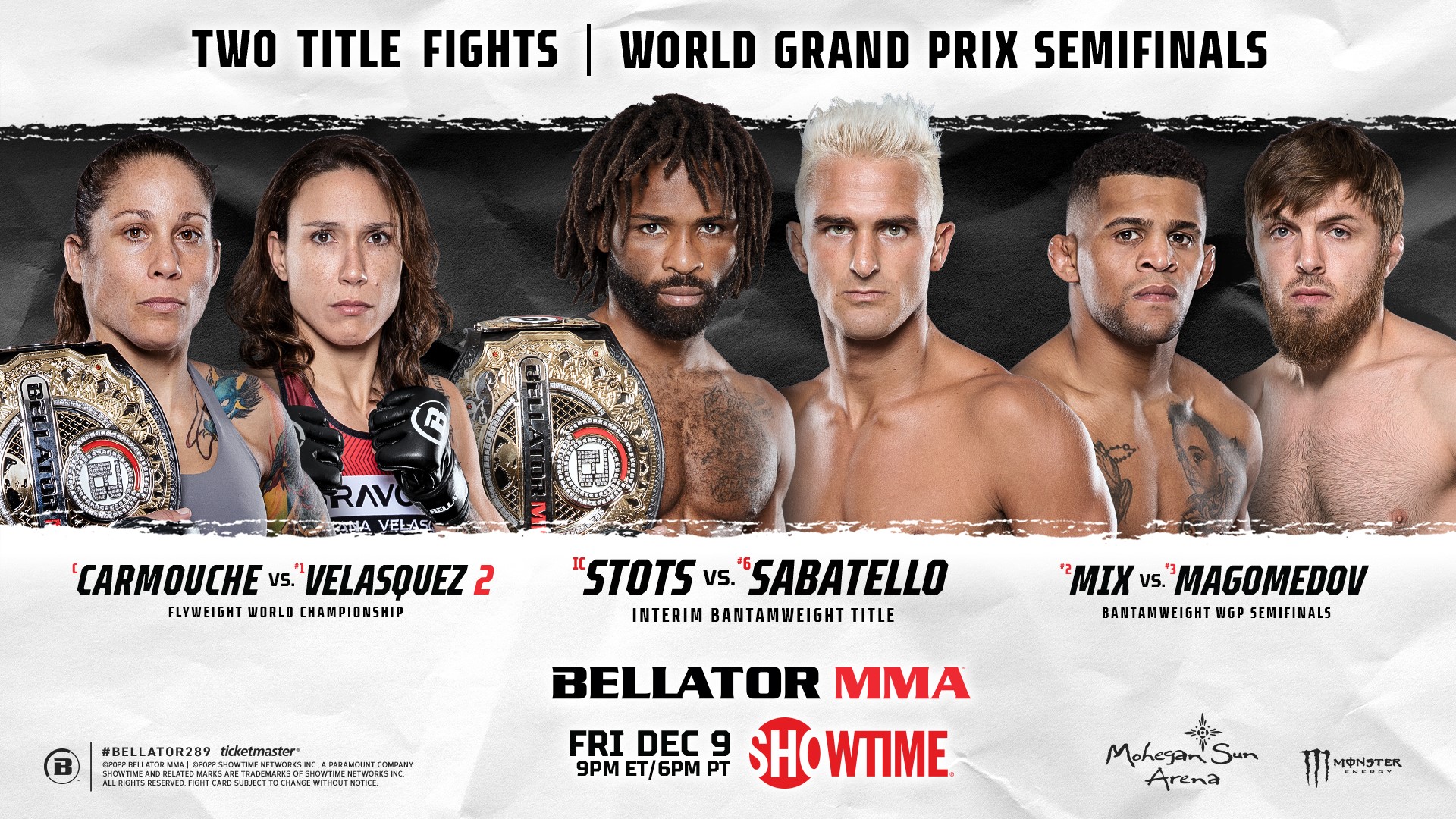 LOS ANGELES (September 14, 2022) — A BELLATOR Flyweight World Championship rematch between Liz Carmouche (17-7) and the woman she defeated for the title, Juliana Velasquez (12-1), is set for the co-main event slot of BELLATOR 289 on Friday, Dec. 9 at the Mohegan Sun Arena in Uncasville, Conn.

The five-round championship contest has been added to a card that already features the continuation of the BELLATOR Bantamweight World Grand Prix Semifinals as Raufeon Stots (18-1) defends his interim championship opposite fast-rising star, the No. 6-ranked Danny Sabatello (13-1), and No. 2-ranked Patchy Mix (16-1) takes on No. 3-ranked Magomed Magomedov (19-2).

All the action will air LIVE on SHOWTIME at 9 pm ET / 6 pm PT, while the preliminary portion of the event will air free-to-watch beginning at 6 pm ET / 3 pm PT on the BELLATOR MMA YouTube channel, the SHOWTIME Sports YouTube channel, and Pluto TV. Tickets for the event are currently on sale at both Ticketmaster.com and Bellator.com.

In addition to the confirmed main card, two bruising preliminary fights are official for BELLATOR 289. The first is a welterweight bout featuring Wisconsin’s Mark Lemminger (12-5) taking on Michael Lombardo (12-3-1), while the second fight is a featherweight tilt pitting highly touted prospect Cody Law (6-1) against fan-favorite Cris “Sunshine” Lencioni (9-3), who makes his return to BELLATOR MMA.

Widely regarded as a pioneer of women’s mixed martial arts, Liz “Girl-Rilla” Carmouche will make the first defense of her newly captured title in an immediate rematch against former titleholder Julianna Velasquez. A quick glance at Carmouche’s recent in-cage exploits will show that the 38-year-old has turned back the clock since signing with BELLATOR in 2020. A professional since 2010, Carmouche has looked dominant on her current four-fight winning streak over ranked BELLATOR flyweights DeAnna Bennett, Vanessa Porto, Kana Watanabe, and Velasquez, scoring three finishes in the process. Carmouche’s fourth-round TKO of Velasquez at April’s BELLATOR 278 in Hawaii served as an emphatic conclusion to her long journey for a world title, setting up a highly anticipated rematch for BELLATOR’s return to the Mohegan Sun Arena on December 9.

While April 22 will be remembered by Carmouche as the day she earned her first MMA world title, it marked a bitter memory for former champion Julianna Velasquez. The 35-year-old Brazilian believes the referee’s stoppage in her fight with Carmouche was premature, and at the time of the finish, Velasquez was up 30-27, 30-27, and 29-28 across the judges’ scorecards. Velasquez will look to prove the ending of their last fight was a fluke, and an immediate rematch gives the former Brazilian national judo champion and jiu-jitsu purple belt an opportunity to get back the lone loss of her professional MMA career, regaining her one-time title in the process.