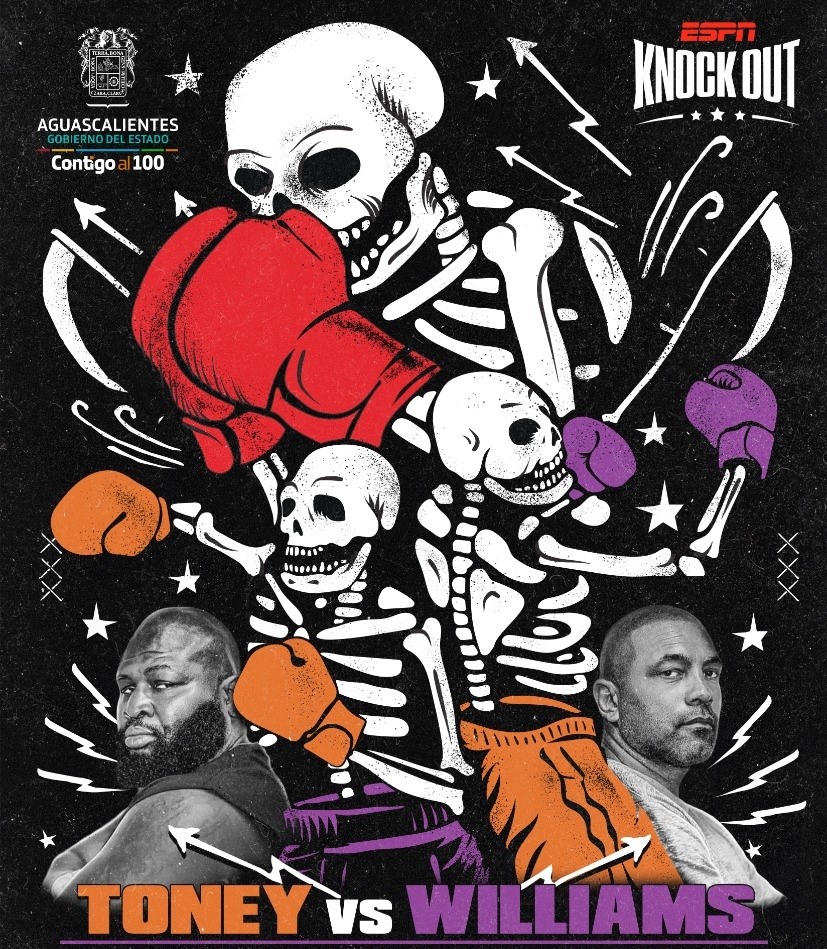 (October 18, 2021) – Boxing Fans! Fill out the Application on bluemoonentertainment.com and Receive a Credential to Watch the Entire Night of Fights for Free!

On Friday, October 29, legendary three-weight world champion and all-time-great James “Lights Out” Toney (77-10-3, 47 KOs) will make a very special return to the ring to face murderous-punching Jeremy “Half-Man, Half-Amazing” Williams (43-5-1, 35 KOs) in an eight-round exhibition bout that will serve as the main event of “Battle of the KO Kings,” a seven-fight night of free professional boxing, presented by Blue Moon Boxing at the Palenque de la Feria San Marcos in Aguascalientes, Mexico, and live streamed on bluemoonentertainment.com, which can be accessed free of charge by signing up to watch.

Although the event is scheduled as an exhibition, both Toney and Williams say they aren’t travelling to Aguascalientes, Mexico to play.

A legendary warrior, 53-year-old Toney, originally from Grand Rapids, Michigan, held the lineal middleweight championship from 1991 to 1993, the IBF super-middleweight title from 1993 to 1994, and won the IBF cruiserweight title in 2003. Toney also challenged twice for a world heavyweight title in 2005 and 2006 and, overall, competed in 15 world title fights spanning four weight classes.

Despite his proven ability to rock much larger opponents with his natural punching power, Toney is best known as a “throwback” defensive and counterpunching specialist, who often preferred to fight off the ropes. Voted Fighter of the Year, both by The Ring magazine and the Boxing Writers Association of America in 1991 and 2003, Toney was named the tenth best middleweight of the last 50 years by The Ring magazine in 2011. An incredibly tough fighter with an unbreakable will, of Toney’s 10 professional defeats, none ended by way of stoppage.

“There’s no such thing as a boxing exhibition,” said Toney in his customarily aggressive manner. “I’m a fighter. I’ll be there to turn the lights out. Evander (Holyfield) thought he was doing an exhibition for fun and he got embarrassed. I don’t play. I’m going to knock his ass out. Call it whatever you want.”

The 49-year-old Williams, one of the most feared heavyweight punchers of the last 30 years, began his career at cruiserweight, but moved up and won the WBC Continental Americas Heavyweight Championship twice, with two of his 35 knockouts coming, incredibly, before 30 seconds of the first round. Williams was trained in Catskill, New York, by the team (Bill Cayton and Kevin Rooney) that produced former heavyweight champion Mike Tyson. He holds a victory over former title challenger “Smokin’ Bert Cooper and fought former world champion Al “Ice” Cole to a draw.

“James Toney is not a true heavyweight and even they can’t take my punches,” said an excited Williams, “I’m a smaller guy with fast hands, he won’t be able to use his smaller size to outmaneuver me. And I punch a lot harder than he does! It’s a matter of time before I catch him with something and finish him for good.”

Todd Lewis, VP of Operations for Blue Moon Boxing, says despite the bravado shown by both warriors, every commission-advised safeguard will be followed in presenting this match-up of ring legends past. And while a stadium full of ticket buyers would be an ideal situation for the fight, the Covid-induced reality is a lot different.

“The commission here is very concerned with the safety of all fighters and they are dictating all the necessary precautions, which will be vigorously followed,” said Lewis. “While we love the idea of seeing these two rivals throw down again, we are not in the business of having a retired fighter take a sustained beating on our air.”

In fact, Lewis says Blue Moon is promoting this fight to gather together lists of fans to market his upcoming ESPN Knockout series of fights to. “Drop us an email at bluemoonentertainment.com and get registered to watch the fight for free,” he continued, “and in the future we will let you know when and where we are doing our next events. It’s that easy.”

Toney vs. Williams will be supported by up to six televised undercard bouts, which will be announced shortly.