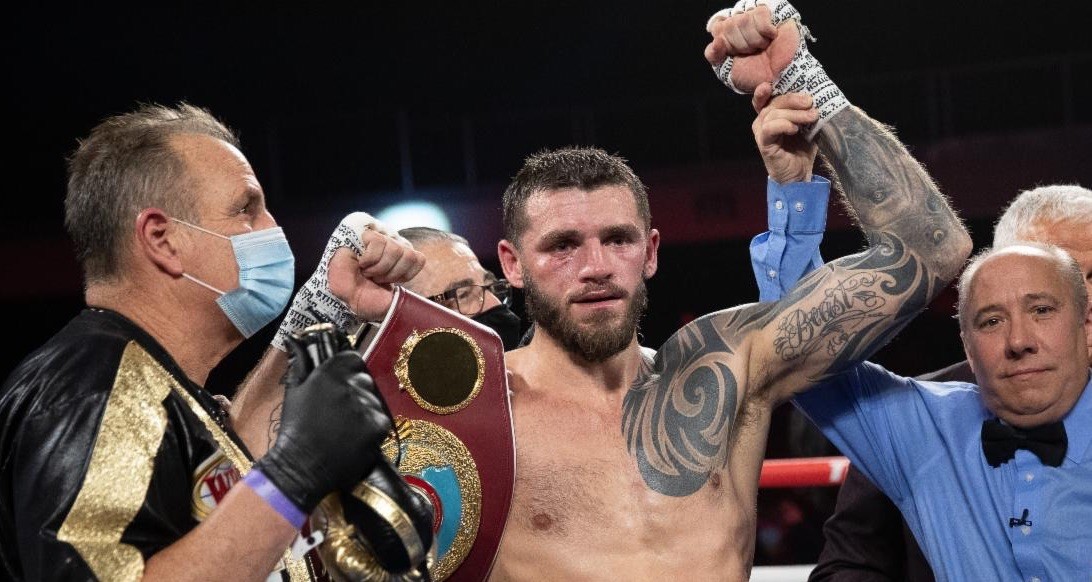 While Geffrard took the fight on 8-days’ notice, Smith Jr. was met with the same unknown of a new opponent after his original opposition Callum Johnson tested positive for COVID-19. Smith came out of the gate strong attacking the high guard of Geffrard in every way. In the second round, Geffrard found small success with a short counter left but would maintain his defensive poise as Smith continued to use his power, wrapping around Geffrard’s high guard.

As the fight found itself in the middle rounds, Smith began to turn up the heat, thrilling the throngs of Smith fans that made the trip to Turning Stone. Attacks to the body from a multitude of angles were landing with force as Smith continued to pounce on the resilient Geffrard. At the end of the fifth round, Smith, throwing with bad intentions, hurt Geffrard, who managed to stay on his feet, saved by the bell ending the round.

By round seven, Smith’s onslaught seemed to take the soul of the Florida-based Geffrard, who could do nothing more than attempt to defend the insane volume of punches by the relentless Smith. After getting pinned in the corner early in the ninth round, Geffrard had clearly taken enough punishment – as sixteen unanswered punches were thrown from the workhorse Joe Smith Jr. Geffrard fell to his knee, where he would remain for the count, ending the fight. Smith’s pressure, punching ability, and volume was simply too much for Geffrard to withstand.

Joe Smith Jr. is eyeing a major fight next, but first, it’s right back to work, “I want to get back in the gym, work on my craft, and get better and better. I believe next time you see me I’ll be ready for anybody” said Smith Jr. As for what’s next for Smith, “If Canelo wants to come to 175 and fight me, I’m ready for him. Everybody would love to see that fight. It would be a big deal. If I got Beterbiev next and beat him, I would want Bivol [after], and unify all the belts, become unified champ and then take out the pound for pound king (Canelo Alvarez).” It is fair to say whomever Smith steps in the ring with next, fans will be in for a treat.

Pittsburgh-based Ukrainian Cruiserweight LYUBOMYR “DEMOLOTION MAN” PINCHUK meant business from the opening bell against tough Washington D.C.-based JOSE MARIO “BAZOOKA” FLORES. The two men went to battle over their entertaining 8-round NABA Gold Cruiserweight battle. Pinchuk successfully controlled the distance, establishing his jab early and often. However, Flores was game from the start, coming forward with a brawler mentality, digging to the body of Pinchuk in a pleasing bout. In the third round, an accidental headbutt caused a cut over the left eye of Pinchuk, but it would seemingly not affect him or his work rate.

In the middle rounds, Pinchuk’s length and combination punching began to take over. As Flores’ stamina began to wane, Pinchuk took advantage finding success with a short right uppercut. Flores who had never been knocked out in his professional career would be buzzed late in the fight, but managed to stay on his feet. As the final bell rang, the fight went to the score cards and Pinchuk was named the new NABA Gold Cruiserweight Champion by unanimous decision (80-72, 79-73 (2x)). With the win, Pinchuk improved to 14-2-1 8KO’s.

Star Boxing CEO JOE DEGUARDIA had this to say on the victories, “Joe Smith proved once again why he’s the working-class hero blue-collar brawler fans have fallen in love with. No matter who he is in the ring with he gives the fans everything he has. His work rate was on full display against Geffrard; he has a motor that does not stop. We are looking forward to some massive opportunities for Joe in 2022, and can’t wait to bring the fans the best fights available at 175 lbs.” DeGuardia continued “Congratulations to Lybomyr Pinchuk who showed a lot of promise in winning the NABA Gold title in defeating a very game Mario Flores. It was a great night for boxing fans in attendance and those watching on ESPN.