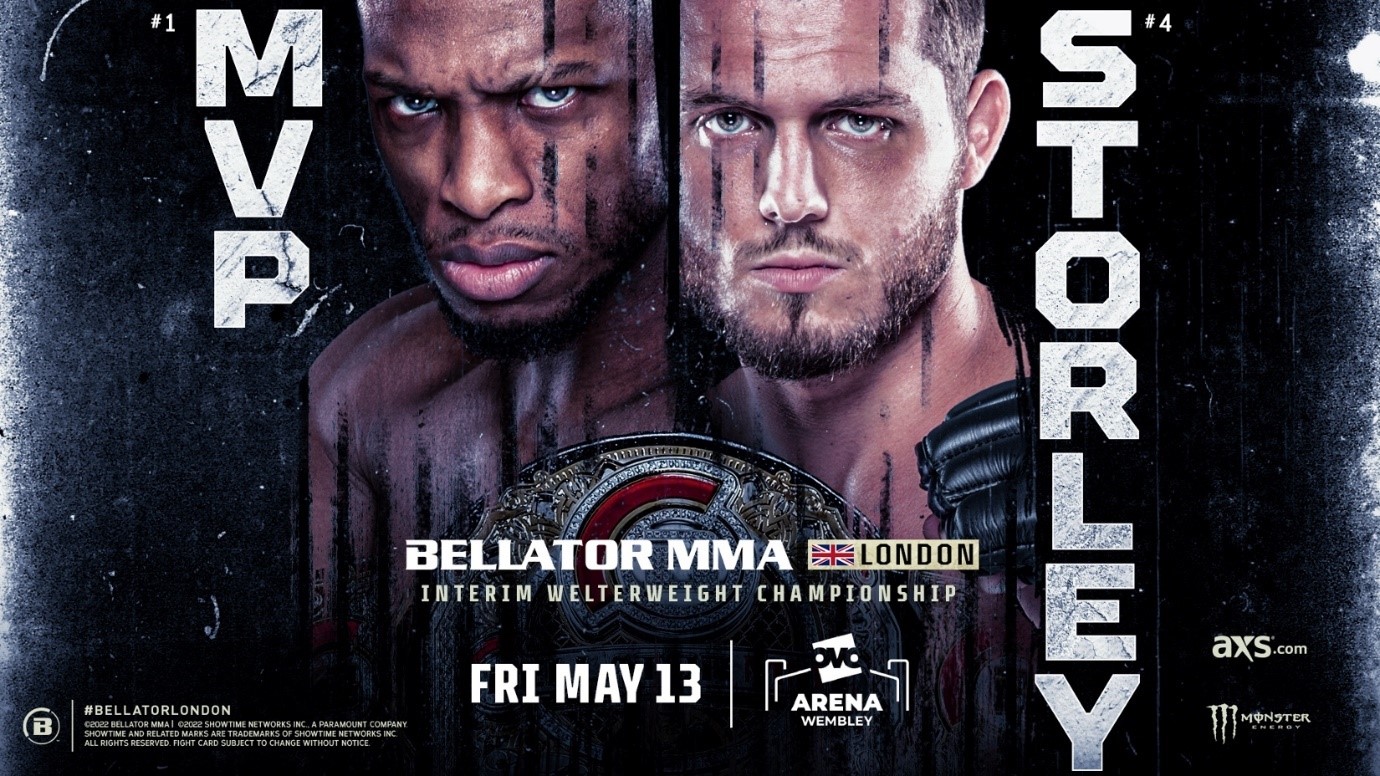 LONDON, UK (May 11, 2022) – With another historic event in London just days away, fighters from BELLATOR MMA 281: MVP vs. Storley spoke to the media today before their highly anticipated bouts on Friday, May 13 at the OVO Arena Wembley.

Tickets for BELLATOR 281 are on sale and can be purchased through axs.com/uk and Bellator.com.

Here’s what the BELLATOR 281 fighters had to say:

“I love London and the energy I get from the supporters, my family and my team. It just feels like everyone is there for me. You guys have seen me bounce off energy, so when I get big energy I just love to show up. For me, the belt is the cherry on top, but I’m going to go out there and do what I normally do, regardless of there being a belt.”

“It’s been different [preparing for this fight]. Although they [Amosov and Storley] are exceptionally good at wrestling, there’s different styles of wrestling. I found Logan’s style more familiar to the majority of MMA fighters, versus Amosov’s style, so technically, it’s been a better adjustment. His striking is nowhere near mine. It’s not even something I’m considering for this fight.”

“I wish Amosov and his family well. Hopefully everything comes to a final conclusion and nobody is suffering.”

“My agent called me and all of a sudden it was time to fly back to Florida and get ready for camp again. It’s a great opportunity to become world champion. Obviously it’s a bad moment for Amosov but I can’t control that and MVP can’t control that. MVP is a competitor and he’s one of the best guys for a reason. I’ve been wrestling since age five at the highest level and I’m going to go out there and give it my all with the of my ability.”

“I think it’s my time and it’s time to show the world who I am against a top fighter like MVP. We both have our gameplans: I want to get my takedowns and do damage on top. You learn a lot about each other once the fight begins, so we’ll see.”

“Obviously I think MVP has proven himself as a top guy and I don’t have anything disrespectful to say about the guy. But we’ve seen the likes of Daley and Lima get to their takedowns and I’m going to try to take full advantage of that.”

“You have to respect him. He’s a great fighter with a great record. But nobody sets up their takedowns like me and they aren’t as powerful on top as me. And most importantly, they aren’t me.”

“I think I’ll get the best version [of Machida]. The people he has lost to are champions and a No.1 competitor. He hasn’t lost to random people who have been dragged in, he’s lost to top people.”

“I’ll stick to what I do. He’s been around for so long and he doesn’t change his game. We’re not going to see a different version of Machida. He’ll come out there and do what he does, nothing is going to change. I will be ready for his style.”

“He’s not my legend and I didn’t grow up watching him thinking ‘This guy’s great’. I came into the sport late and he doesn’t mean a lot to me personally. At the end of the day it is just another fight for me.”

“I feel like when your back’s against the wall you are more dangerous, but you are more susceptible to make mistakes. If he thinks he’ll come in a bulldoze me, he needs to think again.”

“I like to fight here. For me it’s a great opportunity, especially in the OVO Arena Wembley. I’m so grateful to be here. I want to enjoy the fight and the crowd and every moment that I will be in the cage.”

“I feel very good and very calm for this fight. I had a great camp. I know he’s going to be the favorite for the crowd, but what matters is the fight itself. It doesn’t matter what is going to happen outside the cage.”

“He [Fabian Edwards] is a well-rounded, dangerous fighter. He is number four in the rankings and has a good striking and ground game, but let’s see what’s going to happen. The only thing I want to focus on is my game and what I have to do on Friday.”

“I’m able to finish him, that’s why I’m here. Always when I step in the cage, I want to finish my opponent, that’s the main goal. I want to give my best and try to finish him.”