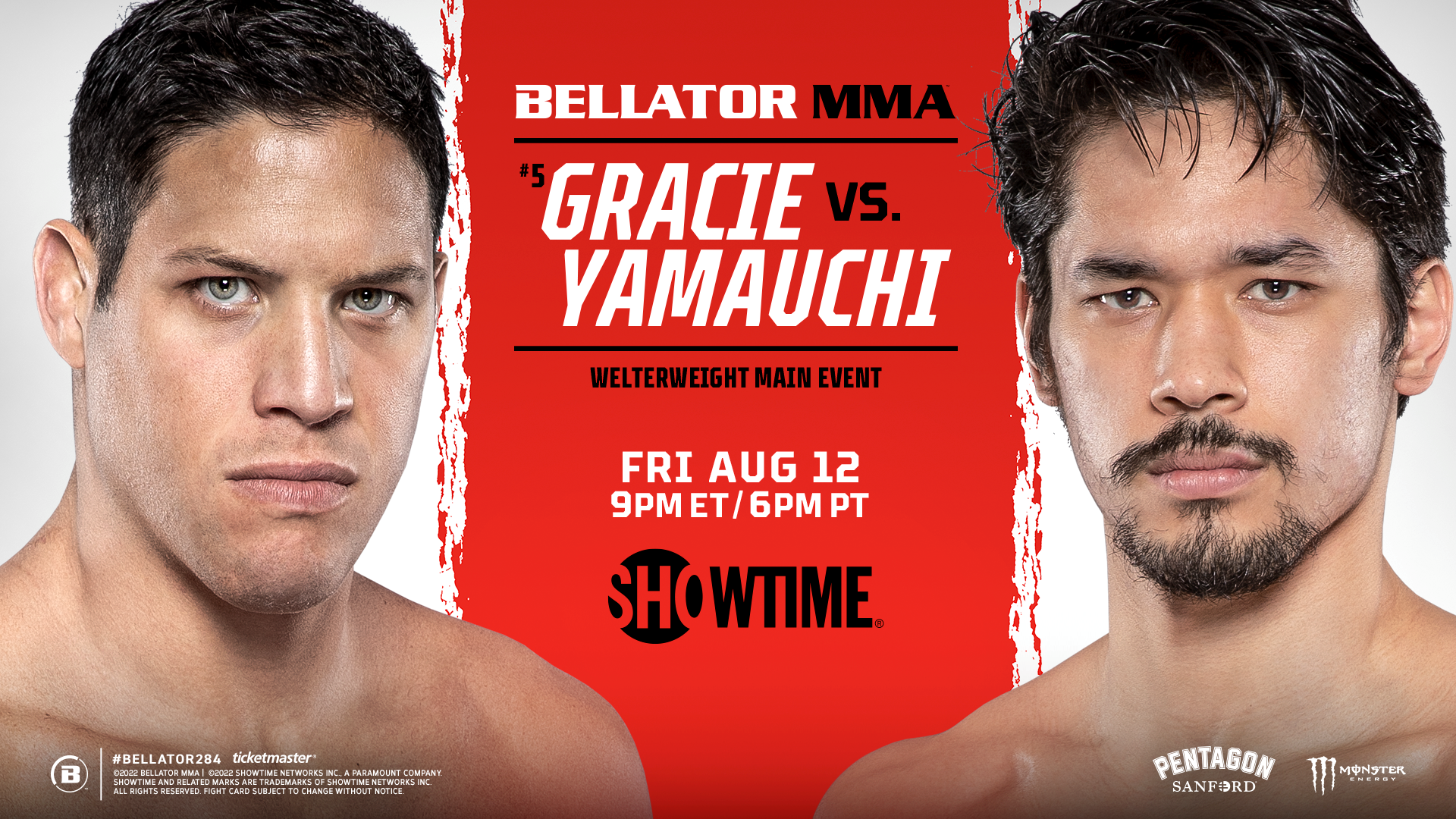 LOS ANGELES (June 15, 2022) — BELLATOR MMA returns to Sanford Pentagon in Sioux Falls, S.D. on Friday, August 12 for what promises to be a thrilling night of world-class mixed martial arts action when No. 5-ranked welterweight contender Neiman Gracie (11-3 MMA, 9-3 BMMA) takes on the man with the most submission finishes in company history, Goiti Yamauchi (27-5 MMA, 13-4 BMMA), in a five-round, 170-pound main event matchup.

Also on the main card, heavyweight contenders in former interim champion Valentin Moldavsky (11-2 MMA, 6-1 BMMA) and the undefeated No. 5-ranked Steve Mowry (10-0 MMA, 6-0 BMMA) will meet in a thunderous clash with the potential to shape championship aspirations.

Former flyweight champion and No. 4-ranked contender Ilima-Lei Macfarlane (11-2 MMA, 10-2 BMMA) will look to return to the win column against Brazil’s Bruna Ellen (6-3 MMA, 4-3 BMMA) on the televised portion of BELLATOR 284.

Tickets for the event start with a special presale beginning this Thursday, June 16. The general on sale begins Friday, June 17 and can be purchased at Sanford Pentagon Box Office & Ticketmaster.

A featherweight bout pitting Brazil’s Weber “The Silverback” Almeida (6-1) against France’s Ilias “The Blade” Bulaid (3-0) is the first fight confirmed for the preliminary portion of the event, which will stream live on the BELLATOR MMA YouTube channel, SHOWTIME Sports YouTube channel and Pluto TV beginning at 7 p.m. ET/4 p.m. PT. Additional bouts will be announced shortly.

After establishing himself as the renowned Gracie family’s foremost talent in mixed martial arts today, Neiman Gracie, 33, has become a staple of the BELLATOR welterweight division over the past several years. His stellar 11-3 record is replete with exciting finishes, including a dazzling fourth-round submission of the decorated Ed Ruth and a 2021 TKO of Mark Lemminger. Against Yamauchi, Gracie will seek to solidify his status as a title contender in an effort to avenge his razor-thin, split decision loss to now-interim titleholder Storley in February.

Opposite of Gracie come August 12 will be Japanese-Brazilian standout Goiti Yamauchi, 29, who will compete in his second straight welterweight bout after a storied career in BELLATOR’s lightweight division. Like Gracie, Yamauchi has wowed fight fans with his dynamic grappling arsenal. He boasts a whopping 21 submission victories in his 27 professional wins, including a first-round armbar of Levan Chokheli in his most recent outing inside the BELLATOR cage. Yamauchi is keen to add to his submission record, especially against a fighter with Gracie’s own submission prowess.

Valentin Moldavsky, 30, has already held BELLATOR interim gold, and he will aim to begin his road back to the title on August 12 in Sioux Falls. The protege of the legendary Fedor Emelianenko fell short to champion Ryan Bader in his most recent performance, but his road to that fight included impressive victories over veterans in Tim Johnson, Roy Nelson, and the surging Linton Vassell. For Moldavsky, this co-main event tilt with Mowry acts as a chance to cement his status as the division’s top contender and set up a rematch with Bader to finally capture the undisputed title.

Steve Mowry, 29, may stand a towering 6’8” tall, but his aspirations in BELLATOR’s heavyweight division may be even higher. The undefeated Sanford MMA product holds a blistering 100% finish rate as a professional, posting four knockouts alongside his six submissions. Mowry’s dominant ascent through the division has culminated in his biggest fight to date against Moldavsky. With a win, Mowry’s hopes of wearing BELLATOR championship gold would take a massive step forward.

Like Moldavsky, Ilima-Lei Macfarlane, 32, is a former champion working her way back into title contention. Hawaii’s Macfarlane holds records in BELLATOR for the most fights, wins, title fights, and title victories in the BELLATOR flyweight division; her four title defenses and one-time twelve-fight winning streak both rank second in their respective records rankings. This decorated BELLATOR veteran will look to return to her winning ways on August 12 against Bruna Ellen, seeking to snap a two-fight skid as she begins her path to a second title reign. Bruna Ellen, 25, is among the youngest women in the BELLATOR flyweight division. Like Macfarlane, she suffered a defeat to now-former champion Juliana Vasquez, but her BELLATOR career has been buoyed by wins over Elina Kallionidou, Desiree Yanez, and Veta Arteaga. In what promises to be the biggest opportunity of her professional career to date, Ellen will try to shock the world with a defeat of one of BELLATOR’s most storied female competitors come August 12.