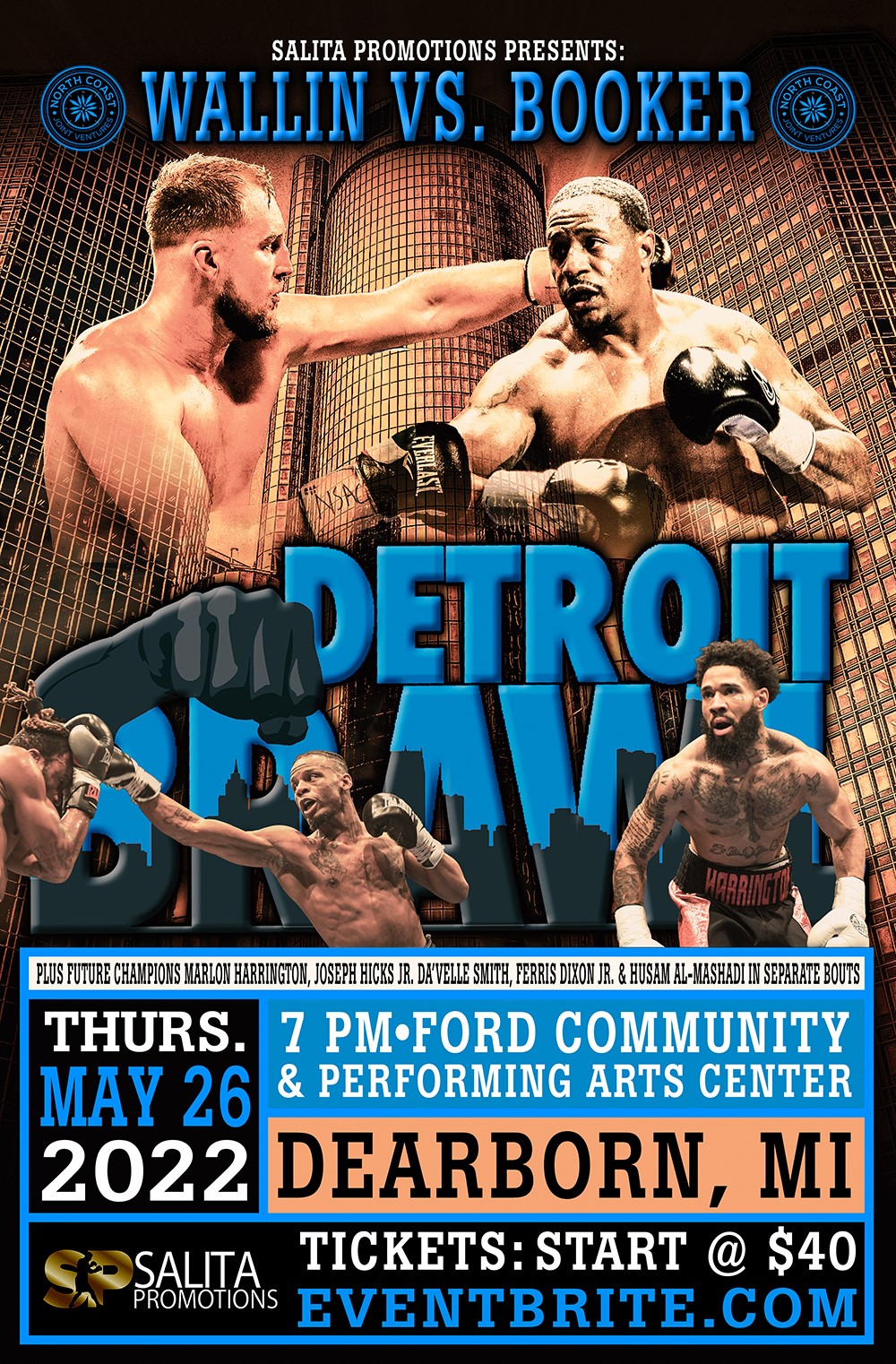 (May 3, 2022) – A 10-round heavyweight main event has been added to Salita Promotions’ special Memorial Day weekend-kickoff Detroit Brawl event, as WBC #11-rated heavyweight Otto Wallin (23-1, 14 KOs) of Sweden will face Detroit’s own Rydell Booker (26-5-1, 13 KOs) on Thursday, May 26, 2022, in the Lincoln Ballroom of the Ford Community & Performing Arts Center in Dearborn, Michigan.

Tickets for “Detroit Brawl” start at $40 and can be purchased by clicking HERE. PLEASE NOTE: Tickets ordered online will be placed in will call at the box office for pick-up. A limited quantity of VIP tickets is also available by calling 313.529.7604.

An athletic southpaw heavyweight who does everything well, Wallin hails from Sundsvall, Sweden. The 31-year-old Wallin made the world stage and captured headlines in 2019 when he waged a thrilling war with linear world heavyweight champion Tyson Fury and came extremely close to scoring a monumental stoppage upset. Then unknown and a 10-1 underdog, Wallin took the fight to Fury early and cut the superstar Englishman for 47 stitches with a surprise left in the third round. What followed was a nail-biting back-and-forth war of attrition that Fury eventually pulled out via close, controversial unanimous decision.

Wallin now lives and trains in New York under the tutelage of popular former two-division champion Joey Gamache at Mendez Boxing in Manhattan. He captured the EBU European Union Heavyweight Title with a 12-round unanimous decision victory over Adrian Granat in April 2018, and has also held the WBA Continental Heavyweight Championship. Wallin was last seen in February of this year, scoring a unanimous decision over Polish veteran Kamil Sokolowski

“Training is going really well,” said Wallin during a break in preparations. “I’ve been getting a lot of work in over the last few months. I saw Booker when he fought Franklin and I know that he’s an experienced and skilled boxer. He’s not someone I will underestimate, but this is a fight I need to win. I appreciate my promoter, Salita Promotions, keeping me active. This is the first time I fight twice in a year since 2019. I’m looking to put on a good performance.”

Inactive for over a decade, in 2018, Rydell Booker won three comeback bouts before losing a televised close 10-round decision to undefeated heavyweight Jermaine Franklin. As an amateur, Booker was the former number one ranked heavyweight in the United States and won the Michigan State and Regional championships every year from 1992 through 2000 and his first national title in 1999.

A capable boxer with excellent counterpunching skills, Booker fought all-time-great James Toney for the IBA World and WBC Continental Americas Heavyweight Championships and lost a 12-round decision in 2004.

All of the Detroit slugger’s losses have come to former champions or undefeated top contenders. An upset victory by the still capable Booker over Wallin would reignite the Detroiter’s once promising career.

“He’s a southpaw that boxes well,” said Booker of Wallin. “Everybody thinks they know how to fight a southpaw, but I fight them totally differently. I’ve been fighting them for years. I’m sparring with lefties every day and training is going well. It would mean a lot to beat Wallin. He’s rated in the world and it would let everybody know Rydell Booker is still here.”

Booker also says his trainer, former female fighter Kara Ro, is making sure he shows up in great shape for the battle. “Kara is getting on my nerves,” he admitted jokingly. “Not in a bad way. She’s a workhorse and it’s good because she’s always pushing.”

“I’m excited to add a heavyweight matchup featuring one of the best heavyweight fighters in the world, Otto Wallin, against battle-tested Detroiter Rydell Booker,” said event promoter Dmitriy Salita. “This fight card is packed with world-class talent and I’m honored for it to take place in Detroit, the city of boxing legends.”

All opponents will be announced shortly and all bouts are subject to change. The Ford Community & Performing Arts Center is located at 15801 Michigan Ave. in Dearborn. On fight night, doors open at 6:00 pm and the action starts at 7:00 pm.