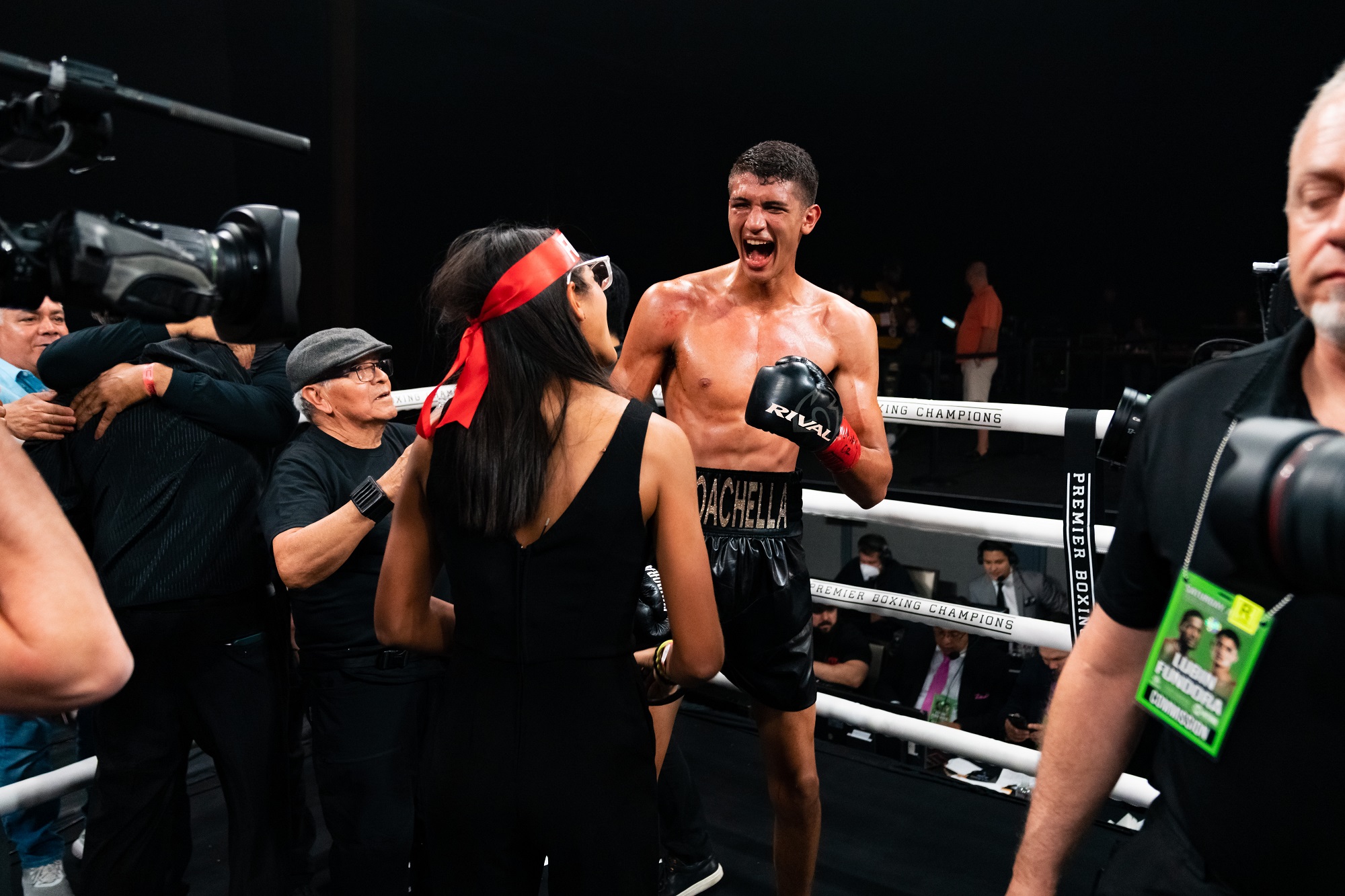 In a bout that lived up to the pre-fight hype, both men hit the canvas and showed tremendous fortitude to recover from knockdowns and continue to deliver massive blows. It was the six-foot, six-inch Fundora who struck first with a sweeping right uppercut that sent Lubin to the mat during the final seconds of round two.

“I think this was probably my best performance ever,” said Fundora. “It was a back-and-forth fight. He really brought his hammer but I decided to bring my drill. The uppercut was landing like no other. The uppercut is my lucky punch. I’m here in Vegas, so I feel a little lucky, and that’s my lucky punch. It lands most of the time with everybody. Southpaw. Right hand. It doesn’t matter. Once I find that, I feel like the job’s done.”

Despite appearing on shaky legs after round two, Lubin recovered in the final minute of round three to bloody Fundora with a series of head shots. Lubin won three of the first four rounds on all three scorecards, buoyed by a bruising body attack against his taller opponent.

In round seven, Fundora and Lubin engaged in a surefire Round of the Year candidate, as both men took serious damage. Fundora’s nonstop volume began to show dividends on Lubin’s face, which started to swell up from damage during the frame. However, Lubin showed championship mettle by turning the tide with an unrelenting series of hooks that eventually forced Fundora to take a knee, the first time he’s been down as a pro.

“I got hit with a good punch and I didn’t feel like I needed to get hit again so I took a knee to get a little breather in and I recovered,” said Fundora. “I intentionally took a knee. I knew I had to take a knee because if I kept getting hit like that it wouldn’t be smart for me and I wouldn’t be able to recollect myself.”

After rising to his feet after the knockdown, Fundora recovered to out-land Lubin 26 to 12 and 28 to 3 in rounds eight and nine respectively, according to CompuBox. Overall, Fundora out-landed Lubin 255 to 149, while Lubin held a 40% to 36% advantage in punch accuracy. Lubin had early success with his jab, landing 18 over the first three rounds, but only connected on 15 throughout the rest of the action.

After a one-sided round nine, and with swelling continuing to grow around Lubin’s face, his trainer Kevin Cunningham asked referee Russell Mora to stop the fight, officially ending the action via a TKO after nine rounds. At the time of the stoppage, Lubin led 85-84 on two judges’ cards, with the third judge scoring the fight 85-85.

“I think it was a good decision for Kevin Cunningham to stop the fight,” said Fundora. “His face shifted from round one to round nine. It completely morphed and there was a lot of blood coming out. He’s a tough fighter. He was in the game the whole time but there’s no need to get hurt that much.”

Lubin was taken to UMC Trauma Center for further observation post fight. For Fundora, he puts himself in position to face the winner of the undisputed 154-pound title rematch between Jermell Charlo and Brian Castaño, taking place May 14 on SHOWTIME.

“I see Charlo winning the fight against Castaño,” said Fundora. “I feel like he’ll be too strong for Castaño the second time. If Castaño wins, that’s great too. I just want to go after all of them. This is the interim belt so I want the world champion title. I want the real deal.”

“I pitched a shutout against a guy who just fought a guy that’s in the main event right now,” said Harrison. “Muscles are the way in the street, but skills pay the bills.”

Garcia applied pressure from the outset, looking to swarm Harrison and trap him on the ropes in an attempt to become the third fighter ever to stop the Detroit-native. Harrison adjusted quickly to the tactics however, and by round four was peppering Garcia with hard jabs to stop him in his tracks again and again.

“All I needed to do was land one good punch, but I didn’t,” said Garcia. “Harrison fought his fight and was very smart with his jab and his elusiveness, major credit to him.”

As the fight progressed, Harrison varied his attack and had consistent success landing powerful blows to Garcia’s head. Harrison dominated the punch stats, connecting on 197 shots to Garcia’s 103, despite Garcia throwing over 100 more punches (592-491). Harrison’s sharpness was also reflected in his 51% connect rate on power punches.

“He was swinging for the fences,” said Harrison. “When he was missing shots, all I heard was ‘whoosh!’. I felt it. I was trying to throw a few more counter shots in between. My composure was everything.”

Garcia remained game throughout and was determined to keep coming forward until the final bell, but the veteran Harrison showed ring savvy as the Spaniard’s punches were never able to bother him. After 10 rounds, all three judges scored the fight in favor of Harrison with two scores of 100-90 and one tally of 98-92.

“I can put on a show all I want, but the bottom line is that I need wins and I have two losses in a row instead,” said Garcia. “Reality is that I’m not at a championship level yet, but I’ll keep fighting.”

“The first thing I’m going to do, I haven’t seen my kids in six months,” said Harrison. “I want to see my kids. My step two, I have a gym called Superbad Fitness. Every time it rains, it pours in the inside of my gym. My job is to find guys that can donate to our non-profit to save about a hundred kids that work out in my gym every day. That’s step number two for me. Step number three for me, I’m going to take a vacation.”

The tactical affair saw Perrella establish his jab from the outset, a punch he landed 64 times throughout the contest. Perrella, who is trained by Hall of Famer Roy Jones Jr., combined consistent movement with the jab, which slowed Salgado from putting together consistent offense.

“I thought my game plan and execution was great,” said Perrella. “I boxed smart. I broke him down. I’m not going to run from him. He was just winging big shots any time I would step in just trying to knock me out with one punch. I kept the jab in his face. Jabs to the body. Left hands. I hurt him. Everything was going great and it looked like I was sweeping all the rounds.”

For Salgado, he was able to keep the fight close with a consistent body attack, out landing Perrella 44 to 27 on body shots, in addition to a 37 to 34 edge in power punches. Perrella landed the most impactful fight of the punch, connecting on a sharp left uppercut that caused Salgado to stumble in round five.

All three judges agreed on only three of the ten rounds throughout the closely contested duel, eventually leading to the split-draw by scores of 97-93 for Perrella, 96-94 for Salgado and the 95-95 draw. After the fight, both men believed they had done enough to have their hand raised.

“I was shocked by the decision,” said Perrella, who fought to a draw against Tony Harrison in his last outing prior to Saturday night. “Two draws in a row. I put my all into this and I get robbed at the end of the day. It’s a tough pill to swallow. I easily out boxed him. He barely landed any punches. I don’t know what more I can do. I did my best. It is what it is.”

“I felt like I won,” said Salgado. “All Perrella did was run around and away from me. Maybe if I had pressured a bit more, that last judge would have leaned more in my favor. Perrella kept throwing his jab but almost never connected. I think that tonight was definitely a positive step in the right direction towards becoming the next Mexican star in the United States, and I look forward to pleasing the fans with more Mexican-style fights in the future”