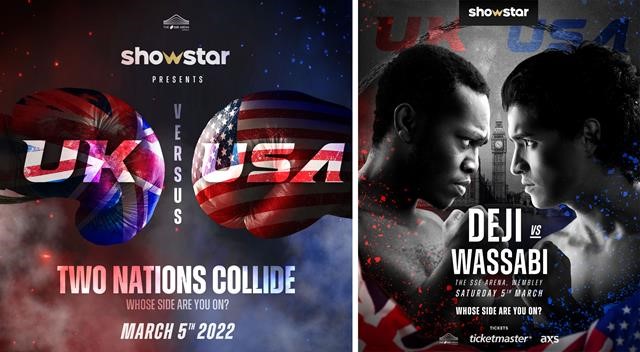 (January 27, 2022) – The SSE Wembley will host a night of unmissable boxing action as YouTube and Social Media powerhouses from the UK and USA clash in a battle for cross-Atlantic bragging rights in one of the most highly anticipated events of 2022. With the main card ﬁghters alone delivering a reach of over 100 million followers across social media, this event is unique in its ability to generate viewing numbers globally.

Taking place 5th March, Showstar Boxing 2022 represents an exciting new era for the fast-growing sport of influencer boxing. In a bold step forward by new promoters Showstar, the fighters will wear 12oz gloves and no headgear, thus raising the stakes and the likelihood of more knockout action. Since KSI and Joe Weller first squared up in 2018, the influencer boxing scene has exploded with Jake Paul, Deji, Logan Paul and Bryce Hall all helping to bring in millions of new eyes to the sport – which has resulted in legends like Mike Tyson and David Haye both championing this innovative new strand of the sport.

The Fight Card: KSI’s brother Deji represents #TeamUK against arch-rival and #TeamUSA’s Alex Wassabi in the main event. Co-main plays witness to the Beta Squad squaring off against the Faze Clan, as UK’s King Kenny goes toe to toe with US’ Faze Temperrr. The 6-fight card also includes an exciting heavyweight bout between social media athlete Armz Korleone and musician Minikon, with the hugely popular influencers Kristen Hanby and Vitaly making up the rest of the card announced so far.