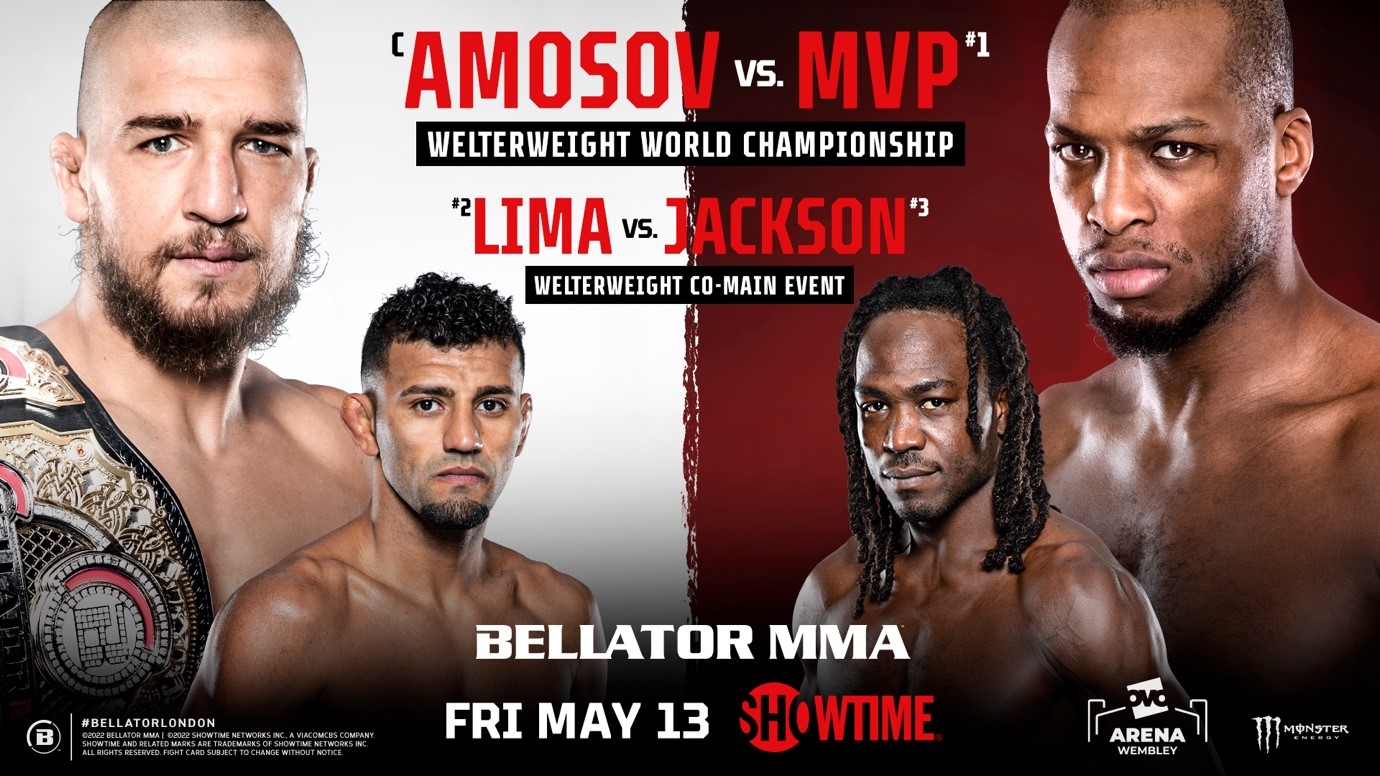 With an electric atmosphere expected in London, fans will be treated to a mouthwatering welterweight co-feature as former champion and No. 2-ranked Douglas Lima (32-10) takes on No. 3-ranked Jason Jackson (15-4). British fan favorite Luke Trainer (5-0) will be looking to make the most of his home crowd advantage when he faces Simon Biyong (7-2) in a light heavyweight match up packed with knockout potential.

The promotion’s exciting return to OVO Arena Wembley for BELLATOR LONDON: Amosov vs. MVP, sees home favorite No. 1-ranked Michael “Venom” Page (20-1) look to steal the world welterweight title from the undefeated champion, Yaroslav Amosov. The Ukrainian, who is 26-0, will be aiming to spoil the party in MVP’s own backyard, and deny the Londoner a slice of MMA history in the process.

BELLATOR LONDON: Amosov vs. MVP will be broadcast live in the UK at 9 p.m. GMT/4 p.m. ET on BBC Three and BBC iPlayer, following last week’s announcement of the major UK broadcast deal with the BBC. SHOWTIME will televise the fight live in America.

Tickets for the event are on sale now and can be purchased online from axs.com/uk  and Bellator.com.

Douglas Lima is also set for another visit to the English capital, following his headline bout against MVP last year, with a return to winning form on his mind in familiar territory. He takes on Jason Jackson in what is set to be another exhilarating clash. Lima is one of the most experienced fighters on the Bellator roster and will be hoping to add to his 32 career victories. Standing in his way is the formidable challenge of “The Ass Kicking Machine” who is performing true to his nickname with five straight victories. Jackson’s most recent win was a convincing unanimous decision triumph over Paul Daley at Bellator 260 and he’ll be hoping to continue his strong professional record.

After a devastating knockout victory over Yanick Bahati in his biggest test to date at Bellator 267 in London last year, Luke Trainer will be looking to extend his unbeaten professional record to six fights as “The Gent” takes on Simon Biyong. With both fighters possessing genuine knockout power, the Cameroonian will hope to get on top in the striking exchanges and silence a partisan crowd. Trainer returns to home turf looking to continue his journey as one of Bellator’s fastest rising stars after an explosive performance last time out.

In addition to the aforementioned bouts, Londoner Alfie “The Axe Man” Davis (14-4) is also set to make a homecoming when he takes on fellow countryman Tim “The Experiment” Wilde (14-4) in a lightweight preliminary bout. The pair were due to meet in 2020 but will clash in front of their home faithful in a domestic clash that is certain to grab the attention of English fight fans. “The Axe Man” will be searching for the form that saw him go four fights undefeated prior to a unanimous decision loss last time out at Bellator 259. Wilde will not be in accommodating mood however, as he aims to string together three consecutive victories for the first time in his Bellator career.

There is another English talent on show in the women’s flyweight division as former title challenger Kate Jackson (11-5-1) takes on Greek athlete Elina “Gunner” Kallionidou (8-4). Jackson will be backed all the way by the London crowd but faces an opponent who was victorious on her last appearance in Wembley with a first-round stoppage victory at Bellator 267.