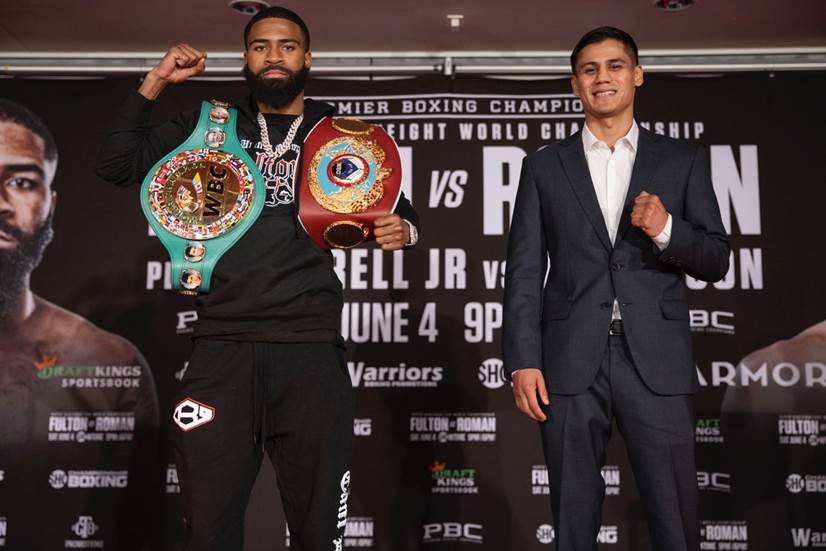 MINNEAPOLIS – June 2, 2022 – Unified WBC and WBO 122-pound world champion Stephen Fulton Jr. and former unified champion Danny Roman went face to face for the first time Thursday at the final press conference before they meet in the SHOWTIME main event this Saturday, June 4 from The Armory in Minneapolis in a Premier Boxing Champions event.

The press conference also featured WBA Super Middleweight Champion and Minneapolis fan-favorite David Morrell Jr. and Kalvin Henderson previewing their co-main event showdown on the SHOWTIME CHAMPIONSHIP BOXING® telecast beginning at 9 p.m. ET/6 p.m. PT. Kicking off the telecast will be the premiere of Gervonta Davis’ sensational stoppage of Rolando Romero last Saturday night as he defended his WBA Lightweight Title in front of a star-studded, sold-out crowd that included celebrities across the entertainment and sporting gamut.

Philadelphia’s Fulton will look for another signature victory on Saturday, after unifying super bantamweight titles last November by winning a close decision over Brandon Figueroa in one of 2021’s best fights. He will be opposed by Los Angeles’ Roman, who can regain his unified status in the division in a matchup built to deliver fireworks.

“I’ve been recognized more since unifying the titles and it feels great to be able to take pictures with my fans.

“It meant everything to me to unify the belts because I said I wanted to do that. When I won my first title in early 2021 and then unified later in the year, that was an amazing feeling because I’ve been through some things leading up to that fight. Not just my camp, but home. So there was a lot going on with me. But mentally I was there and I stuck through it and unified and now I’m here.

“The last four fighters I faced were undefeated, so I’m used to this road. I always step up to the occasion. I always show up when I get to these stages. My whole life has been like that. Right now I am living in the moment. I haven’t been looking past anything. We’re living for today. So when Saturday comes, I’m going to live for it and have fun and I’m going to enjoy it. I’m going to enjoy defeating him.

“He’s lost three times, and maybe one draw. There’s four ways to get to him. There’s no way to get to me yet. There’s no one who’s figured that out.

“I’m more focused. I’m hungry. It’s gonna be a good fight. Just be there. I’m going to have fun. I’m going to have a ball in that ring. I feel like when I took it serious earlier in my career, I wasn’t having any fun. Now I’m taking the risk. That’s why I picked him and chose him.”

“This is the biggest opportunity of my life and we’re here to take advantage of it. I’ve had obstacles too. When I lost my titles to MJ, [Murodjon Akhmadaliev] there were politics involved. But that’s boxing and now I’m focused on who’s in front of me now and that’s Stephen Fulton. I’m not overlooking my opponent.

“It’s been a year since I last fought, and I’m paying attention to that. This opportunity doesn’t come around twice so I know what I have to do to get that ‘W.’ I’ve been in his position before and you don’t want to lose those belts. I was a unified champion too. So I know what it takes. He’s going to try and look his best, and I’m going to go in there and give everything I have to get him.

“This fight will be like a chess game and whoever can make the right adjustments will win the fight.

“We’re going to have fun. I expect a great fight. He’s giving his best, I’m giving my best.

“It means everything to represent my Mexican-American culture. We’re just another step away toward making history just like the great Mexican fighters. It means a lot.

“I came here from Cuba in 2019 and I’m so happy that I was able to follow the guidance of Luis DeCubas Sr. and be embraced so much by the state of Minnesota. It has allowed me to pursue my dreams and be at a high level in my career as a fighter in Minneapolis. Every fight that I have here at The Armory becomes more meaningful. The support of the people here means absolutely everything to me.

“I’m glad that Henderson has the confidence that he thinks he’s going to win. I appreciate that. But it’s a shame that he’s going to go home with a loss. I’m happy that he’s confident like that because we’re going to put on a great show. But at the same time, when he says that he’s going to come and win, that’s not going to happen.

“This fight is all about opening more doors for me. In more than one way. First of all, this is my first time fighting on SHOWTIME. I won’t take that for granted. I know that if I perform well on this stage, doors will open for me with SHOWTIME and with my career. Winning this fight is going to allow me to fulfil the projects and the fights that I want to have later on in my career and later on this year.

“My prediction for Saturday is that I will be happy. I don’t have time for pain. I’m too happy right now. My little brother asked me for a knockout between rounds one and five, and I guess I’ll have to come through for him. That’s my prediction.”

“This is a huge opportunity. I have a huge chance to come in here and try to dethrone the champ. I just want you guys to know that we’re not  here to say, ‘We’re here for the experience.’ Or just to say, ‘We got an opportunity to fight for the title.’ We’re here to fight and we’re here to win.

“All of the pressure is off of me. Everybody’s expecting me to come in here and lose and lay down. The pressure is on the champ. We’re in his hometown in America. Everybody is expecting him to do great things, so I just have to go in there and show out and do what I do best.

“I ain’t worried about the crowd being pro-Morrell. It’s not my first time doing this and skills travel. My prediction for this fight is pain.”