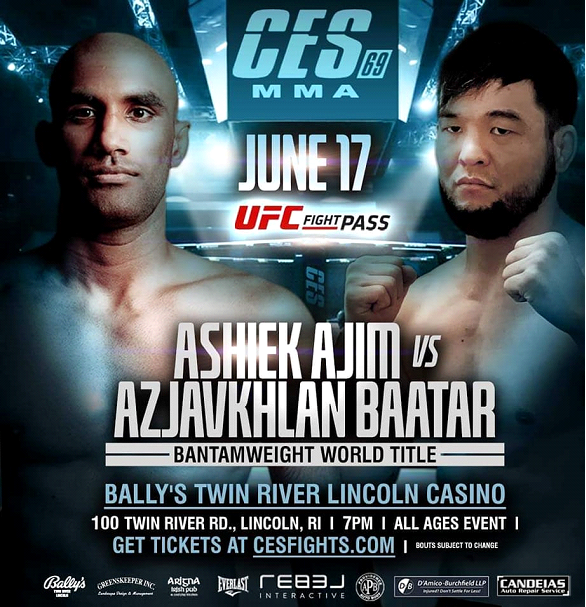 Ajim makes his seventh appearance with the promotion and first since November in the five-round main event against Baatar for the promotion’s world bantamweight title, which is once again up for grabs due to a breach of contract by former title-holder Diego Silva.

CES 69 also features a light heavyweight showdown between Mike Rodriguez of Boston, who is making his long-awaited homecoming following a five-year stint with the UFC, and Brazilian Marcus Vinicius; plus an all-New England bantamweight showdown between Richie Santiago of Milford, MA, and Harris Bonfiglio of Gilford, CT.

Ajim’s long, winding journey to a world-title shot finally comes to fruition June 17. The New York native was originally supposed to fight for the bantamweight belt at CES 66 in February against then champion Jay Perrin, but Perrin got the call to face Mario Bautista at UFC Fight Night: Walker vs. Hill just weeks before the event, so Perrin subsequently vacated the title, leaving Ajim without an opponent. Plans to salvage the bout were scrapped shortly thereafter when Ajim broke his nose sparring. The title instead went to Silva, who beat fan-favorite Andre Soukhamthath at CES 68, only to have his title stripped due to a breach of contract.

Nearly three months later, the title is once again vacant and Ajim (5-1) now has a second chance at championship glory against the durable Baatar (8-6), who made his promotional debut at CES 67 in Connecticut with an impressive win over Johnny Lopez. Ajim has proven worthy of a title shot with a string of dominant victories on the New England circuit, including wins over Arslan Otchiyev, Andres Rodriguez, and Carlos Espinosa. Prior to beating Lopez at CES 67, Bataar fought for MGL-1 Fighting Championships in Mongolia and Fighting Nexus in his native Japan. He now lives and trains in New Mexico and carries a four-fight win streak into CES 69.

The 33-year-old Rodriguez (11-7) returns to CES for the first time since 2017 following a long stretch with the UFC that included wins over Adam Milstead and Marcin Prachnio. He is part of the esteemed CES-to-the-UFC fraternity, having gone 6-2 with CES before getting the call to compete on Dana White’s Contender Series 5 in August of 2017. Rodriguez’s victories on the regional circuit include a CES record 7-second knockout win over Hector Sanchez at CES 41, one of five first-round knockout wins during his time with the promotion. He aims for his first victory in nearly two years at CES 69.

The Santiago-Bonfiglio could steal the show. Santiago (8-4) began his career with six consecutive wins under the CES banner, which he parlayed into an appearance on Week 2 of the Contender Series in 2019. He is 8-1 lifetime with CES and searching for his first win since January of 2020. Bonfiglio (4-1) made his CES debut in September of 2019 in a loss to Jornel Lugo, but has since won his last two fights, including an arm bar submission win over veteran Jason Huntley at CES 67.