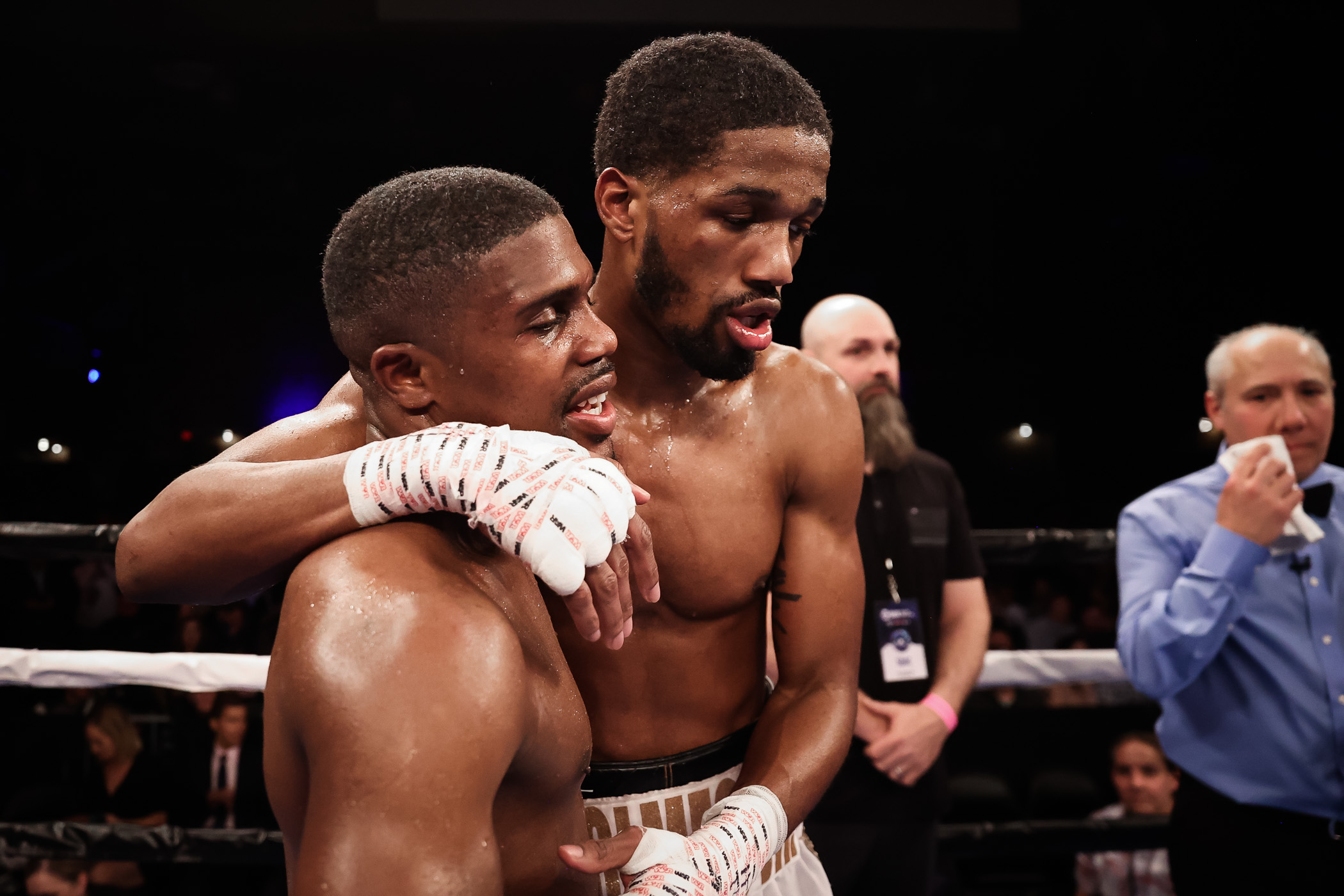 DEADWOOD, S.D. – March 11, 2022 – Ardreal “Bossman” Holmes fought through injury and survived a tough test in his return to the ring for the first time in 28 months scoring a unanimous 10-round decision over Vernon “Sub Zero” Brown in the main event of SHOBOX: The New Generation as part of an action-packed tripleheader on SHOWTIME Friday night at the Deadwood Mountain Grand in Deadwood, S.D.

The Flint, Mich., middleweight prospect Holmes (12-0, 5 KOs) remained undefeated fighting past the eighth round for the first time in his career even while hurting his left hand sometime in the second round during a flurry of punches. The scores were 98-92, 97-93, 96-94 as Holmes seemed to get his second wind as the fight progressed over Chicago’s Brown (13-2, 9 KOs).

“I was reborn tonight,” Holmes said. “This performance showed that I still have it in me. I hurt my left hand in the second round. I couldn’t punch how I wanted to. I was in a bunch of pain but I pulled through. Thinking about my family pushed me through the pain.”

“He was the better man tonight,” Brown said. “I give it up to him. He studied me. He knew the punches I was going to throw. His corner kept yelling, ‘Watch the right hook.’ He did knock the wind out of me a couple times with body shots. I had to take a second to recover. In the last round, he was catching me with head shots.

Holmes said no matter how much Brown hurt him, he was going to push through the pain. “I was rusty. I believe I need another fight to get the rust off. My timing wasn’t there. I’ve been off for like 800 days, but this fight showed that I have a lot of heart. I want Paul Kroll next. He was talking a lot of junk against me. We have a history in the amateurs. He’s who I want.”

In the co-main event, heavy-hitting lightweight Edwin De Los Santos (14-1, 13 KOs) scored a devastating second-round knockout against Luis Acosta (12-1, 11 KOs), who suffered the first loss of his career. Acosta became the 211th fighter to have his undefeated streak snapped in the 21-year history of the prospect series.

“One-hitter quitter for De Los Santos!” SHOBOX analyst Brian Campbell said of De Los Santos’ clean left cross that sent Acosta to the canvas as referee Mark Nelson signaled the end of the fight at 48 seconds in the second round.

“It was a left hand that was just a thing of beauty,” said International Boxing Hall of Famer and SHOBOX blow-by-blow announcer Barry Tompkins.

“I’m back,” said De Los Santos, who suffered a loss in his first SHOBOX appearance in January to William Foster III. “Everyone was counting me out after the last fight. They thought I was done after the loss to Foster. But I’m back. This is the kind of statement that I should have made last time. This is a new beginning for me. I thought I was going to catch him later in the fight but the opening came early with the straight left. My preparation was just better this time, I was just more focused and better prepared and this was the result. I’m ready for anyone.”

In the telecast opener, highly regarded prospect Giovanni Márquez (1-0) became the seventh fighter in the history of SHOBOX to make his professional debut on the series, extending the streak to 7-0 in those bouts as Marquez scored a four-round unanimous decision over a game Nelson Morales. The scores were 40-36, and 39-37 twice in the welterweight bout.

“I felt great,” said Marquez. “I hurt my left hand in the second round on a jab. I think I would have been able to stop him if I hadn’t hurt my hand.”

With his father and trainer, former world champion Raul Marquez, barking instructions from his corner, Houston’s Márquez – the 2021 national Golden Gloves 152-pound champion – dominated the welterweight affair, displaying his offensive skills and using his jab and uppercut effectively as the quicker and busier fighter. Marquez landed 30 percent of his total punches (85 for 280) compared to Morales at 21 percent (42 to 201).

“All the attention, it’s really not normal for a 21-year-old,” said the elder Marquez, as he joined Tompkins and Campbell in the booth before the main event. “He handled all the pressure. I’m really proud of my son. I’m very satisfied.”

Added Giovanni: “It was a great experience. He was a tough, durable guy, but I feel like I handled everything, the cameras, all the attention pretty well. I started a little slow but after the first round I settled down and fought my fight. I felt fine without the headgear. We kept bumping heads, but he never hurt me. There was a lot of pressure on me, and I was a little nervous in the leadup to the fight, but once I got into the fight I relaxed and I felt comfortable. Overall, it was a great experience.”

Following a competitive first round, the 21-year-old Marquez dominated the second round, his confidence surging with every second that passed against the Dominican-born Morlaes.

“I think I did OK,” said the 30-year-old Dominican Republic-born Morales (2-1) now living in Scranton, Pa. “My strategy was to go in and box. He cut the ring off and applied good pressure. I can’t say too much because it wasn’t the best of me. He was OK. I’ll be back.”

The event was promoted by Holden Productions. The SHOBOX tripleheader will re-air on Tuesday at 10 p.m. ET/PT on SHOWTIME EXTREME®.