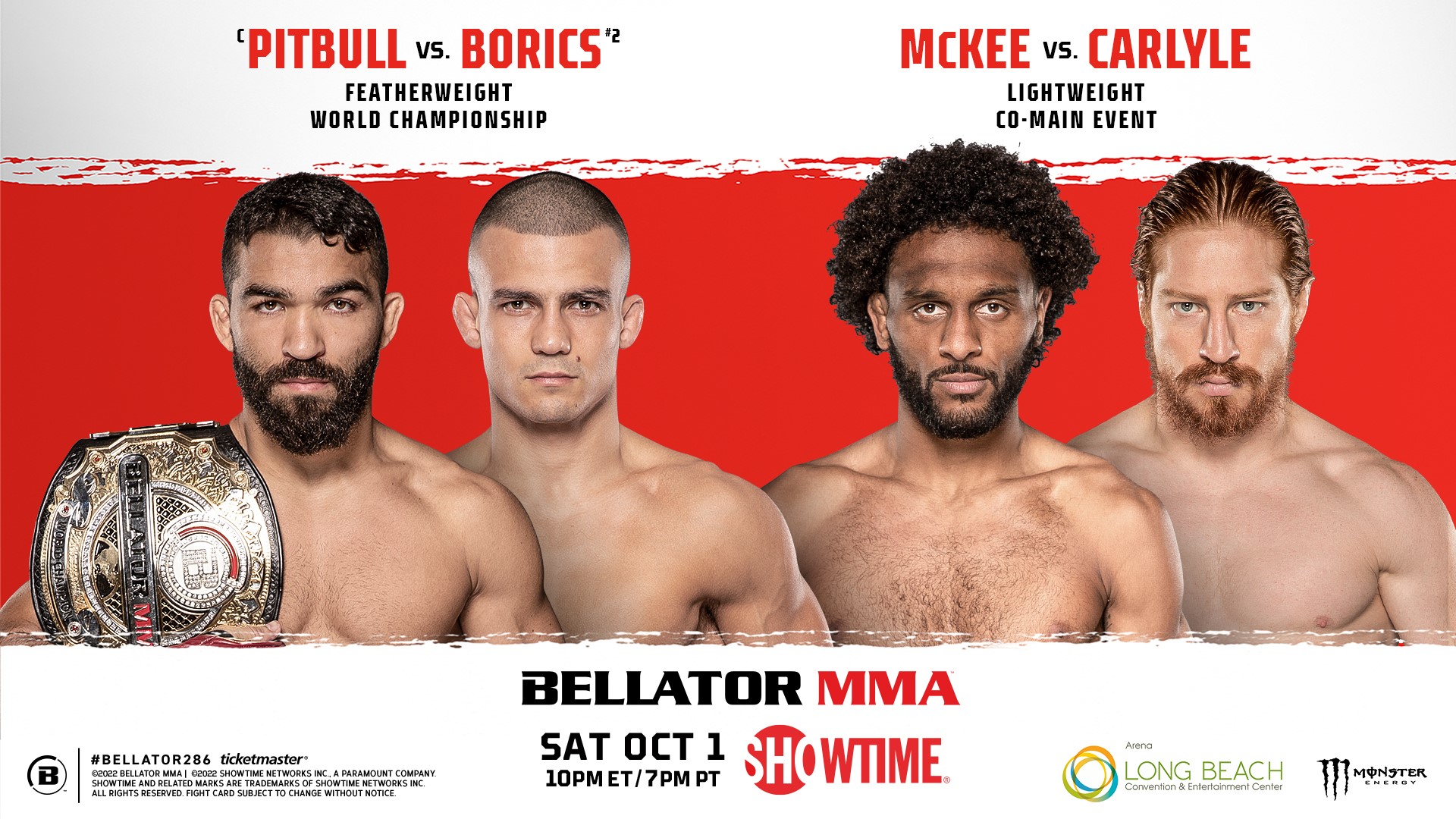 Plus, LBC’s own AJ McKee makes his lightweight debut, as the former 145-pound champion takes on San Diego’s Spike Carlyle in the co-main event.

QUOTES FROM TODAY’S MEDIA DAY
PATRICIO PITBULL
“My brother (Lightweight Champion Patricky Pitbull) surprised me – it was amazing. I didn’t know that he was going to make it here. He’s with me for all my fights; when he comes, it’s completely different. That means a lot to me. The power we have together, it’s unbelievable. Pitbull is going to defend… Everybody knows when I fight, it’s going to be an exciting fight.”

“He’s a talented guy. He is the guy in this division with the most victories. Maybe it’s going to look like a kickboxing match. I’m going to try to take him down if I have the opportunity. If I don’t have that, I’m going to strike with him. Nobody can escape from me from there.”

“The most important thing for me is to get the victory Saturday night and keep the belt with the Pitbull brothers. Lightweight and featherweight.”

ADAM BORICS
“I have to just be myself. If I am myself, I’m the best in the world. I definitely respect him. He’s a legend, so I really respect him. [I’ve been preparing for this fight for] five years; that’s a long time.”

“I think my fight IQ is very big, so I will definitely use that. I already show it; I already know how to beat a champion, because I already beat a former champion. I will use that.”

“We all change, always. In my last fight, I had two takedowns; before that, I never did takedowns. My side is different because I’m still 29 and I just get better every day. He’s 35, but he’s changed a lot. In the beginning of his career, he was more wild, more active. But right now, he fights smarter.”

“This is going to be the Fight of the Night, so everybody should watch this fight. We’re going to steal the show. You will see on Saturday night.”

AJ McKEE JR.
“It’s going to be a fight, you know. I’m looking forward to showing these big boys what’s up… I’ve already been a knockout artist at 145lbs. A knockout and a submission artist. I’m stronger, bigger, the same speed. When I hit him, he’s gonna realize ‘Oh, alright, he is strong.’ I think he’s going to go into wrestler-mode.”

“I expect him to bring a fight. I expect both of us to go in there and put on a great show. The respect’s there, but when that door closes, all the respect goes out the window, and we both know that… It’s the reincarnation. I’m coming back from the dead, Undertaker-style.”

“I would say it’s just, having all your friends and family there, the motivation is there. You’ve got to go there, show up, and show out. That’s the big key. Actually having it in the city, it’s about to be insane. I can’t wait. The energy… Having everyone literally just in the city here for me, it’s going to be crazy… it gives you energy, but sometimes it’s not good energy. You’ve got to know when to have that switch on and off; you don’t want to run into something. It’s fighting hard, fighting smart, and waiting for the right opportunity to take him out.”

“I’m always chasing belts. Losing one title, gaining another. To be the champion, you must beat the champion. Patricky is not the real champ, he’s an interim champ, so I’m looking forward to giving him his first real matchup as the champ. Patricky, Patricio, it don’t matter to me: a Pitbull’s and Pitbull, and I’m just trying to walk the dog.”

SPIKE CARLYLE
“At 155, I’ve never lost a professional fight. I have that in my back pocket. As far as AJ and what he’s going to experience, it’s a big jump. I don’t think he’s allowed his body enough time to adjust. I think there’s going to be a significant size, strength, every type of advantage.”

“If I punch him, he’ll die. If I take him down, he’ll be crushed. No matter what, whatever I choose to do, it’s going to be something he hasn’t had the chance to prepare for. I don’t need three rounds.”

“Controlled chaos is my style, so I’m a wild man. How does he prepare for me? That’s the real question. I already know how to prepare for myself, so I think it will be no problem… I’m always there. That’s the heart of the champion.”

“I’ve had 17 professional MMA fights. 14 amateur fights. I’ve never been finished. Out of my 14 professional victories, I have 13 of them by finish. 6 submissions, 7 knockouts. I mean, this is must-see TV. This is going to be an amazing fight. I can’t remember the last fight I was in that wasn’t entertaining.”

“I’m coming for that belt. Whoever has the belt, that’s what I desire.”

JUAN ARCHULETA
“Both of us, we’re super competitive. We fight for each position, whether it be on the floor, on the feet, on the cage. This is an action-packed fight waiting to happen… It makes me want to come forward, too. Like, bring it. Let’s go. Let’s go toe-to-toe. Let’s f*ing throw down… People already know this is going to be one of the top fights of the night. If you love MMA, this is the reason why you’re tuning in.”

“We’re going to go out there and make mayhem happen. Wins and losses take care of themselves. There’s nothing you can do with that. The only thing athletes really strive for is performance. Every time you go out there, you fight with your heart and give the best performance you can, that’s what fans appreciate and what fans want to tune in and watch.”

“Third round, he’s going out. Mark my words. He’s going to go out third round.”

“Once I finish Barzola, Sergio has to come out before this tournament’s over, and there’s going to be nobody for him to fight other than me. Otherwise, we go up and we go out to Dublin in February and fight Pedro Carvalho.