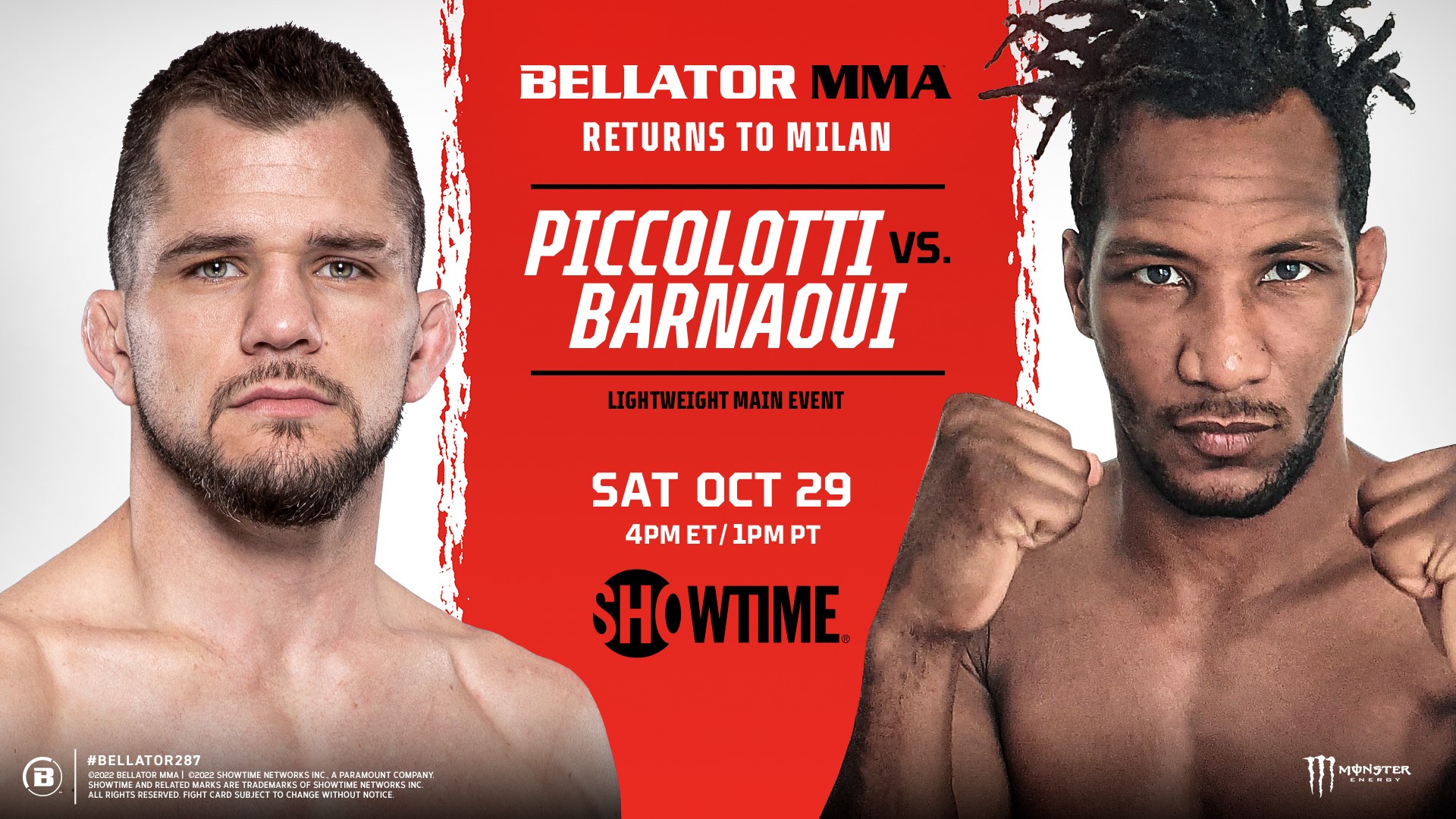 Saturday’s main card also includes a clash between two British lightweights in Saul Rogers (15-4) and Tim Wilde (14-4-1) and a featherweight bout between No. 8-ranked Justin Gonzales (13-1) and Andrew Fisher (19-8-1).

Here is what the BELLATOR 287 fighters had to say:

ADAM PICCOLOTTI
“I’m just excited. I know it’s the main event, but I’m out here in Milan, Italy. It feels great. It’s my first time fighting in Europe, and I was beyond excited. I was stoked.”

“Those splits were BS, everyone knows it. Every fight’s very important. I’m going to go out there and do everything I can to get my hand raised.”

“I love it [being booked against BELLATOR newcomers Tofiq Musayev and now Mansour Barnaoui]. You know, it shows they have some confidence in me to represent BELLATOR’s competition proudly.”

“2021 was tough. I had a lot of things happen to me with injuries and things outside of my control, and I had to take some time off. I’m happy to get two fights in this year, and the fact that I’m fighting the main event in Italy, it’s the cherry on top.”

“I really would like to be inside the [upcoming BELLATOR Lightweight World Grand Prix] tournament. I’m going to take it step-by-step with Piccolotti and then we will see about the tournament. For all the fighters in my weight category, be there and wait, because I’m here, and I’m coming.”

“I trained a lot in Paris. I know my opponent, I know he’s very good on the ground. All the training was specific for my next opponent. I’m training all the time. It’s been three years and I can’t wait to get into the cage and show what I can do.”

“I’m absolutely sure that if I can fight in Paris next time with BELLATOR, I will bring a lot of fans.”

“He’s on a win streak, right? It’s the same again. People are going to say what they’re going to see, but Charlie’s on a win streak; I’m going to go out there and snap that win streak. I’m in this for a world title. Charlie’s dangerous; he’s put a few people out, so I can’t take him lightly. But that said, I just feel like I’m a level above him… I was happy with the plan given out to me, so now, I just need to go out there and execute that plan.”

“It’s important, but like my coach said, don’t look for it. I’m not going to finish everyone in the division, so I don’t need to force it. I need to be a smart fighter, not go out there and force it… I think there’s more aggression but smart aggression. I’m going to go in there and not force anything and pick my shots.”

“It felt amazing [to see Leon Edwards capture a world title]. You can’t really put it into words. It confirmed to me and everyone else that we’re doing something right. That confirmed to me to believe in the team, to keep grinding, and to trust the process… The energy’s crazy. Everyone’s just trying to build on it and end the year with some more wins for me and the team.”

“It would be crazy [to hold a world title alongside my brother] because it would make history. You can’t rewrite history. Like I said, my brother’s gotten the job done. It’s up to me now to get the job done.”

“It’s massive to me. There’s a lot of guys on the card that have been doing this longer than me, so for me to come in and make a splash, I love the support.”

“I like the Mousasi matchup. I think that’s a fight the fans would love. I would like to entertain that, but we will see after Saturday.”

JUSTIN GONZALES
“I took that loss [to Aaron Pico] very personally. I didn’t join this game to lose. I came here to be a champion. We took our first ‘L,’ but I don’t think we’re too far off. Same coaches, same guys; the guys that have my back. We’re always growing in this game. Not too much has changed, just some small differences in our game.”

“I never overlook a man. I’ve got to handle business. Andrew Fisher is the fish to fry. This is the last fight on my contract, so we’ll talk money, and we’ll talk fights. After this, I plan on jumping right back up the rankings and taking on the world.”

“There’s no better time than now. Every time I step inside the cage is an opportunity to make a statement. Everyone in the rankings is on my hit list.”

SAUL ROGERS
“When I first joined BELLATOR, I felt like I wasn’t living up to my true potential. I feel like as time’s gone on, I’ve developed my game and my confidence. I think confidence is one of the main factors.”

“When they offered me the fight I was excited for this one. I know he is going to come wild and I’m going to come wild. He’s going to bring it, and I’m 100% going to bring it… I’m not looking too far past this, but that would be nice. To put him away Saturday night and secure a place in the tournament. To me, it is what it is. I’m trying to put guys away and if I get a spot, I get a spot.”

“I feel like every fight’s a difficult fight. I’ve thought fights were going to be hard and they were really easy, so I don’t know. Tim’s really tough; he’s there from the start of the bell to the last bell. As tough as he is, as good as he is, I see myself stopping him… I don’t listen to the betting odds. I’m definitely not looking past him. I respect him as an opponent but I am very confident in my skill set.”

DAVY GALLON
“I feel like I’m getting better with each fight. I try to elevate my game. I try in the training camp, and I will on Saturday try to be the Fight of the Night… After each fight, I take it back to my game. Against Scatizzi, I will try to be a more complete fighter. For the outcome of the fight, I think this will be a victory. I think we’re going to bring everything in the game, and if I could get a knockout in the second round, I think that would be good.”

“That’s why I train a lot in every part of the game. As an MMA fighter, that’s the feeling I try to have in the fight. If you take me down, no problem. And if I want to stand up, I will stand up. That’s the thing I think every MMA fighter should have in the cage… I train a lot in this training camp. I try to push the limit to be as ready as I can. Like I said, I worked on my striking, I worked on my ground game. I don’t want to get to the judges, if I can end the fight before the end of the third round, I will put everything on the line.”

“A lot of people ask me this question: is it a problem for you to take on a guy in his hometown? I say no, because every time I feel this energy in the cage, I hear boos, it’s more like a game. My job is to win the fight, but it’s also to entertain people, and even if you are the bad guy, the crowd starts to cheer for you. I love this energy. I love to be part of this experience and fight in the hometown of my opponent. I love traveling all over the world. Every time it’s a chance for me, I travel everywhere I can in the world. I am blessed by BELLATOR for this opportunity.”

LUKE TRAINER
“I’ve changed a lot. I’ve completely changed teams. I’ve hired a new boxing coach to sharpen my hands; I’ve gone to a lot of great grappling schools. As far as the mental side to my sport, I do a lot more visualization. I think I needed the loss so I could learn where the holes were in my game. It’s worked out in my favor, and hopefully, it pays off.”

“Brad Pickett and the head coaches over there, the environment is crazy. The way the gym’s run is great. It kind of ran its course; it was time to move on and change my training a little bit and adapt. I’m surrounded by killers and professional savages, and it’s made me a better fighter already. You’re going to see the results on Saturday. I’m a different animal now.”

“I’ve fallen back in love with my grappling. I’ve been to jiu jitsu gym after jiu jitsu gym. I’m ready wherever it goes. I’m confident I’ll put this man away. This is the most violent I’ve ever felt.”

“I’ve watched literally every fight I could physically find. I was watching three of his last fights on the plane here. Every day I study him. There’s a picture of him in my car; I’ve fully immersed myself with Lucas Alsina. I think I know his strengths and weaknesses. I think I’m going to put him away, but I believe I’ve got the tools and weapons to put away this man.”