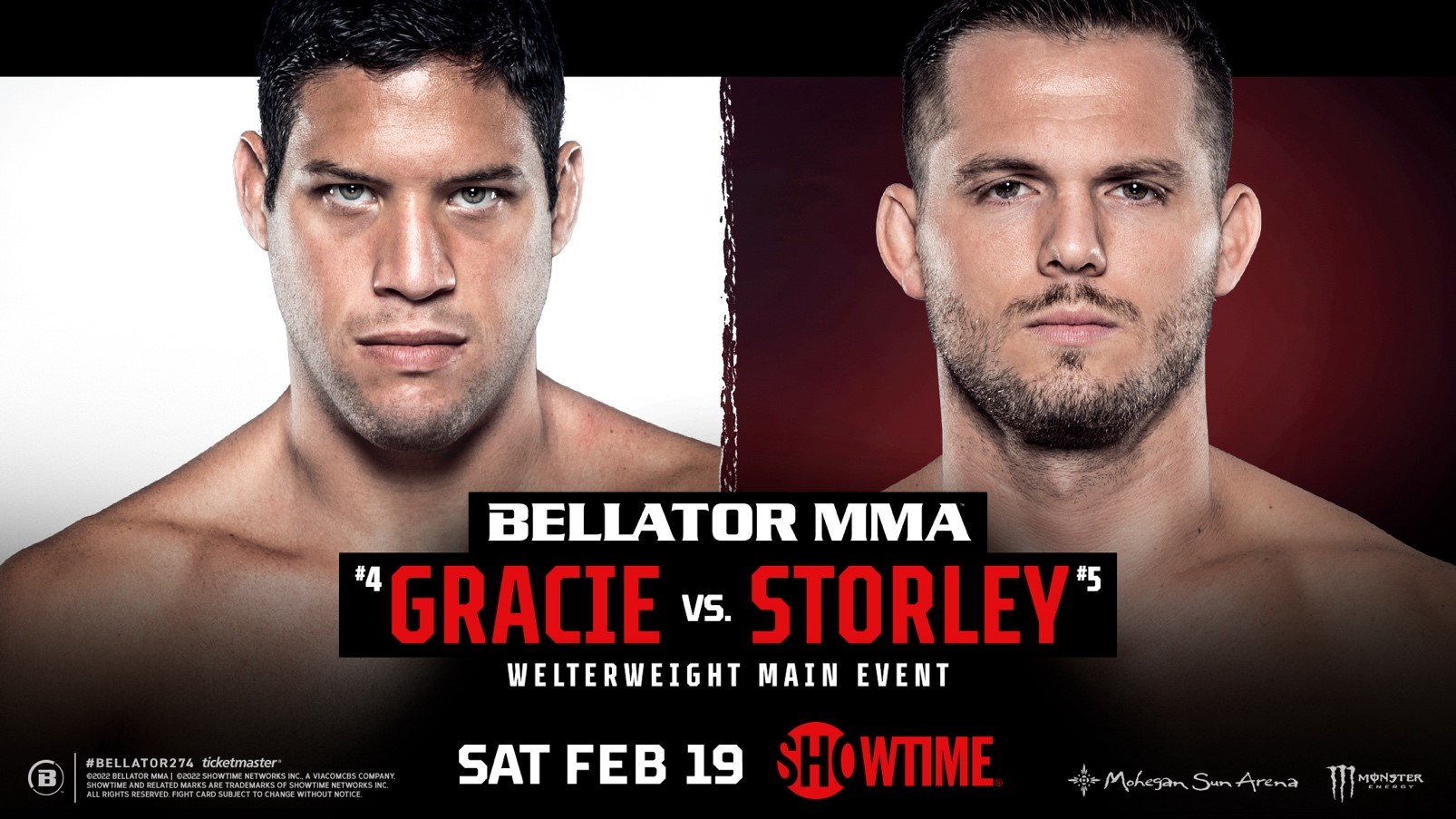 UNCASVILLE, Conn. (Feb. 17, 2022) – No. 4-ranked Neiman Gracie (11-2) will lace up the BELLATOR gloves for the 12th consecutive time when he takes on former four-time collegiate All-American wrestler and No. 5-ranked Logan Storley (12-1) to headline BELLATOR MMA 274: Gracie vs. Storley. The clash of top-10 welterweights takes place on Saturday, Feb. 19, at the Mohegan Sun Arena in Uncasville, Conn.

In the co-featured bout, former BELLATOR Welterweight Champion and No. 9-ranked Andrey Koreshkov (24-4) will return to action and open his 2002 campaign against Alliance MMA product and owner of seven first-round finishes Chance Rencountre (16-4) of Pawhuska, Okla. The main card also will feature a pair of returning BELLATOR MMA top-10 heavyweights as undefeated Jackson Wink product and No. 8-ranked Davion Franklin (4-0) squares off against three-time BELLATOR MMA veteran, American Top Team standout, and No. 9-ranked Said Sowma (8-2).

In preliminary action, Brennan Ward (14-6) will make his long-awaited return to the BELLATOR MMA cage following a nearly five-year layoff in a 175-pound contract weight bout against kingly Kentuckian Brandon Bell (10-10). Also, undefeated southpaw and Team Body Shop submission ace Jaylon Bates (4-0), of Portland, Ore., will make his fifth consecutive BELLATOR appearance when he takes on Albany, N.Y.’s own Chris Disonell (6-4), who will return to the promotion for the first time since August 2019. Moreover, a scintillating skirmish of once-beaten lightweights will pit fighters with two of the sport’s greatest nicknames as Mandel “Rat Garbage” Nallo (8-1, 1 NC) hopes to send Nick “Nyquil” Browne (12-1) into a glorious slumber.

Tickets for BELLATOR MMA 274: Gracie vs. Storley are on sale now at both Ticketmaster.com and Bellator.com.

Here is what the fighters had to say on Thursday, Feb. 17:

“It’s hard to say whether this is going to go to the fourth and fifth round. He’s a tough fighter. We never know. But I’m glad that we have more time because I’m a Gracie. I like to fight longer fights. Even no time limit if they let me.

“I’m very comfortable. This is one of the best training camps I’ve had. I’m very confident that I will win this fight. It’s hard to predict how, but I’m sure this fight is not going to go to the decision. I’ve prepared to face him anywhere. Wherever the fight goes, I’m ready.”

“I’ve trained with the best guys in the world. The likes of Gilbert Burns for the last five years. So I’m ready. But at the same time, I know he’s very good on the ground. The family name. But I’m prepared and I’m ready to do what I have to do.

“You go out there and get a dominant performance, I would hope that puts you in line for the next title shot. But for me, the biggest thing is taking care of Saturday night.

“For me, it doesn’t matter that my opponent changed. They are the same height, same reach, same stance. Southpaw. A little bit of the same style. Almost nothing changed.

“If I win against Chance, I want to fight a top guy. Somebody who is above me in the rankings. And after the next win, maybe I can fight for the title.

“Amasov vs. Page is a very interesting fight because Michael “Venom” Page has outstanding skills. He’s very uncomfortable for any fighter. Amasov has good wrestling. I think if he finds his distance and can take down “Venom” Page, he’ll win this fight. If he can’t find the distance, he has a big problem.”

“I’m looking to go in there and do my thing. The same as always. Nothing has changed. I’m fighting my fight.

“I think if I go out there and have the performance that I know I’m capable of, nobody is going to keep discrediting me and telling me I’m fighting bums. I’m not going to get these kinds of DM’s anymore. I think this is the fight to shut up all the critics. Shut up all the haters. And I’m going to do it.”

“I was a little bit surprised I didn’t get a more established name. Franklin is a new up-and-coming prospect. Pretty powerful guy. Fast starter. I was hoping I would get someone more experienced or higher up in the rankings. But I guess he is above me, so he’s next on the list.

“I see this being a fast start and maybe a faster finish.

“I haven’t seen Franklin on the ground. I know he wrestled but I don’t know how long he’s been doing jiujitsu. I think he’s pretty new in the MMA world and jiujitsu experience comes a long way. I’ve been doing it for ten years so if it does go to the ground, I definitely have the advantage there.”

“It’s good to be back. It was a long road back. I struggled a lot. It was tough. It was a long four years away from the cage and I’m happy to be back at Mohegan Sun. I’m real proud to make my comeback at Mohegan Sun and put on a show for the fans and show everyone where I’ve been. I worked real hard to get back here. I’m going to put on a good show.

“I’ve watched some video on Bell. He’s a little muscle ball. He looks like he’s a strong dude. He looks like he’s pretty explosive but nothing that I haven’t seen before. I’ve fought some of the best dudes in the world. But I respect him as an opponent. I take everybody seriously. I don’t think that he can hang with me at any facet of the game. I guarantee you I’m in better shape than him. I’m probably just as strong, if not stronger. I can wrestle and I can swing. I’m going to bring you into a dog fight. That’s all I know how to do. That’s all I want to do. I don’t want to fight any other way.”

“I do like the matchup this weekend. Make a statement or not. I might just take him down and submit him. I don’t know. It depends on how I feel when I get in there. But we’re going to come out with a ‘dub’ that’s for sure. And he’s not making it all three.

“I actually want four fights this year. I like to fight. I’m willing to even keep my pay the same to fight more. I just want to fight more. Get the constant experience of being in the cage, being around the BELLATOR team, being in the hotels, managing the weight, cutting the weight. I would like to fight more consistent. Every two or three months would be perfect. If I can get four in this year from BELLATOR, that would be a blessing but if not, I’m not complaining either. They’re doing a hell of a job with me.”