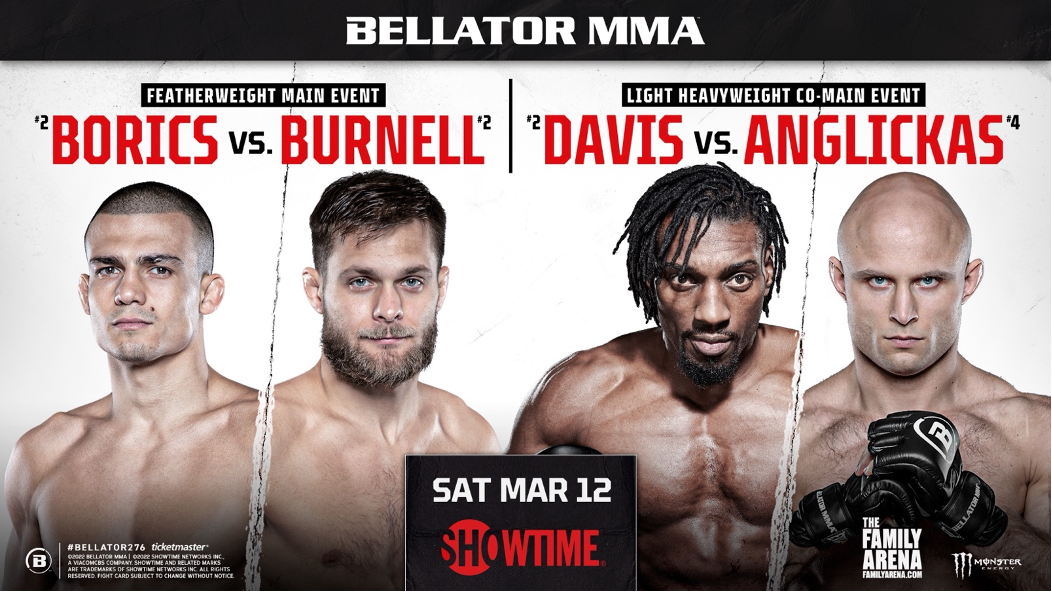 ST. LOUIS (Thursday, March 10) – Fighters from BELLATOR 276: Borics vs. Burnell spoke to the media today in advance of BELLATOR’s electrifying fight night on Saturday, March 12 at The Family Arena in St. Louis. In the main event, No. 2-ranked Adam Borics (17-1) meets a man also ranked No. 2 in the Official BELLATOR Rankings, Mads Burnell (16-3) for a future shot at the BELLATOR Featherweight World Championship.

In an equally exciting co-main event, former BELLATOR Light Heavyweight Champion and No. 2-ranked Phil Davis (23-6) will return to action and open his 2022 campaign against No. 4-ranked Julius Anglickas (10-2), who most recently challenged for the 205-pound title.

BELLATOR 276 sports a four-fight main card, including a featherweight feature between Gadzhi Rabadanov (16-4-1) and Jay-Jay Wilson (8-0), as well as a middleweight fight between Johnny Eblen (10-0) versus John Salter (18-5).

Tickets for BELLATOR MMA 276: Borics vs. Burnell are on sale at both Ticketmaster.com and Bellator.com.

Here is what the fighters had to say today during their pre-fight virtual media availability:

“Always my upcoming fight is the most important fight of my life. Nothing changes for me.”

“I think this is great timing for me. It’s a great process for me. I don’t think I’ll fight five rounds, but I’ve prepared for five rounds. For me, this is the title fight. This is the mentality I have.”

“I’ve improved a lot. I still haven’t shown all of my skillsets in my fights. I know that I’m one of the best in the world at 145 pounds and I’m ready.”

“I really don’t care who I get after this. Pitbull is a legend. AJ McKee is a star now. I would fight both of them.”

“I don’t feel any extra pressure. I love fighting and I just want to go out there and fight.”

“I always wanted to put Hungary on the map of MMA and I think I’ve done that. I’m very proud to be the biggest fighter in Hungary. My main reason for fighting is to make my country proud.”

“I’ve been feeling the same as any other fight. They always say the next fight is your most important fight. But this fight week I’ve been feeling fresher than ever. It just seems everything is coming together.”

“A fight is a fight. I always prepare for a tough match and come in there trying to be my best every time.”

“It’s nice getting a push and feeling like the organization have belief in my skills.”

“I have some goals in my life. One of them is to become Bellator world champion, another one is to headline Bellator Copenhagen. I really think it would make sense for Bellator to go to Denmark and it’s my dream to main event that card.”

“For me, pressure is a privilege. I like it. So many people dream about being in the position I’m in right now. Yes, there’s some pressure with that, but it’s all good. It’s part of the game.”

“Julius is a tough fighter. He swings for the fences. He’s one of those guys who is ready to make a nice title run.”

“He’s overall good at everything, he doesn’t have any holes in his game. When I get hold of a guy like that, it’s a game time feel. I just have to figure out where I can exploit any weaknesses.”

“My job is very simple. Show up Saturday, beat somebody up and get my hand raised.”

“Phil is a great fighter. He’s good, I’m good and anything can happen. I’m happy to have this opportunity and to redeem myself a little bit. I’m happy to be able to fix the mistakes from my last fight.”

“I think he fights harder than Nemkov and his fighting style is a little bit different. He’s good everywhere and I’ll have to get ready for that. I’m excited.”

“I feel like I’m alert and on my ‘A’ game and that’s going to make me fight better.”

“This is definitely big. I didn’t expect Bellator to offer me Phil Davis. It was definitely a surprise, I thought they would give me someone lower ranking. But that’s okay, I think it’s a good sign and that it means they like me. They keep giving me great shots, great opportunities, and I’m glad to have them.”

“I’m taking this fight as just another fight. I know it’s one of the top guys in the world, but I’ve had so much stress trying to work my way up to a title fight. This is the least stressed I’ve felt during a camp for a long time.”

“He’s one of those guys that brings problems everywhere. Good wrestler, obviously. I guy that’s that good a wrestler is going to be good on top. But he hasn’t been in there with the toughest opponents. I don’t think he’s really had that moment of, ‘What’s happening?’ and that’s a game changer. The fact I’ve had that so many times I know I can push through those moments.”

“I don’t have any animosity towards him. I think he’s a good fighter and we’re going to put on a good fight. That’s what it’s all about.”

“I think with us both being good college wrestlers we’ll end up in some wrestling exchanges. At some point he’ll be trying to take me down and it’s just something I’ll have to be prepared for.”

“I’m pretty excited for any time I can showcase my skills in the cage. I’m just happy to have a job, to be able to fight and to put on an entertaining show for the fans.”

“He’s definitely the toughest competitor to date. But I’ve been preparing for this moment my whole career and I’m ready to show up.”

“I’m up for any potential, I don’t really care. I work my ass off in the room and I get tested in the room day in and day out. I’m prepared for that moment if it comes.”

“There’s no animosity, I don’t hate the guy. I saw him when we were doing COVID testing and shook his hand.”

“I’m pretty damn excited about this fight. It’s in St. Louis, my home state, and my family are going to be able to make it. It’s going to be a lot of fun – I can’t wait to show up.”

“He’s a good grappler. I expect him to come out and try to use his wrestling. He’s got a good background having trained with Khabib. If we end up in a grapple, that’s where I’m most comfortable anyway.”

“I’m going to be a little bit faster than these guys. They’re definitely a little bit stronger, these guys are walking around a lot bigger than me. But most of my training partners are light heavyweights or middleweights, so the strength doesn’t scare me. I’m excited to be competing at this weight.”

“I feel like fighting is more of a mental game and I feel like I have a mental edge against all these opponents.”

“To be honest I don’t really mind where this fight goes. I’ve seen his striking and I’m not that impressed. I’m happy to strike with him. I’m not really looking for a specific position, I’m just going to go out there and do my thing.”

“I’m happy to be back and excited to put on a show for everyone. It’s a case of get here, eyes on the fight, get it done and go home.”

“I’m sure that he’s on the same trajectory as I am, nobody likes losing. I’m not doing a lot of looking at him, or other opponents. I’m focusing on my own game. Hopefully he’s ready for me.”

“It doesn’t matter who, I’m ready to fight them and put little fisticuffs on them.”

“I don’t watch a lot of opponent’s game plans. If he comes to the fight with something a little different, then that won’t affect me.”

“I’ve said it from the beginning, but I’m just here to have fun. I still find it crazy that Bellator are paying me money to punch guys in the face.”

“I put pressure on myself. I expect the best from myself, and I will deliver.”

“When it comes to stepping in the cage, I let it all go. I leave it all out there.”

“I’m going to go out there, show them I’m more than capable of stepping up and that tomorrow’s just another day.”

“There’s always pressure but it’s pressure from myself. I’m here to put on shows; put on shows that when people watch they want to watch more. I live for the challenge and enjoy what I do.”