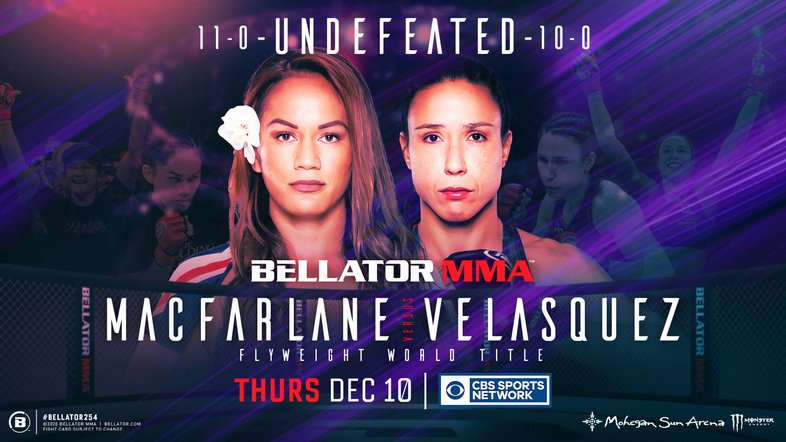 CBS Sports Network will air Bellator 254: Macfarlane vs. Velasquez LIVE in all U.S. markets, while preliminary matchups will stream on CBSSports.com and Bellator MMA’s YouTube channel. Additional bouts will be announced at a later date.

Returning to the Bellator cage for the first time since a victory over Kate Jackson in her hometown of Honolulu last December, Macfarlane will look to continue her dominance over Bellator’s elite woman’s flyweight division as she defends her title against Julianna Velasquez on December 10. The inaugural Bellator flyweight champion, Macfarlane enters the contest with a perfect professional record of 11-0, including eight coming by way of stoppage. Adding to her impressive resume, “The Ilimanator” has the most victories amongst women in the Bellator cage (10) and has no plans of slowing down, as she seeks to add to her legacy inside the cage with her fifth successful title defense at Bellator 254.

With a professional record of 10-0, Rio de Janeiro’s Juliana Velasquez looks to remain perfect in her first chance at Bellator gold. The black belt judoka will attempt to become the second women’s flyweight champion in Bellator history when she looks to extend her promotional winning streak to six. With prior stoppage wins over Rebecca Ruth and Kristina Williams, Velasquez also defeated former 125-pound title challenger Alejandra Lara en route to her upcoming title shot. Much like Macfarlane, the 34-year-old Team Nogueira-product will be competing for the first time in 2020, nearly a year removed from her Bellator 236 unanimous decision victory over Bruna Ellen.