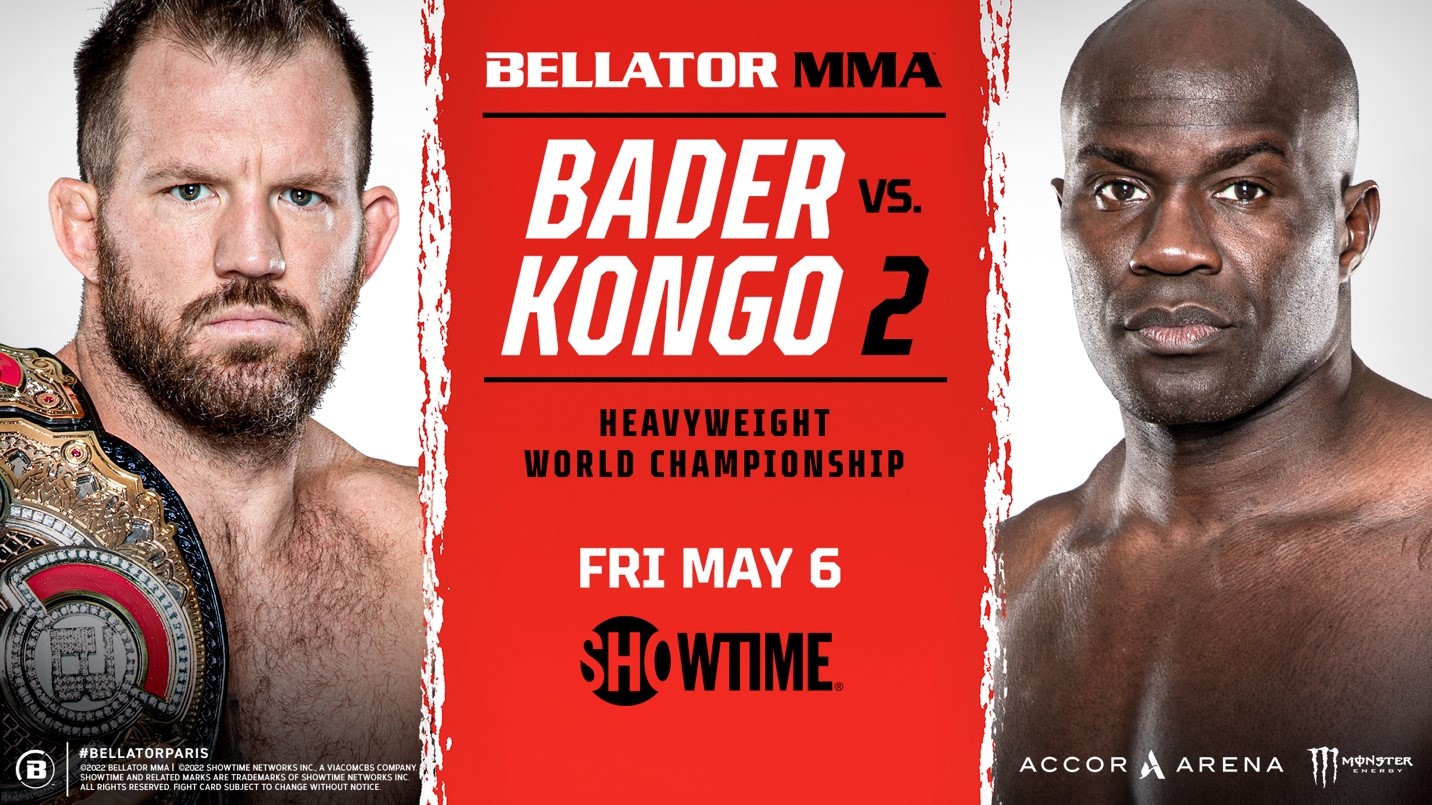 PARIS, FRANCE January 29, 2022) – Fresh off unifying the BELLATOR MMA Heavyweight Championship, Ryan Bader (29-7, 1 NC) will defend his crown in enemy territory against hometown favorite and No. 2-ranked heavyweight Cheick Kongo (31-11-2, 1 NC) on Friday, May 6. Paris’ Accor Arena is set to play host to the world title fight, which will headline the BELLATOR PARIS: Bader vs. Kongo event.

Tickets for BELLATOR PARIS: Bader vs. Kongo 2 are on sale now at accorarena.com and bellator.fr.

Broadcast details and additional fights, including a plethora of French talent, are set to be announced in the coming weeks. Follow Bellator France on Instagram @BellatorFrance and on Facebook at www.facebook.com/BellatorFrance/.

With mixed martial arts becoming legalized in France in 2020, BELLATOR became the first promotion to hold a major MMA event with BELLATOR 248 in October of that year. The success of that historic card propelled BELLATOR to make a return to “The City of Lights.”

“Bringing BELLATOR to France in 2020 was one of the highlights of my career, and I knew that it was the start of a long run of big events in Paris,” BELLATOR President Scott Coker said. “Here we are ready for our second trip to France and this time we are bringing a heavyweight world title rematch featuring arguably the most recognizable French mixed martial artist in our sports history. It’s personally important to me to help grow the sport in France and give these athletes a chance to perform on a large stage.”

The main event is a rematch from BELLATOR 226 in 2019 that ended in a controversial no-contest following a disputed eye poke, creating heightened tension between the two fight camps that will surely boil over on May 6.

Successfully returning to the 265-pound division following an impressive run in the BELLATOR Light Heavyweight World Grand Prix, Ryan Bader (29-7) is fresh off a dominant BELLATOR MMA World Heavyweight Title defense over interim champion Valentin Moldavsky in front of a partisan Phoenix crowd on Jan. 29. A former two-division champion, Bader has defeated nine of his last 12 opponents at both heavyweight and light heavyweight. Fighting out of Chandler, Ariz., the former two-time NCAA Division I All-American wrestler from Arizona State University opened his professional career by winning season eight of “The Ultimate Fighter.” Never one to shy away from an opponent, Bader has had nothing but high-profile bouts since signing with BELLATOR MMA in 2017, defeating Fedor Emelianenko, King Mo, Matt Mitrione, Linton Vassell, Lyoto Machida, and Phil Davis. In his initial 265-pound title defense against Kongo, Bader controlled the action before referee Mike Beltran stopped the contest due to an accidental poke to Kongo’s left eye at 3:52 of the opening round.

Snatching victory from the jaws of defeat at BELLATOR MMA 265, longtime BELLATOR veteran Cheick Kongo (31-11-2, 1 NC) was on the verge of being stopped by Sergei Kharitonov in the initial stanza during his last outing on Aug. 20, 2021. After hitting the canvas and becoming badly hurt, the exhausted Parisian rallied to secure a tap out via rear-naked choke with one second remaining in round two. Ten months prior to the dramatic triumph, the former UFC standout headlined the first major MMA event in his native France as he took on Tim Johnson in a rematch on Oct. 10, 2020. Since signing with the Scott Coker-led company in late August 2013, the promotional mainstay, who currently sports a 13-3 promotional record with one no contest, holds the records for most fights (17) and wins (12) in BELLATOR heavyweight history. Just three years shy of 50, Kongo has proven that age is just a number as he continues to challenge the best that BELLATOR MMA has to offer.