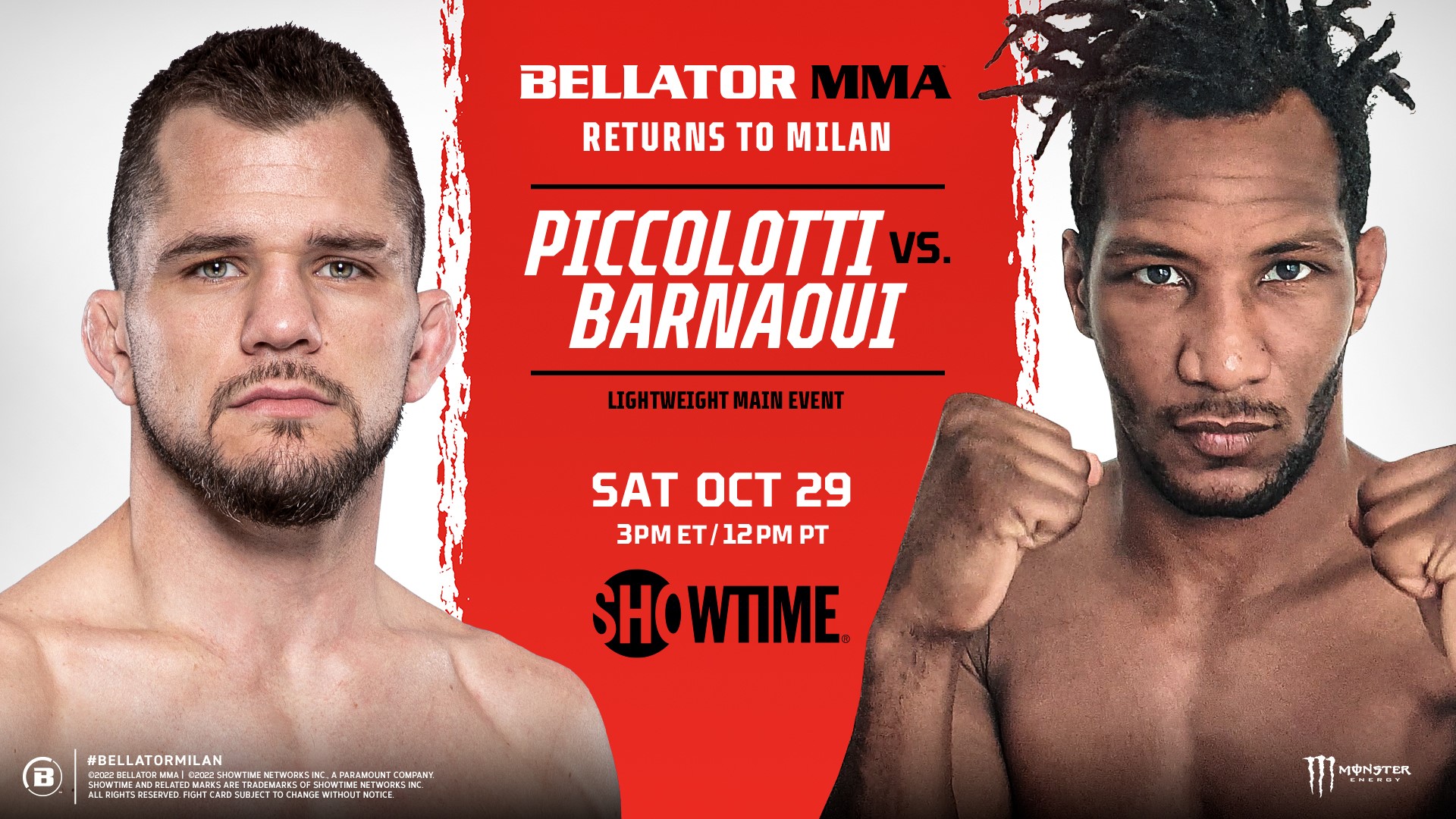 LOS ANGELES (August 10, 2022) – BELLATOR MMA has today announced the lineup for its return to the Allianz Cloud Arena in Milan, Italy on Saturday, October 29 for BELLATOR 287: Piccolotti vs. Barnaoui. The international spectacle will be headlined by a lightweight contest featuring Northern California’s Adam Piccolotti (13-4) making his 14th appearance for BELLATOR against the newly signed French superstar Mansour Barnaoui (19-4), who will be looking to make an immediate impact with the brand.

The co-headliner will see No. 3-ranked middleweight Fabian Edwards (10-2) going up against the always tough and exciting “Relentless” Charlie Ward (10-4), who proudly represents Ireland. Rounding out the BELLATOR 287 main card will be a 155-pound tilt between a pair of British veterans in Saul Rogers (15-4) and Tim Wilde (14-4-1), while No. 8-ranked featherweight Justin Gonzales (13-1) puts his top-ten ranking on the line against England’s Andrew Fisher (19-8-1).

BELLATOR 287: Piccolotti vs. Barnaoui will air live in the US on SHOWTIME at 9 p.m. CEST/3 p.m. ET, while fans in the UK can tune into the main card on BBC Three and BBC iPlayer. The preliminary portion of the event can be seen via the BELLATOR MMA YouTube channel, SHOWTIME Sports YouTube channel, Pluto TV (US), BBC iPlayer (UK), Virgin Media Two & Virgin Media Sport (IRELAND), with the first fight of the evening kicking off at 5:30 p.m. CEST/11:30 a.m. ET.

Tickets for the event are on sale now and can be purchased online at Bellator.com and Bellator.it.

Looking to spoil his opponent’s BELLATOR arrival is Adam Piccolotti. “The Bomb” out of Northern California is no stranger to taking tough fights against promotional newcomers. The Brazilian jiu-jitsu black belt trains alongside some of the world’s top fighters at the prestigious American Kickboxing Academy, and having won two of his last three, has the results to back up his quality pedigree. The 33-year-old will look to build upon the momentum he earned by defeating longtime BELLATOR veteran Georgi Karakhanyan back in February. In defeating Barnaoui in the main event of a high-profile event, Piccolotti could find himself deserving of a place in the deep 155-pound rankings.

When BELLATOR returns to Milan on October 29, a highly-touted new face in Tunisian-born Frenchman Mansour “Tarzan” Barnaoui will make his BELLATOR debut in the main event of the evening. Barnaoui, 29, earned a stellar reputation from combat sports fans by dominating competition across Europe and Asia for the past decade. The six-foot-tall lightweight amassed a blistering 95% finishing rate replete with twelve submission wins and six knockouts while capturing the ROAD FC, M-1 Challenge, and BAMMA titles along the way. “Fans can be expecting that a true warrior is coming to BELLATOR, and I am motivated to win all my matches in impressive style,” said Barnaoui upon signing with the promotion. “My style is hard-hitting and tight submissions. I am a finisher: that’s my style.” He joins a talent-stacked lightweight division in BELLATOR on the strength of seven straight victories, but he faces a stiff test in his first promotional outing in the form of grizzled veteran Piccolotti.

Fresh off of a devastating knockout victory over the legendary Lyoto Machida, #3-ranked middleweight contender Fabian Edwards will be eager to continue his ascent up the 185-pound rankings when he faces Charlie Ward on October 29. The 29-year-old Englishman righted the ship by becoming the first BELLATOR fighter to knock out Machida, proving to any naysayers that his skillset continues to pose problems for anyone in the division. Against Ward, “The Assassin” will look to win his second straight fight and solidify his role as a major player in the 185-pound title picture.

SBG Ireland’s “Relentless” Charlie Ward has established himself as a legitimate knockout threat in BELLATOR’s 185-pound division. Now 41, the Irishman is proving age is just a number with each successive outing, notching five of his seven BELLATOR victories with emphatic knockouts. On October 29, he will look to derail the championship aspirations of one of the division’s brightest emerging stars and reclaim a top-ten ranking.

England’s Saul Rogers will look to score a second consecutive victory at BELLATOR Milan against fellow countryman Tim Wilde. Rogers’ well-rounded grappling game has seen him dispatch Aiden Lee (10-6), Arbi Mezhidov (15-5), and perennial contender Georgi Karakhanyan during his BELLATOR tenure, showing marked improvements in each successive outing. With a win over Wilde, the 32-year-old would put himself in good position to continue working his way toward the BELLATOR top-ten

Tim Wilde, 35, hopes to continue his current three-fight unbeaten streak when he enters the cage opposite Rogers in Milan. The 35-year-old Englishman hit his stride at exactly the right time notching dominant victories over Charlie Leary and Yves Landu before after fighting to a controversial majority draw against Alfie Davis in front of a hometown crowd at BELLATOR 281 in London. In doing so, he will also seek to earn the first stoppage of his BELLATOR career.

8-ranked featherweight contender Justin “J-Train” Gonzales (13-1 MMA, 2-1 BMMA) travels to Milan, Italy, in search of his second straight win inside the BELLATOR cage. The former collegiate wrestling standout has gotten off to a blistering start to his BELLATOR career, defeating top prospect Tywan Claxton (6-3) and all-action mainstay Kai Kamaka III (9-5-1). The 31-year-old former LFA champion is eager to build upon his winning momentum from the Kamaka win at April’s BELLATOR 279 with a decisive victory against England’s Fisher.

Equally flush with winning momentum is 37-year-old Andrew Fisher (19-8-1, 1 NC MMA; 2-2, 1 NC BMMA), who enters the fight with Gonzales on the strength of a six-fight unbeaten streak. Now in his second stint with BELLATOR, Fisher has impressed to the tune of two unanimous decision wins in three outings. He has already tasted victory in Milan, having outpointed countryman Ashleigh Grimshaw (20-13-1) in 2020, and he will look to replicate that success against a ranked opponent in Gonzales. Fisher spoiled the BELLATOR debut of highly-touted German prospect Attila Korkmaz (12-7) in his last outing, and now looks to extend his unbeaten stretch to seven fights.

The BELLATOR 287: Piccolotti vs. Barnaoui preliminary card is filled with intriguing talent from around the globe and will highlight several of BELLATOR’s Italian stars. Italy’s own well-regarded lightweight prospect Daniele “Scat” Scatizzi (11-6) is one of the division’s most promising young fighters. The 29-year-old from Rome now fights out of Dublin, Ireland, as part of the prestigious SBG Ireland gym. The owner of six knockouts and a submission win, “Scat” is eager to fight once again in his native country where he is 10-2 and hasn’t lost since 2015. He will square up with France’s Davy Gallon, who has been steamrolling his way through W’s since joining BELLATOR. He’s currently riding a five-fight winning streak and recently fought with home field advantage, scoring his second-straight devastating knockout at BELLATOR 280 in Paris this past May.

The charismatic Nicolò Solli has accomplished plenty at just 24 years old, but the Italian prospect is adamant that this is just the beginning of what he believes will be a legendary career. “The Monkey King” immediately made his presence in the welterweight division known in 2019, when he scored back-to-back stoppages in his first two BELLATOR appearances to move to 3-0, 1 NC as a pro. Like Scatizzi, Solli trains under John Kavanagh at SBG Ireland. He faces the very dangerous Bourama Camara (5-1) who recently dazzled his partisan Parisian crowd with an incredible KO victory during his promotional debut at BELLATOR 280.

Chiara Penco, 26, is a Brazilian jiu-jitsu purple belt out of Rendoki Dojo and has demonstrated a high degree of grappling talent inside the BELLATOR cage, notching an armbar submission and a ground-and-pound TKO among her three wins with the promotion. Having competed across Europe and beyond, Penco has amassed five submission wins in her seven professional victories. Currently, “Beasty Barbie” is riding a two-fight winning streak under the BELLATOR MMA banner including the submission over Katharina Dalisda and a BELLATOR 281 victory over Lanchana Green in May. She welcomes fellow Italiana Manuela Marconetto (3-1) to the BELLATOR strawweight fold. “The Butcher’s Daughter” is riding a wave of momentum, having recently won her third straight fight against Ireland’s Danni McCormack.