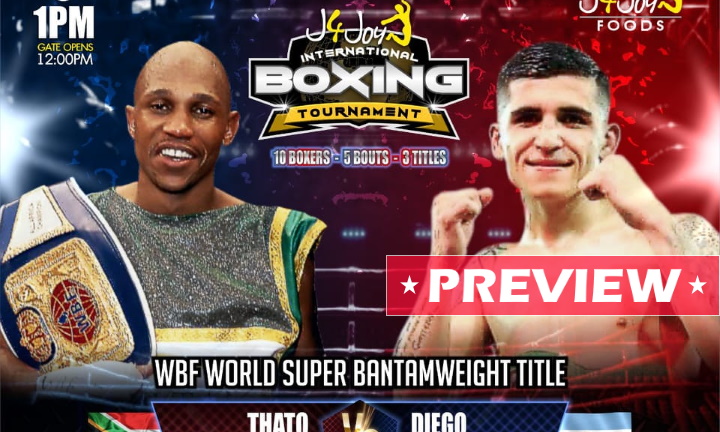 On October 9 in Gqeberha, South Africa, formerly Port Elizabeth, he will take on Argentinian co-challenger Diego Alberto Ruiz for the vacant title, in the main event of a card promoted by Joy4Joy Boxing Promotions.

Bonokoane, 13-5-3 (9), won the WBF All Africa title in 2017 and made one defense. In October of 2021 he captured the WBF Intercontinental crown, which he most recently retained last July with a highly impressive twelfth round stoppage of 17-1 Filipino Jhaleel Payao.

In former Argentina national and WBC regional titlist “El Profeta” Ruiz, 23-5-1 (12), he will face an accomplished and experienced operator, who is no stranger to taking on local favorites on their turf.

As recent as this past February Ruiz proved his worth when he fought to a draw with Scottish star Lee McGregor, the reigning European champion, so he will travel to South Africa full of confidence that he can bring the WBF world title back to his home-town Las Talitas.

Its been a career with ups and downs so far for 31-year-old Bonokoane, as the five defeats on his deceiving record shows, but on October 9 he has the opportunity make his dreams come true if he can beat perhaps the best opponent he has ever faced.