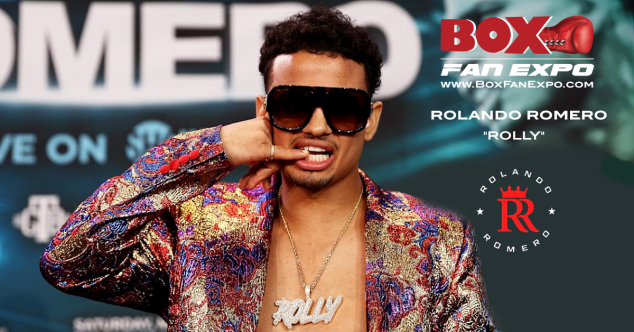 Las Vegas (August 2, 2022) – Boxing Star “Rolly” Rolando Romero has confirmed that he will appear at the Sixth Annual Box Fan Expo on Saturday, September 17, 2022, at the Las Vegas Convention Center from 10 a.m. to 5 p.m. The Expo will also coincide with the mega trilogy fight between Canelo Alvarez vs Gennady Golovkin, that will take place later that evening at the T-Mobile Arena.

Romero will hold a Meet & Greet with his fans at his booth during the fan event held over the Mexican Independence Day weekend.

The Box Fan Expo is an annual fan event that coincides with some of the sports’ legendary, classic fights in Las Vegas, including Mayweather vs. Maidana II, Mayweather vs. Berto, Canelo vs. Chavez Jr., Canelo vs. GGG II, and Canelo vs. Jacobs. Centered in boxing’s longtime home – Las Vegas – this year’s Expo is a must-do for fight fans coming in for this legendary weekend, with dozens of professional fighters, promoters, and companies involved in the boxing industry. The Expo is the largest and only Boxing Fan Expo held in the United States. http://boxfanexpo.com – @BoxFanExpo

Tickets to the Box Fan Expo are available at Eventbrite –https://bit.ly/BOXFANEXPO2022

Romero will make his second appearance at this years’ Expo and will be signing gloves, photos, personal items and also have merchandise for sale for fans to enjoy. Boxing enthusiasts will have an opportunity to also take pictures with this unique Boxing Star also known as “Rolly”.

Romero is an American professional boxer from Cuban descent who captured the vacant WBA interim title by defeating top contender Dominican Jackson Marinez on August 15, 2020. Romero known for his aggressive knockout style inside the ring and his outspoken charismatic personality outside the ring, has made Romero one of the Top stars in the boxing world. On May 28, 2022, Romero would face his biggest challenge to date against another Top Star Gervonta “Tank” Davis for the WBA “Regular” Title. This mega fight event was headlined on Showtime PPV, at the Barclays Center in New York city. The event was a huge success and although Romero did not win the title, his exciting and solid performance in this fight has made Rolando Romero a household name.