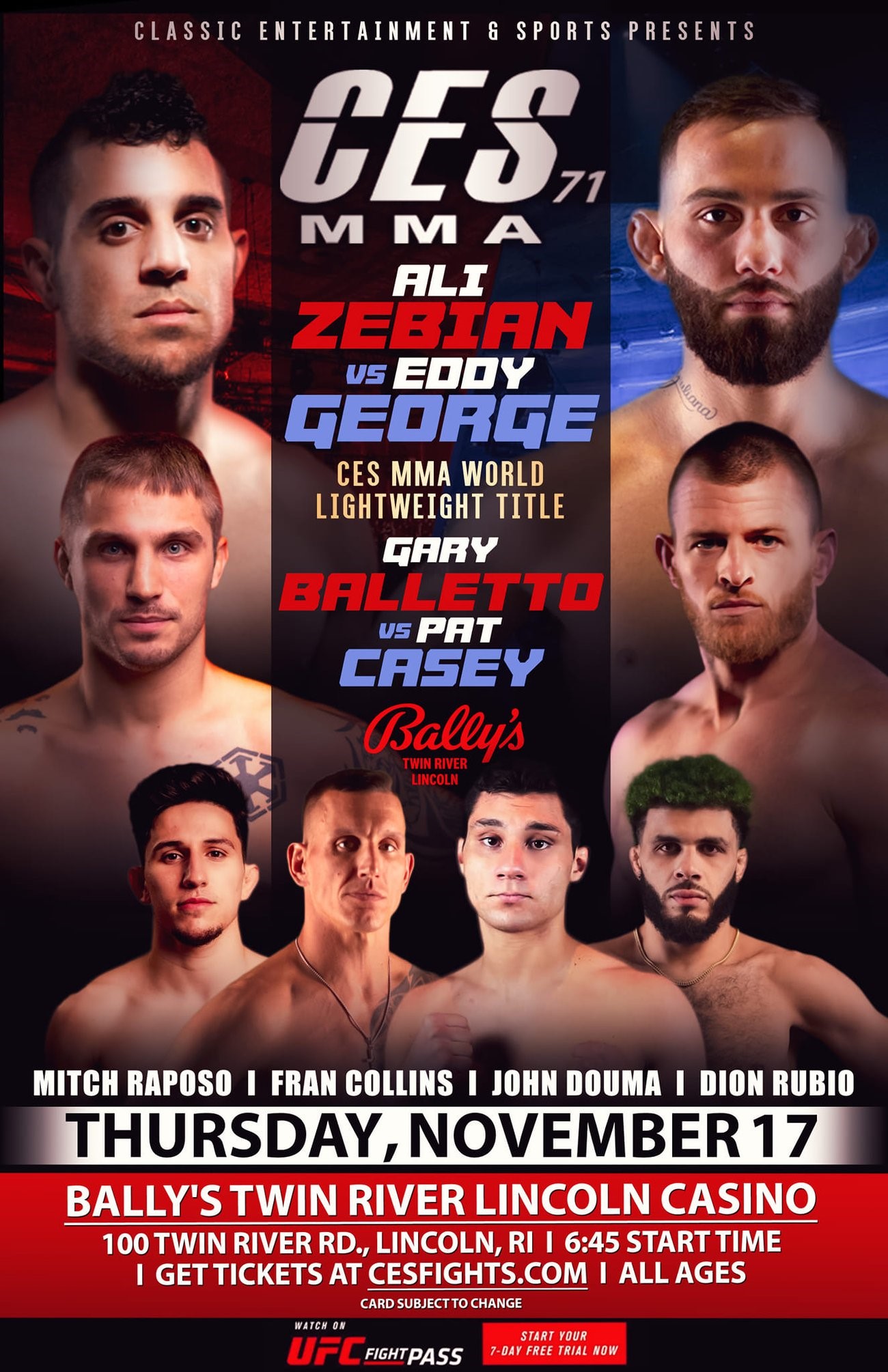 Lincoln, RI (October 26, 2022) – Fresh off one of the most talked-about fight cards of the year, CES MMA returns to Bally’s Twin River Lincoln Casino Resort looking to crown its next world lightweight champion.

The George-Zebian main event is tasked with topping CES’ last world title bout between Dan Dubuque and Nathan Ghareeb at CES 70, though the region’s No. 1 combat sports promotion is rarely short on thrilling moments inside the cage.

In addition to a new champion being crowned at the end of the night, CES 71 also welcomes the return of Cranston, RI, welterweight Gary Balletto III, who faces another tough test against Pat Casey of Springfield, MA; and an intriguing flyweight bout between rising prospect Mitch Raposo of Fall River, MA, and BrazilianFlavio Carvalho, who fights on U.S. soil for the first time since 2018.

CES 71’s main event showcases two fighters who’ve carved much different career paths fighting for a belt last occupied by Rhode Island’s Nate Andrews, who won it in 2018 and vacated it less than a year later.

The 30-year-old George (5-0), despite being long-considered one of New England’s top prospects, actually has less professional experience than the 28-year-old Zebian (9-2), who also has a wealth of experience under the bright lights of Bellator, Legacy Fighting Alliance, and the Professional Fighters League Challenger Series.

One of the best-kept secrets in the region, Zebian made his CES debut at CES 70 with a unanimous decision win over Sam Watford. George, despite having fought exclusively for CES since turning pro, has found other avenues to enhance his repertoire; prior to his fight at CES 69 he spent two weeks at The MMA Lab in Arizona working with the likes of Drakkar Klose and Benson Henderson. The results speak for themselves; in five pro fights, George has only been past the first round once.

Zebian is an entirely new challenge for George; the Lebanese lightweight has excelled regardless of the circumstances leading up to fight night, most notably beating Piankhi Zimmerman on short notice at Bellator 251 in 2020 amidst the pandemic and topping Aaron Blackie in April of 2022 at PFL’s Challenger Series 8.

Also on the CES 71 main card, Providence’s John Douma faces Johnny Baldridge of Orlando in a bantamweight showcase and lightweights Dion Rubio of Pawtucket, RI, and Kasey Raddon of Colorado face off in a battle of unbeatens. Heavyweight Brendan Battles of Eastham, MA, and middleweight Fran Collins of Worcester, MA, will appear on the undercard in separate three-round bouts.