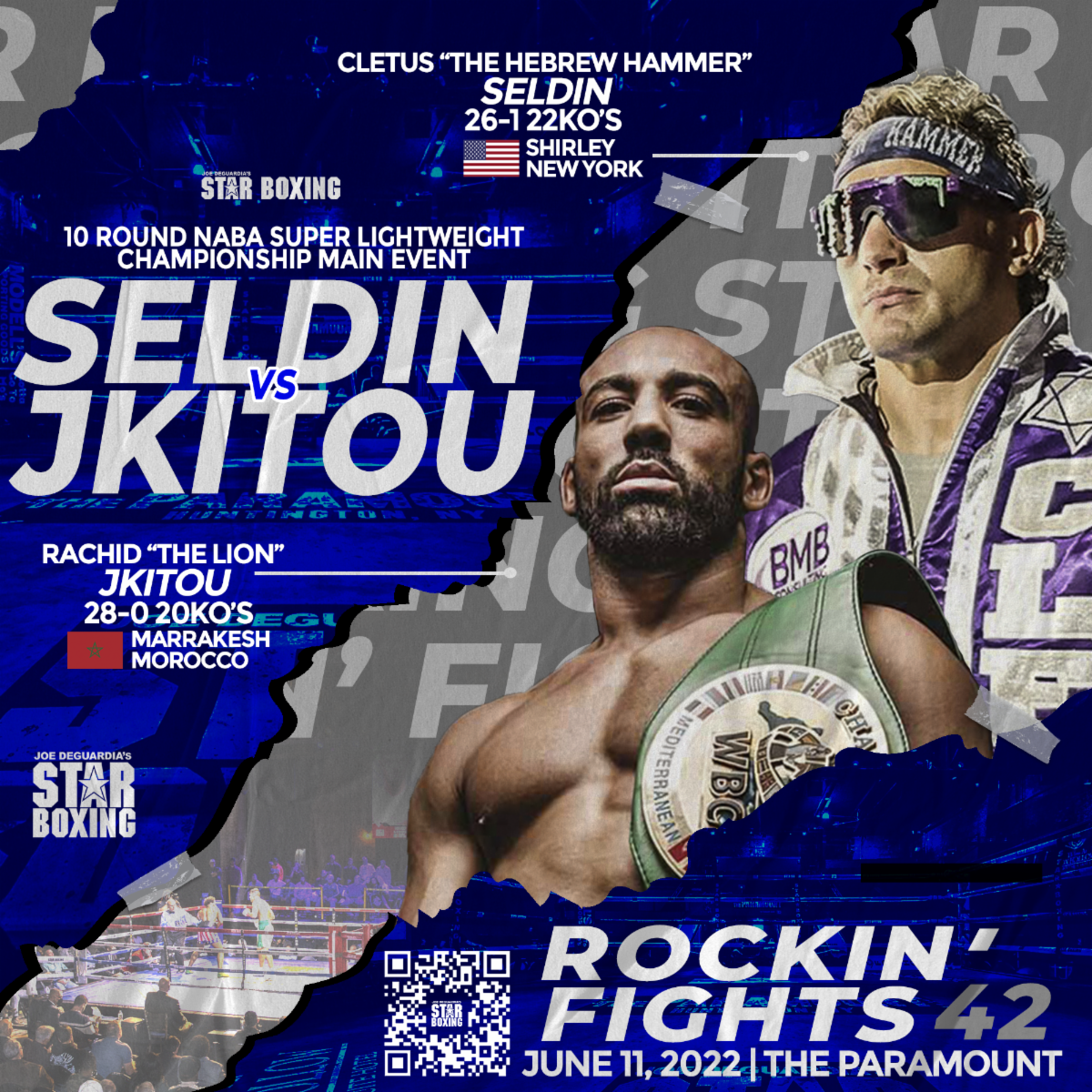 With this main event, Seldin will be making his record breaking 18th appearance at The Paramount. He already has the honored distinction of the most victories and knockout wins in “Rockin’ Fights” series history. Having fought in the very first “Rockin Fights” back in 2011, Seldin has since won 17 bouts at The Paramount, 14 of which came by way of vicious knockout. To say his ring moniker “Hebrew Hammer” proceeds him is an understatement. Seldin, a local boxing star, is also one of only three fighters in history to have fought in featured bouts on HBO In back-to-back months, a distinction shared with only boxing legends, Roy Jones Jr. and Mike Tyson. An emphatic win against a dangerous opponent in Jkitou will put Seldin into world title contention.

Seldin earned his NABA super lightweight title in 2019 when he stopped multi-time world champion and former undisputed champion, Zab Judah in the eleventh round at Turning Stone. Since then, Seldin has defended his title twice, most recently having defeated well respected William Silva (entered fight: 28-3 16KO’s) by devastating 7th round KO at the Barclay’s Center in Brooklyn this past October on TrillerVerz. June 11 will be the third time Seldin sets out to defend his NABA Title.

“I am excited to be back home after all these years.” said Seldin. “Nothing can compare to The Paramount crowds and amazing moments that I have built there over the years. This is a great fight against an undefeated fighter and I plan on defending my NABA title to get a big opportunity after this victory.”

Jkitou is a dangerous undefeated puncher who will put his perfect record on the line against Seldin, in the hopes of landing one punch to not only take home the NABA Super Lightweight Title, but to also put himself in direct position for world title contention. Jkitou is a former WBC Mediterranean, and French National Champion who fights in an aggressive pressure-filled style throwing devastating combinations. The French born Jkitou recently made the move to America in hopes of landing a big opportunity to put himself in the mix on the world stage, which he now has on June 11 at the Paramount.

Rachid Jkitou had this to say about the fight “I am coming to take the NABA Title from Cletus Seldin on June 11. I am excited for this opportunity and to be back in the ring on a big stage. Thank you to my team and to Star Boxing.”

As they say, when opportunity knocks, open the door – but under these circumstances beware, because opportunity comes in the form of two devastating punchers with a career’s worth of dedication on the line and only one man standing in the way. With a 78% knockout ratio for Seldin, and a 71% knockout ratio for Jkitou, the writing is on the wall for what should be an absolutely thrilling main event . . . while it lasts, ‘don’t blink’.

“As a boxing fan you cannot ask for something better than this main event,” said Star Boxing CEO JOE DEGUARDIA. “Two fighters in Cletus Seldin and Rachid Jkitou who put it all on the line every fight, willing to let their hands go to score a knockout. A lot is on the line in this fight and I commend both Cletus and Rachid for not backing down, taking a tough fight in order to take the next step towards world title contention. June 11 at the Paramount will be can’t miss action.”

TICKETS: Tickets to #RockinFights at The Paramount are now available at  ticketmaster.com or by visiting www.starboxing.com. Tickets start at $50. Purchase your tickets, HERE