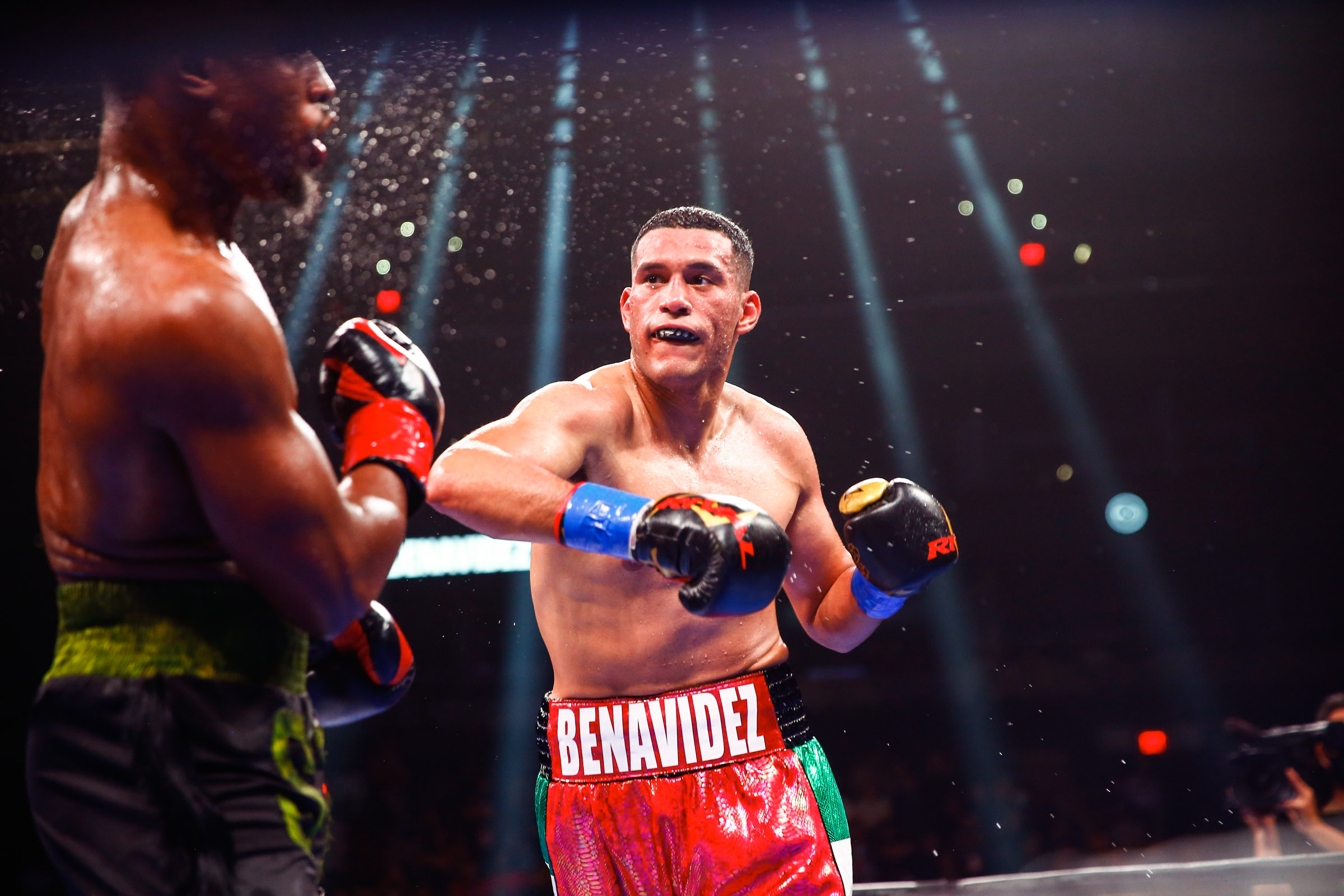 PHOENIX – November 13, 2021 – Unbeaten two-time world champion David “El Bandera Roja” Benavídez returned to his hometown of Phoenix for the first time in six years and closed the show in spectacular fashion, scoring a seventh-round TKO over contender Kyrone Davis in the main event of action live on SHOWTIME from Footprint Center in a Premier Boxing Champions event.

The 24-year-old Benavídez (25-0, 22 KOs) displayed a full arsenal of punches to dispatch a valiant effort from Davis (16-3-1, 6 KOs), who stepped in to fight the WBC’s No. 1 super middleweight contender on just two weeks’ notice. Davis showed incredible heart and guts, taking extreme amounts of punishment throughout the fight but he never hit the canvas and no matter how many punches he was hit with, he always returned the fire.

Davis’ trainer, Stephen “Breadman” Edwards, put an end to the punishment at :48 of round number seven when he threw in the towel. Watch the stoppage HERE: https://twitter.com/ShowtimeBoxing/status/1459749566018957313

“That was a great performance on my end,” Benavídez told SHOWTIME’s Jim Gray following the stoppage. “A lot of courage by Kyrone. A lot of respect to him and his team. He’s a tough dude. I came out here to give the fans a good fight and we both left it all out in the ring.”

With November 13 officially being named “David Benavídez Day” in Phoenix, the boisterous crowd at Footprint Center urged their hometown hero on with every punch. Benavídez landed 137 of 258 power punches (51 percent) and targeted Davis’ body throughout the fight. He connected on 50 body punches, 45 of which were power punches.

“It was tough but the thing about me is that I have so much conditioning that I’m going to keep going until he eventually stops,” Benavídez continued. “That’s what eventually happens. They tend to give up. I know that I don’t have that one-punch knockout power but I’m going to be ready to get you every single round.”

The 27-year-old Davis played his role in the crowd-pleasing main event and earned the respect and admiration of everybody watching.

“I’m a little disappointed,” Davis said. “I wish I could have pulled out the victory. I don’t like losing. I came in on two weeks’ notice. Shame on (Jose) Uzcategui for being on steroids. I had to come in on short notice but I fought like a warrior. I’m living my dream. I love coming out here and putting on a great show. Fighting is in my blood. I was raised like this.”

With the unbeaten streak to start his career still intact, Benavídez, the former two-time super middleweight champion, now has his sights set on a mega-fight at 168 pounds.

“Everybody wants to see me against Canelo, right? I don’t care what his assessment of my fight is but they keep putting these contenders in front of me. My last fight was a WBC Title Eliminator and that’s why I’m here holding my belts. They need to give me the opportunity. I’ll go through anybody. Whoever they want me to go through. If (Jermall) Charlo wants it, he can get it too. But he doesn’t want to get in the ring with me.”

“I don’t know how I got a draw,” a disappointed Benavídez said over loud boos from a hometown crowd that so badly wanted to see Benavidez earn the win. “We can run it back. I beat him. I thought I beat him. He kept running. He didn’t want to stay in the pocket. I can’t do anything about the judges’ decisions. I felt good. He just kept holding. I beat him every round. What can I do?”

In Benavídez’s first action since dropping a 147-pound title showdown to Terence Crawford in October 2018, it was a battle of his power and body work versus Torres’ activity and accuracy. Benavídez spent a majority of the fight attempting to walk down Torres. He landed 64 body punches throughout the 10 rounds, but was susceptible to Torres’ counter-punching and accuracy to the head. Torres was the much busier fighter, throwing 612 punches to Benavídez’s 375. However, the final total landed punches were close with Torres landing 135 and Benavídez landing 122.

The 10th and final round was imperative to the fight’s outcome. Entering the round, Torres trailed on all three judges’ scorecards. He out-landed Benavídez 13-4 on 23 more punches thrown, winning the round on all three scorecards to turn the fight from a unanimous decision loss to a majority draw.

“You can hear from the crowd. I felt I won the fight,” said Argentina’s Torres. “As a visitor, I came here to his backyard and they still gave it a draw. Imagine if this would have been in Buenos Aires. I definitely want the rematch. Let’s see what my management team says but I definitely want it.”