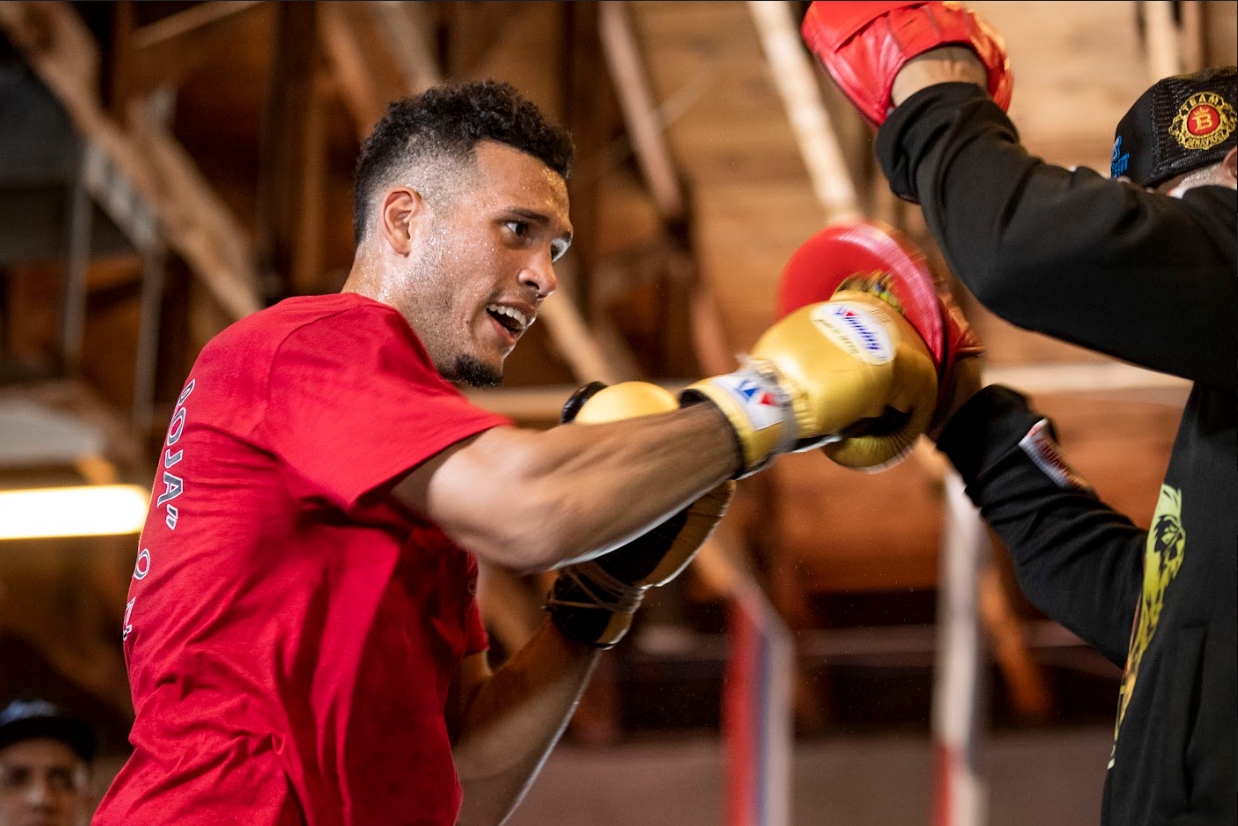 PHOENIX – May 18, 2022 – Unbeaten two-time world champion David “El Bandera Roja” Benavídez and former world champion David Lemieux officially kicked off fight week events with a media workout on Wednesday ahead of their 12-round showdown for the vacant Interim WBC Super Middleweight Title which headlines live on SHOWTIME this Saturday, May 21 from Gila River Arena in Glendale, Arizona in a Premier Boxing Champions event.

The two-power punchers (combined 85% KO rate for Benavídez and Lemieux) showed off their skills at Central Boxing Gym, as they look to grab the interim title and move one step closer to regaining world champion status with an emphatic victory on Saturday night. For Benavídez, he will be returning to fight in his home state for the second-straight outing, after he knocked out Kyrone Davis in front of his hometown fans in November.

The fighters were joined by their respective trainers at the media event, with Benavídez’s father Jose Sr. in attendance in addition to Lemieux’s renowned trainer, Marc Ramsay. Here is what the workout participants had to say Wednesday:

“I definitely want to go out there and follow my gameplan. I don’t care [if the KO] comes in the first, second, fifth or 12th round. When it comes, it comes. I visualize everything I’m going to do in the ring.

“I just hit the weight yesterday and now everything is amazing. We took that stress off the table after four months of hard work. Now, I’m excited to go out there, fight for the title and give the fans a great fight.

“It makes me happy to be able to inspire kids and to see the smiles on the faces of the people in my city. It’s inspiring to have them come out and support me the way that they do.

“It means the world to me to be here in my hometown with my family – both my son and my dad. Now I know what my dad meant when he said that once you have a child, your life changes. My son Anthony is 18 months  and he’s given me so much motivation to be the best version of myself.I have a newfound focus and I’m ready to conquer the division.”

“If he wants a war, he’ll get a war. I’m strong and I’ve very confident in my abilities. I know he’s a very strong fighter, but we have a plan going in against him. We’re not worried and we will do what we have to do to be at our best on fight night. David Benavídez will have his hands full on Saturday night.

“If you know David Lemieux, he’s never refused a fight and he’s always taken whatever fight they put in front of him. When we had big fights in the past, we always took them. If you want to be a world champion you have to fight the best.

“He’s a great fighter and you can’t take anything away from him, but he’s never fought David Lemieux and he will see what that means on Saturday night. I know what I’m going in there against. Does he know what he’s going in against?”

“I ran this gym for five years, and we never thought that we would get to where we are right now. My heart beats with pride seeing David be embraced like this. This is just the beginning though.

“I never thought I would be a boxing trainer. I just wanted to help my son achieve his goals. Now we are here and very thankful for everything we have been given.

“We are very focused on a hard-hitting opponent in Lemieux. It’s going to be a spectacular fight and we are not about to look any farther than that.”

“Everybody knows David Lemieux is an aggressive fighter, and David Benavídez is an aggressive fighter. I don’t think either fighter will change that the night of the fight. That’s only going to give the fans an exciting and action-packed fight. Because of the style of both fighters, it only guarantees it will be a great fight. “Benavídez is a complete fighter. He’s a big guy, he’s fast, and he’s also powerful. So he’s the complete package. But at this level everyone has the package to become the elite. You cannot escape from these big fights if you want to be world champion.”