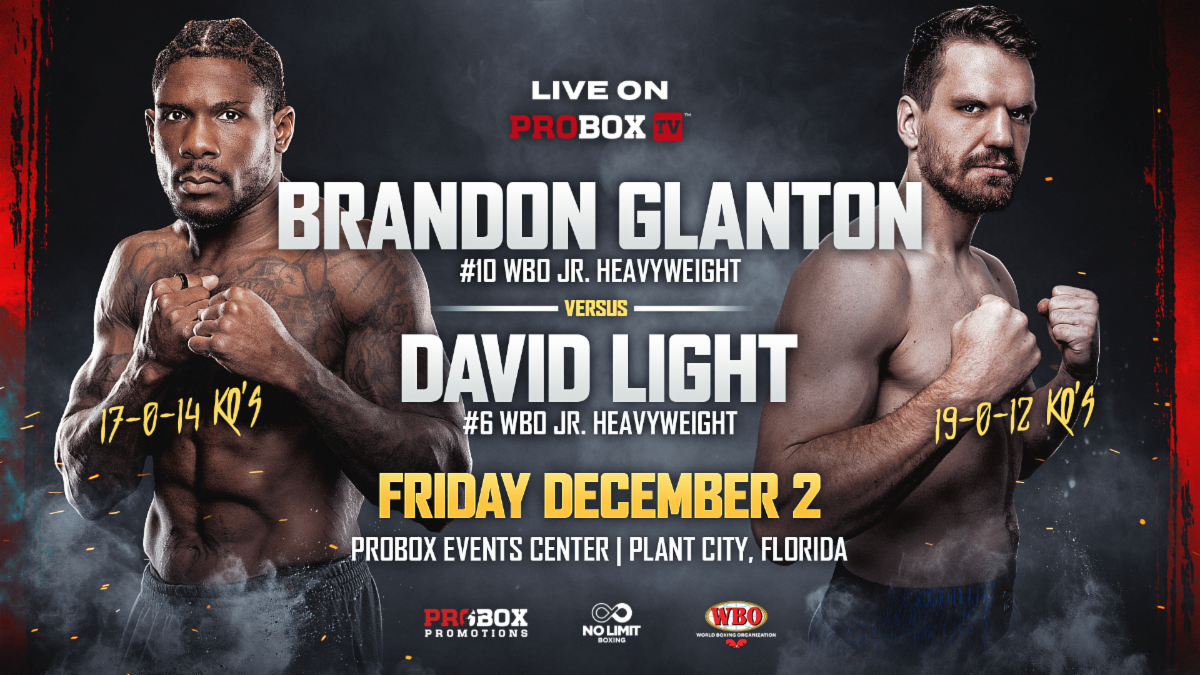 Tickets, starting at $40, can be purchased at Eventbrite.com HERE

David “The Great White” Light (19-0, 12 KOs) from Takapuna, New Zealand won the WBO International title on May 5, 2022, with a first-round knockout. He is ranked No. 6 by the WBO. His most recent bout on October 8 was a second-round knockout win.

“Training is going great – it’s hardest I have ever trained in my life and I am leaving no stone unturned,” said Light. “We have watched Glanton and he’s a very good strong fighter, the sort of guy people avoid but we are up for the challenge and totally believe we have got what it takes to win. We coming to beat him at his own game. We are coming to put him to sleep. After December 2nd everyone is going to know who I am as losing is not an option.”

Brandon “Bulletproof” Glanton (17-0, 14 KOs) from Atlanta, Georgia is ranked No. 10 by the WBO and is coming off three consecutive KO wins, the last a second-round blowout of Mario Aguilar on September 9, in Plant City on ProBox TV.

Glanton is from Atlanta, GA where he does his maintenance training. He does his heavy training in Fort Mitchell, Alabama, where he is now.

This guy is my next victim,” said Glanton. “I have been training pretty hard for him. I take everybody seriously, but I am going to melt this guy. He is a one-two fighter and has decent hand speed – not much foot movement or power but he’s a veteran and knows his way around the ring. He will look to make it a rangy fight, but I am just the opposite. For as long as it lasts it will be a great fight for the fans. I won’t pick what round it will end – it will come down to however way I am feeling. I am going to knock him out and the tougher he is the better. I am going to hurt this guy. I will lay him out cold.

“ProBox has been nothing short of amazing and Garry Jonas saw what I bring to the table and is helping push my career to the next level, And I’m happy I have some great names commenting behind me.”

Get the ProBox TV App HERE