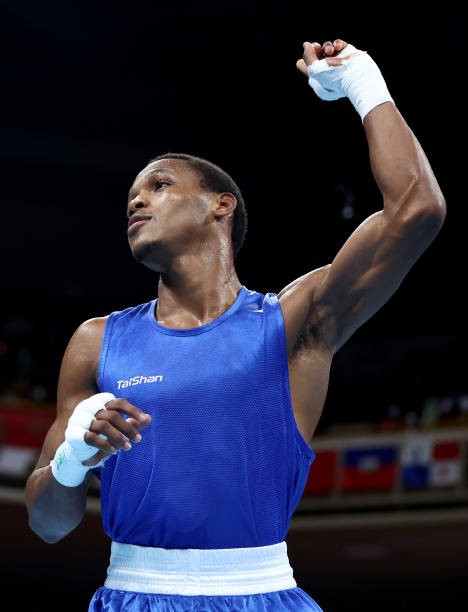 Euri had qualified for the Olympic Games in Tokyo and had to put his professional career on hold. At the Tokyo Olympics, Cedeño Martinez reached the quarterfinals after a 67 second knockout against Eldric Sella from Venezuela in the opening round of the tournament. In the second round he outpointed Francisco Daniel Veron from Argentina, before losing a split decision in a very competitive fight against the heavily favorite Oleksandr Khyzhniak from Ukraine.

Euri Cedeño Martinez started boxing at age five, as he was inspired by his father who was a boxing trainer in the Dominican Republic. Throughout his amateur career, he amassed numerous national titles, and represented his nation at every major international tournament. His most recent achievement was winning the Independent Cup International Tournament where he stopped all of his opponents on his way to the gold medal.

“Winning the Independent Cup was a good way to finish my amateur career. I’m very excited to start my journey in the professional ranks,” said Cedeño Martinez.

The 22-year-old takes the next step toward that goal after signing with advisor Trifon Petrov. For Cedeño Martinez the decision came down to trusting Petrov’s deal making abilities and his character.

“Trifon Petrov has been around the game and has a very solid stable of young fighters. I’m very excited to be a part of his team. He is a very genuine person and I saw qualities in him that I did not see in other managers who wanted to sign me, it was an easy decision to trust him with my career,” said Euri Cedeño Martinez.

For Petrov, it was a combination of his boxing abilities and character that made him pursue the Dominican prospect.

“With over 400 amateur fights and countless achievements in the amateurs, Euri is a true blue chip prospect. Above all, he is a great human being and I think he’ll be a great role model for the upcoming generation of young athletes,” said Trifon Petrov.

The Pennsylvania based company has proved they can build a fighter from the ground up over and over again. Marshall Kauffman has promoted well over 130 events across all big media platforms such as Showtime and Fox.

“I wanted to sign with Marshall Kauffman as I heard great things from my advisor and my brother who has known Mr. Kauffman for a couple of years. I have seen the work Marshall and Andrew have done with all the fighters under Kings Boxing, the work they were able to do with WBA interim World Champion Ra’eese Aleem and the WBC/IBO unified World Champion Alycia Baumgardner speaks for itself. I’m very excited to work with Kings Boxing,” said Cedeño Martinez.

Marshall Kauffman, who was recently inducted into the Pennsylvania Boxing Hall of Fame can’t wait to see his new prodigy in action.

“It’s such a rarity to see a fighter who is a complete package at such a young age. At only 22 years old Cedeño Martinez has all the physical gifts, mental toughness and ring savvy to achieve greatness in the sport of boxing,” said Kauffman.

Euri Cedeño Martinez will be training in Reading, Pennsylvania under the tutelage of Denny Rivera known as “Sensei”. Rivera is well known from his work with World Champions such as Roman “Rocky” Martinez, Elio Rojas and Cesar Seda.

Martinez decided to follow his older brother Hendri’s footsteps and turn professional. Hendri Cedeño Martinez amassed a record of 4-0 in his first year as a professional fighter. While both brothers wanted to turn professional together, Euri’s debut was on hold due to competing in the Olympics.