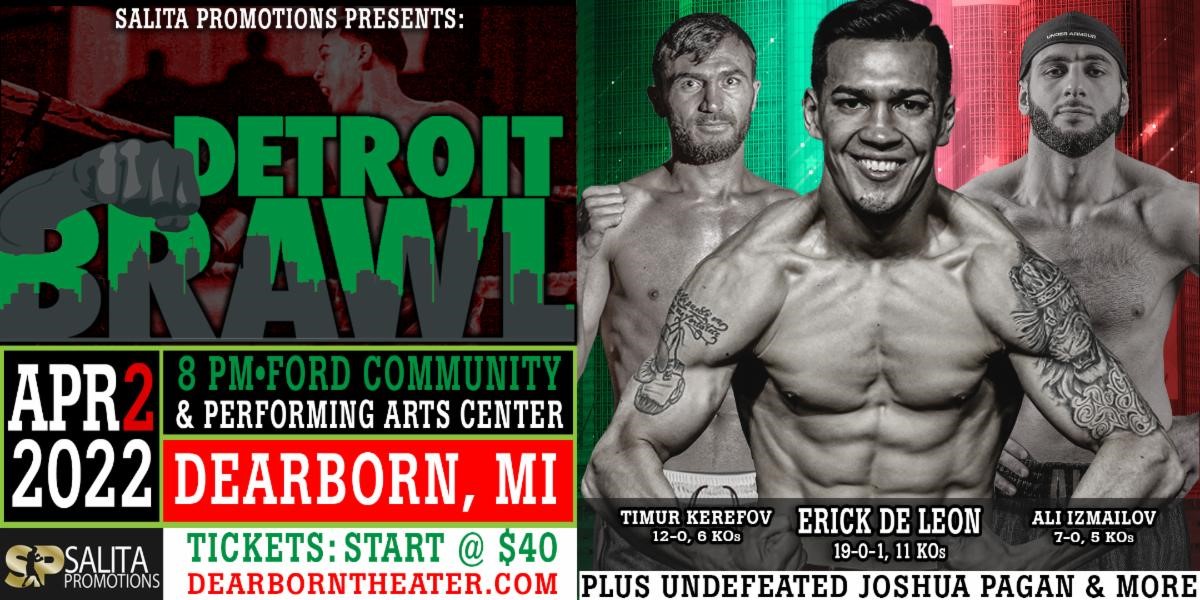 (March 9, 2022) – Rolling on the exciting momentum of two sold-out events there in the past two months, Salita Promotions will return to the Lincoln Ballroom of the Ford Community & Performing Arts Center in Dearborn, MI, on Saturday April 2, 2022, for another fantastic Detroit Brawl event.

In the main event this time will be the return of one of Detroit’s own, as undefeated power-punching lightweight contender Erick De Leon (19-0-1, 11 KOs) will return after nearly three years’ absence from the sport due to injuries to face hard-nosed Mexico City veteran Juan Jose “Piquet” Martinez (28-11, 20 KOs).

Born in Mexico and raised in Detroit, DeLeon began boxing in the famed Kronk Gym where he developed a strong bond with the late Emanuel Steward. As an amateur, DeLeon (19-0-1, 11 KO) was a three-time national Golden Gloves champion in three different weight classes and a leading contender to make the 2012 USA Olympic Team before a shoulder injury derailed his dream. He elected to turn professional instead in 2012.

Out of action since 2019 because of a series of injuries before the pandemic brought a halt to the sport overall, De Leon says he’s excited to be back in business.

“It feels great being the main event, knowing all my fans will be there cheering me on. I’m excited to showcase my skills, that I’ve worked so hard since a young boy!” said a happy De Leon. “I’m very excited to be coming back, the time off will not stop me from getting a world title for the city of Detroit. I will win, because if my hunger and I want to dedicate this fight to my beautiful cousin Evelyn Garza, who just passed away 2 days ago!

Blessed with excellent hand and foot speed and the fast-twitch reflexes that only come from a lifetime in the sport, Kerefov was a highly decorated amateur boxer, winning several important tournaments and 298 of his 310 unpaid fights. Designated a Master of Sports, he fought at the elite level internationally for nearly a decade.

“I have been training in Florida and learning under the tutelage of Sugarhill Steward,” said Kerefov during a break in training. “I look forward to showcasing my skills and coming one step closer to a world title shot.”

Now working with highly regarded trainer and former champion John David Jackson, Ali Izmailov is a true blue-chip light heavyweight prospect. In his two-year pro boxing career, Izmailov is already world rated and has held the WBO Global Championship. The 28-year-old Izmailov is a former amateur standout, having competed in multiple elite international tournaments. Widely regarded as one of the hardest punchers in the division, Izmailov stands 5′ 11½″ with a muscular frame, strong punching power, deceptive quickness and a very sturdy defense, Izmailov is a punishing counter puncher with anvil fists who brutalizes opponents into submission.

“I love my activity, staying busy in the ring and learning with trainer John David Jackson,” said an energized Izmailov. “This will be my third fight in seven months. What I learn in the gym, I put to work in the ring. I made my USA debut in Detroit and look forward to backing it up with another impressive performance.”

“Training is going good,” explained Pagan. “We are currently in Fort Lauderdale about to start a mini camp. We’re hoping to get some great sparring in preparation for our next bout, and we are prepared for the challenge, hard work and dedication it takes.”

Promoter Dmitriy Salita, who’s never made a secret of his mission to revive the sport in The Motor City, says he’s happy to be bringing another world-class show to Detroit for the fans who have gotten behind the series.

“I look forward to another exciting Detroit Brawl event that will feature local, national and international world class talent,” said Dmitriy Salita. “Detroit is America’s Greatest comeback City, and, in due time, I have confidence that this series will produce elite world champions from home and abroad. This will be an exciting show from bell to bell.” All bouts are subject to change. The Ford Community & Performing Arts Center is located at 15801 Michigan Ave. in Dearborn. On fight night, doors open at 7:00 pm and the action starts at 8:00 pm.