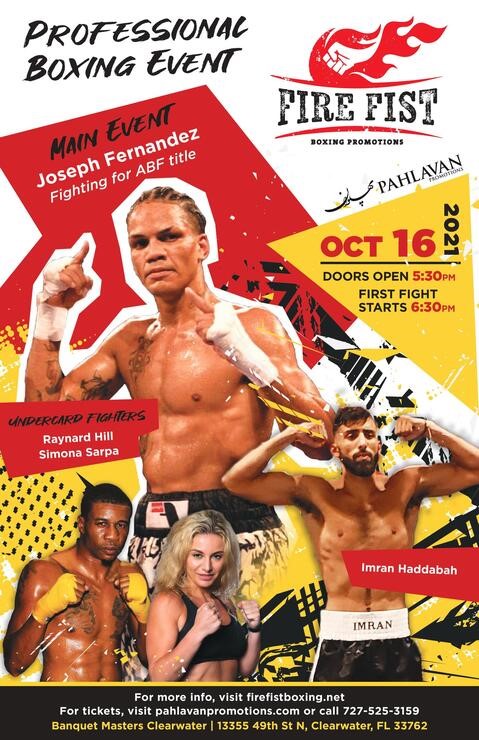 The card is presented in association with Pahlavan Promotions and tickets are on sale at bit.ly/boxing-tickets or by calling 727-525-3159.

Headlining this exciting evening of boxing will be a ten round 140 pound showdown between St. Petersburg, FL’s Joseph Fernandez and Panama’s Jose Forero for the ABF Atlantic championship.

Fernandez,13-3-3 (4 KO’s), is riding a 6 fight win streak and stopped his last three foes. A crowd favorite in the Tampa Bay region, Fernandez most recently scored a sixth round stoppage of 33 fight veteran Carlos Pena.

The heavy-handed Forero has a record of 13-8-1 with 11 wins by knockout. He’s faced several notable foes including George Kambosos, Jaime Arboleda and former world champion Jezreel Corrales. In Forero’s last fight he put forth an admirable effort in a 9th round stoppage defeat against contender Willian Silva.

In an explosive eight round matchup where somebody’s 0 must go, heavyweight Geovanny “La Bestia” Bruzon puts his 6-0 record on the line against 5-0 Lenier Pero. Both fighters are originally from Cuba and have decorated amateur backgrounds. The winner of this contest will take a significant step forward in the heavyweight division.

Plant City, FL based Brazilian lightweight Willian “Baby Face” Silva and light heavyweight Imran Haddabah of St Petersburg are scheduled to appear against opponents to be named. Additional bouts will be added shortly.

“We’re glad to be back in Clearwater at the beautiful Banquet Masters venue working alongside our friends at Pahlavan Promotions,” said Jody Caliguire of Fire Fist Boxing Promotions. “This card has a good mix of everything – local talent, international boxers plus a rare matchup between undefeated and highly skilled heavyweights. I’m looking forward to seeing everybody on the 16th.”