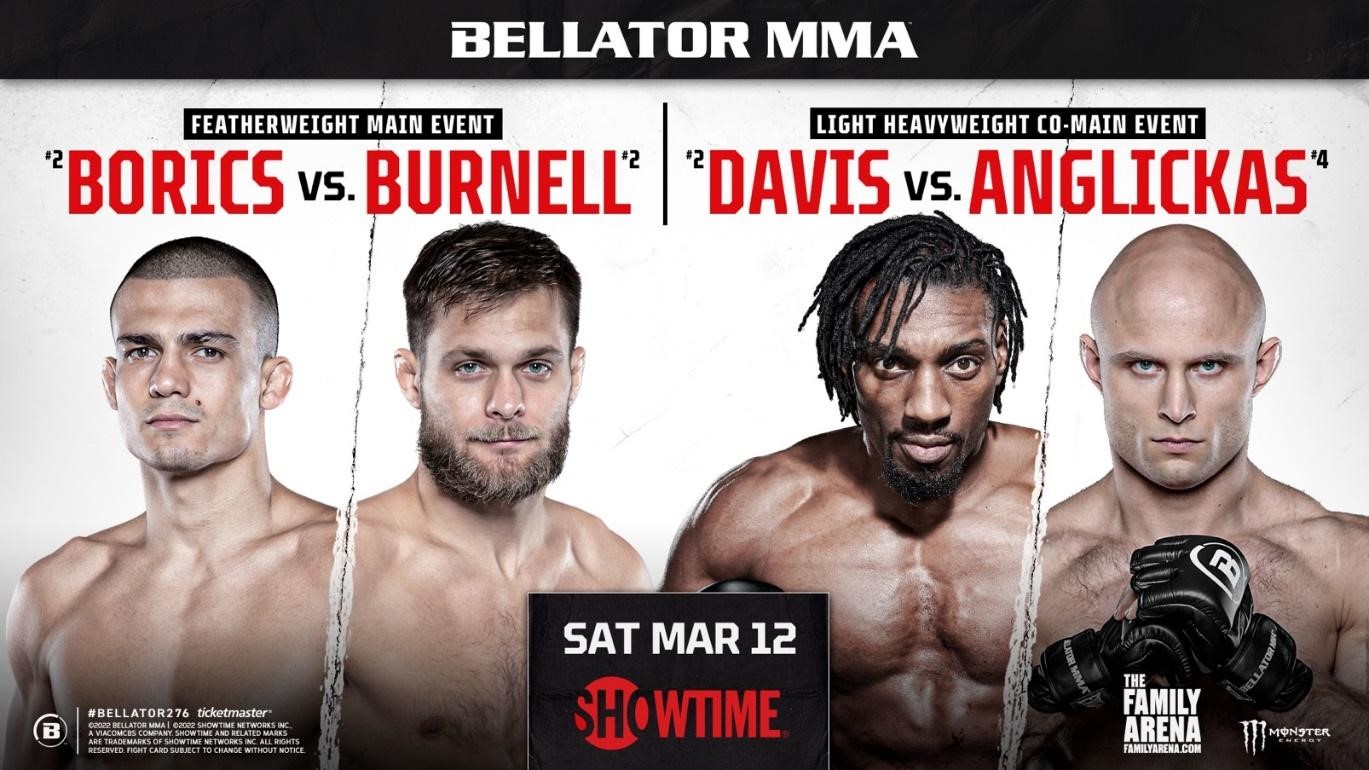 Former title challenger and No. 2 ranked-John Salter (18-5), as well as undefeated BELLATOR MMA No. 3-ranked Johnny Eblen (10-0), and women’s No. 2 featherweight Cat Zingano (12-4) hope to take the next step toward BELLATOR MMA gold as they join the four co-headline brawlers currently ranked among the upper echelon of their respective divisions.

Featured among the magnificent MMA melees will be three of the top-ten middleweights, five undefeated and one unblemished amateur, four top-two contenders, and ten fighters ranked along with BELLATOR MMA’s elite.

In the main event of the evening, Adam Borics (17-1) and Mads Burnell (16-3), two featherweights currently tied at No. 2 in the official BELLATOR MMA rankings, will square off for a future shot at the BELLATOR 145-pound world title. In the co-featured bout, former BELLATOR Light Heavyweight Champion, 13-time BELLATOR veteran, and No. 2-ranked Phil Davis (23-6, 1 NC) will open his 2022 campaign against No. 4 Julius Anglickas (10-2), who most recently challenged for the 205-pound title. Additionally, the main card will spotlight an international lightweight extravaganza as undefeated New Alliance Jiu-Jitsu team member Jay-Jay Wilson (8-0) of Auckland, New Zealand, moves up in weight to meet Dagestan, Russia’s Gadzhi Rabadanov (16-4-2), who is coming off a first-round knockout in his promotional debut at BELLATOR MMA 263 in July 2021.

Prior to the consequential co-featured contests, a pair of top middleweights will round out the main card as Salter and Eblen square off for a shot at the winner of the upcoming world title bout pitting 185-pound Champion Gegard Mousasi against No. 1-ranked Austin Vanderfordat BELLATOR MMA 275 later this month in Dublin, Ireland.

Armed with an 8-2 BELLATOR record, Salter, a 15-year pro MMA veteran out of Nashville, Tenn., holds the promotional record for most submissions in BELLATOR MMA middleweight history, and has stopped 17 of his 23 opponents. Nicknamed “Diamond Hands” due to his love for crypto currency and willingness to hold onto his investments, Eblen is coming off a 71-second annihilation of Collin Huckbody at BELLATOR MMA 272 in December 2021. The six-time BELLATOR MMA veteran and American Top-Team product, who recently signed a six-fight BELLATOR contract extension, has secured six opening-round stoppages, including two of his three 2021 opponents.

Set to make her third straight BELLATOR MMA appearance with aspirations of challenging BELLATOR MMA Women’s Welterweight World Champion Cris Cyborg, Zingano has had a decorated fighting career. The former NCAA Division III All-American wrestler became the first mother to compete in the UFC and initial woman to capture the company’s “Fight of the Night” award, counting victories over Miesha Tate, Amanda Nunes, Marion Reneau, and Gabrielle Holloway. Recently, “Alpha” was featured in the series “Double Duty” that chronicled the attempts to maintain a balance between the daily responsibilities of parenthood and earning a living as a pro athlete.

A former Invicta FC women’s featherweight champion, Sorenson started kickboxing after the passing of her best friend. After vacating her crown and requesting a release from Invicta in July 2021, the Minneapolis mauler signed a multi-fight deal with BELLATOR MMA in mid-2021. Soon after joining the pioneering company, the 35-year-old recorded a hard-fought split decision over Roberta Samad at BELLATOR MMA 264 in Uncasville, Conn.

Furthermore, added to BELLATOR MMA 276: Borics vs. Burnell is a memorable middleweight match pitting undefeated, No. 6-ranked 185-pounder and owner of three consecutive stoppages Romero Cotton (5-0) of Hutchinson, Kansas, who will bravely battle the horrors of “The Boogeyman” Lance Wright (5-2). Moreover, former Division II All-American wrestler and fantastic featherweight Cody Law (5-0), fresh off his third opening-round finish, strives to avoid being scared off by “Phantom” Johnny Soto (5-2) of Escondido, Calif.

Tickets for BELLATOR MMA 276: Borics vs. Burnell are on sale now at both Ticketmaster.com and Bellator.com