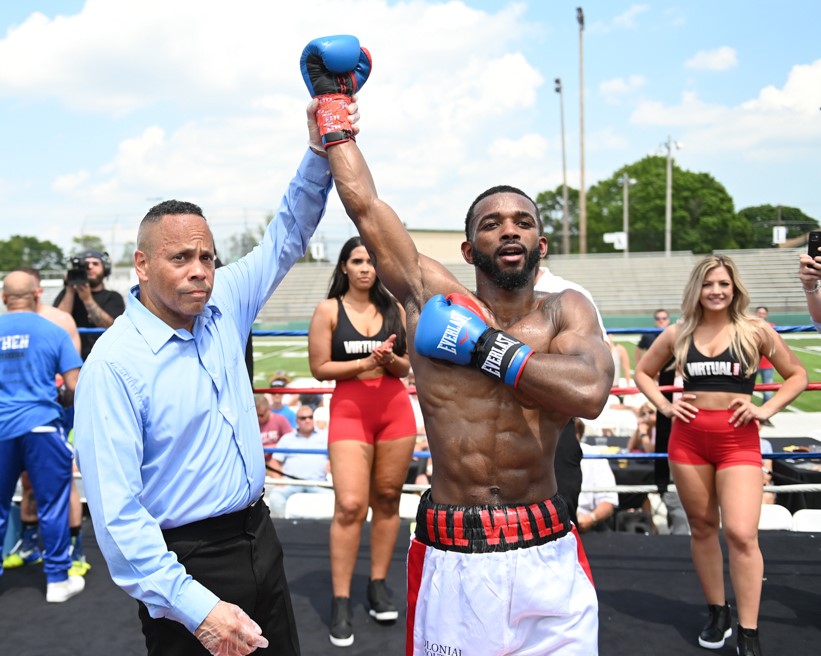 WARWICK, RI (February 15) – Wilson Mascarenhas (@illwill_) can hardly sleep these days. There’s a nervous energy as he prepares for the next big step in his professional boxing career this Saturday at the Crowne Plaza Hotel.

Mascarenhas, a native of Portugal who has lived in New Bedford, MA, since the age of 12, genuinely loves what he does in and out of the ring, so it’s understandable why one of boxing’s busiest fighters has a hard time settling down at night.

Fighting for the first time since he scored his first career knockout win in June, Mascarenhas (4-1, 1 KO) steps up to face Virginia southpaw Akeem Jackson (5-4, 5 KOs) (@action2xs) in the first six-round fight of his career Saturday at “Rhode Wars,” CES Boxing’s 2022 season opener.

“I’m excited,” said the 27-year-old super lightweight prospect. “I’m stepping up and getting out of my comfort zone. It’s an opportunity to give people more of what they want to see. I can’t wait to showcase my skills.”

One of New England’s fastest-rising stars – and, perhaps, most popular fighters – Mascarenhas keeps busy in his day job as a behavioral health case manager working with New Bedford youth from the elementary school level all the way through college to help them choose the right path in life. Right now, his primary focus is high school students; it’s a sense of pride for Mascarenhas to provide them with the guidance he didn’t have growing up.

“That definitely fuels my tank,” Mascarenhas said. “When I was younger, I was kind of all over the place trying to figure out my purpose. I didn’t have much of a father figure to lean on in life. I saw a lot of things growing up that I knew I didn’t want to go through. I wanted to take a different route. And I want the same for the students I mentor.”

Working with youth wasn’t always on Mascarenhas’ radar. At Greater New Bedford Regional Vocational Technical High School, he played several sports – including soccer, track, and wrestling, and also learning Brazilian Jiu-Jitsu – while studying carpentry. Instead of entering the carpenters’ union after high school, he decided to continue to his education at Bristol Community College, where he briefly considered pursuing a career in sports medicine. Behavioral health eventually became Mascarenhas’ preferred path when he realized he could use his blossoming career in the ring to inspire others to chase their own dreams.

“I like what I do inside the ring and outside the ring,” Mascarenhas said. “I’m living my dream both ways.”

Whether in the ring or out in the field visiting schools, Mascarenhas’ energy is contagious. In just a short time, he’s become one of the region’s biggest draws, consistently bringing huge crowds wherever he fights. Back in June, while fighting outdoors under the bright, sweltering sun, Mascarenhas leaned on that support from his fans to get him over the hump midway through his battle with Connecticut’s Geoffrey Then. The end result was a sensational, third-round knockout win, the first stoppage of his career and his fourth consecutive win overall.

“As the heat started getting to me, I thought to myself, ‘This is what you prepared yourself for. This is what you signed up for.’ I knew I had to dig deeper,” Mascarenhas said. “I knew I had more in the tank. Having the crowd and the support behind me really boosted me and I was able to turn it up another notch. I knew I had it in me.”

While Mascarenhas has enjoyed nothing but success of late, his career got off to an inauspicious start in February of 2018 when he lost his debut to Miguel Ortiz of Springfield by unanimous decision. Mascarenhas fought hard and showed progress toward the finish, but lost every round on the scorecards. A setback like that can derail a fighter mentally, but losing actually Mascarenhas focus even harder. The possibility of dropping another fight no longer crosses his mind. Winning is the only option, and he’s continued to get better with each fight.

“I’m glad I took a fight like that in my first fight. It brought something out of me,” Mascarenhas said. “That’s something a lot of up-and-coming fighters won’t go through until they reach maybe their 10th fight, but I’m glad I experienced it early. I experienced defeat and didn’t like it one bit, so every time I get a fight now I have a different type of purpose.

Mascarenhas didn’t come this far to quit. There’s so much riding on each fight, whether it’s his own chase for championship glory, or the pressure being a positive role model for the students he mentors. Although he tasted defeat early in his career, Mascarenhas is now a proven winner both in and out of the ring. He’s promising an even stronger, more determined version of himself this Saturday as the quest for greatness continues.

“All of my opponents have been tough in their own way. It brings a different type of dog out of me,” Mascarenhas said. “I can’t wait for the 19th to see what this opponent brings out of me.”