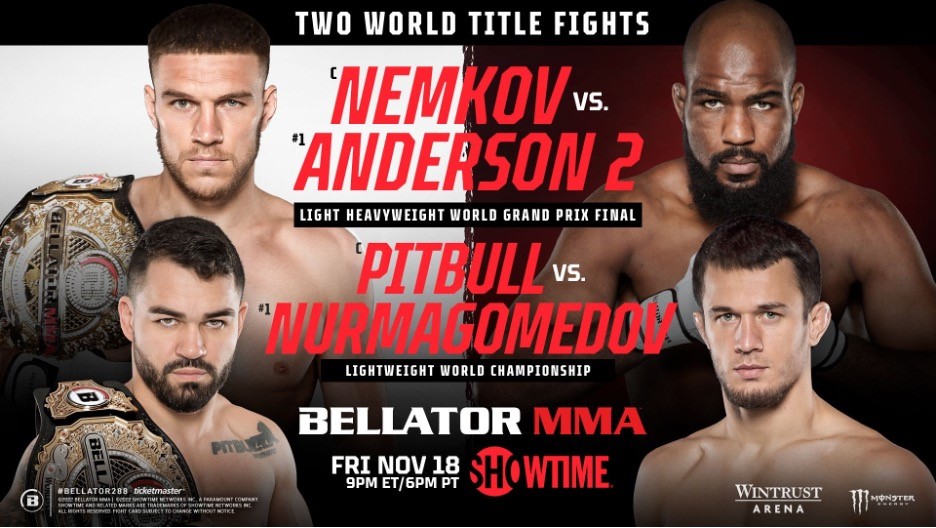 The five-fight main card of BELLATOR 288: Nemkov vs. Anderson 2/Pitbull vs. Nurmagomedov airs LIVE on SHOWTIME beginning at 9 p.m. ET / 6 p.m. PT. The preliminary portion of the card will begin three hours prior across the BELLATOR MMA YouTube Channel, Showtime Sports YouTube Channel, and Pluto TV.

Tickets are on sale now and available at Bellator.com and Ticketmaster.

Joining BELLATOR 288 will be one of BELLATOR’s brightest prospects, undefeated 26-year-old light heavyweight Sullivan “Sully” Cauley (4-0). The protégé of BELLATOR heavyweight champion Ryan Bader and No. 10-ranked light heavyweight will face fellow unbeaten American Jay Radick (3-0). Cauley will put his four-fight, first-round knockout streak on the line in this preliminary bout as he welcomes the six-foot-five Radick to the BELLATOR cage.

In an all-Brazilian lightweight matchup guaranteed to deliver fireworks, the always entertaining Killys Mota (13-3) will look to build off his BELLATOR 282 victory over Dan Moret (15-8) against promotional newcomer and countryman Jairo “Mumuzinho” Pachecho (7-0). Mota has taken his game to the next level after joining American Top Team, and his potential to disrupt the division is evidenced by his past wins over Moret, Mandel Nallo,andBobby Lee. Opposite him will be Pachecho, who at just 25 years old has looked sensational through seven professional outings. The BELLATOR debutant seeks to add a third straight stoppage to his resume in Chicago.

The full lineup for BELLATOR 288: Nemkov vs. Anderson 2 / Pitbull vs. Nurmagomedov is as follows: