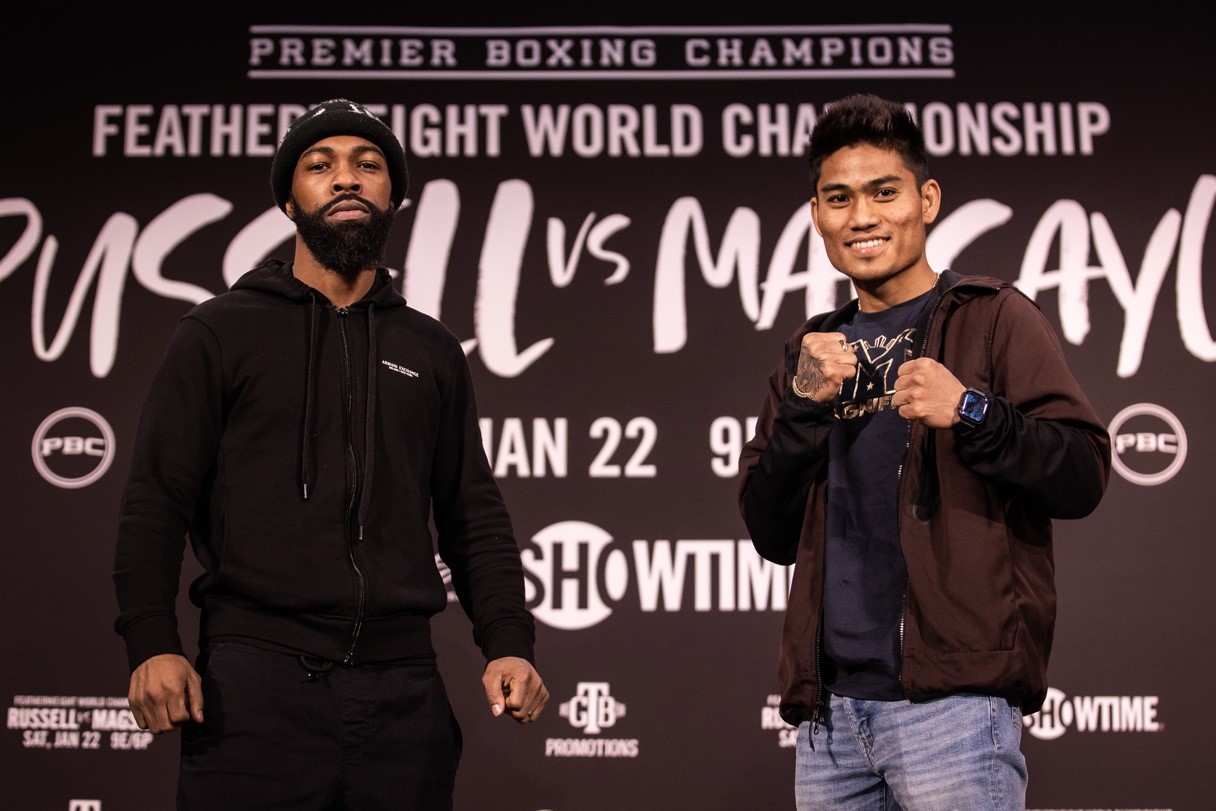 The press conference also featured super lightweight contenders Subriel Matías and Petros Ananyan, who meet for a rematch in the 12-round co-main event, plus hard-hitting featherweight contender Tugstsogt “King Tug” Nyambayar and once-beaten contender Sakaria Lukas, who square off in the 10-round telecast opener at 9 p.m. ET/6 p.m. PT.

Tickets for the live event, which is promoted by TGB Promotions, are on sale now and can be purchased through Ticketmaster.com.

Here is what the fighters had to say Thursday from the Music Box at Borgata Hotel Casino & Spa in Atlantic City, N.J.:

“At the end of the day, I’m a gladiator and I love what I do. I love showing the skillset that I bring to the sport of boxing. Nothing has come easy for us. This is not unfamiliar territory for me or my family.

“There are no concerns about ring rust. I’m always in the gym. I haven’t taken two months off from training since I was about four or five. Boxing is not just what I do, it’s a lifestyle for me.

“If I go out there and I destroy Mark on Saturday, then the big fights that I want, those fighters won’t be in a rush to face me, not that they are now anyway. I’m always trying to give the same message when I enter the ring. I believe in intellect over athleticism, no matter the situation.

“Mark is actually willing to put it all on the line. He’s going to go out there and give it his best. A lot of other fighters want to hide from the best. But I know Mark wants this badly. It’s a pleasure to share the field of battle with him.

“He said he’s going to show his skills and that’s what I’m looking forward to. I wish other fighters would step up like he did. That’s what the sport of boxing needs.

“I’m competing in the first month of the year, so if we can get through the fight injury-free, we’re going to try to swing back around this summer. I just need a willing opponent. I’m willing to move up in weight, but if I move up, I want to compete against another champion.”

“Gary is a really good fighter. I’ve wanted to fight him for a long time. Now the opportunity is here and I can’t wait for the fight. I’m not expecting any ring rust from Gary Russell.

“I think I’m the fighter who wants to beat him more than anyone else has. I’m here to give him his second loss on Saturday night.

“I can fight and I can adjust. I have speed just like Gary does. On Saturday, we’ll put our skills up against each other.

“Manny Pacquiao is my idol, ever since I was a kid. I started training at eight-years-old because of him to one day become world champion. Now that time is here. I’m so happy that Manny signed me to his promotional company and I’m grateful.

“I learned a lot from the Julio Ceja fight. I showed that I can adjust, that I can brawl and that I can box when I have to. That fight has helped me so much.

“It’s great to have Freddie Roach and Marvin Somodio helping me every day. I thought that I already knew boxing, but when I came to the gym they corrected my mistakes and made me a much more accurate puncher.

“Filipinos are born strong, we are warriors. I’m going to bring that attitude and that mentality into the fight.”

“This is a great opportunity for me to show the world who I am. I’m so excited that my mom is here to watch me fight for the first time in the U.S. I’m excited and I’m ready. Saturday is showtime.

“On Saturday you’re going to see my improvements. All of the questions about me and about what happened in the first fight, they’re going to be answered in this fight.

“It’s either him or me, but one of us is getting knocked out. I need to make this a big victory to redeem myself and my career.

“I’ve always promised my mother since we started boxing that I’m going to buy her a home of her own. I haven’t done that yet, but I promise I’m going to fulfill that promise.

“Everyone knows how I fight and that I’m a fan-friendly fighter. That’s not going to change, but I’m so much better in so many ways and I’m going to display my skills in this fight.”

“This fight is a very good opportunity for me. I’m ready to give everyone a big fight. I have to thank Matias, because he’s giving me this chance to fight him again on a big stage like this.

“Everyone knows it’s been difficult through the pandemic and I’ve been wanting this fight throughout the whole time. I promise I’m going to be ready on Saturday night. I’ve been waiting for a long time for this one.

“I’m just taking it one step at a time. I want to be world champion one day, but those fights don’t matter to me yet. It’s all about this fight on Saturday night.

“I believe in my heart that I’m ready. I just love to fight. Knockout or not, it doesn’t matter. I’m going to show my skills and give it my all to win this fight. This is the kind of fight that boxing needs.”

“I believe in myself and I’m excited to take advantage of this great opportunity for me. I’m ready to give everyone a great fight.

“I’ve seen what I needed to see from Lukas. I’m going to do everything I can to win this fight and I’m confident in the result.

“I would definitely love another fight against Gary Russell Jr. I want the winner of the main event. I’m focused on my fight, but I want another shot at the title.”

“This is the stage where I want to be. I’m ready to go on Saturday night. I don’t want to go back, I want to stay on this stage and keep climbing.

“Styles make fights. This is short notice for me, so I’m just prepared to go in and do what I do best. Anything can happen. Talk is cheap, it’s a different story when you get smacked in the face.

“It’s been my dream since I was young to fight on events like this in the U.S. I have to leave it all in the ring and make sure there is no doubt about what I can do after Saturday night.”