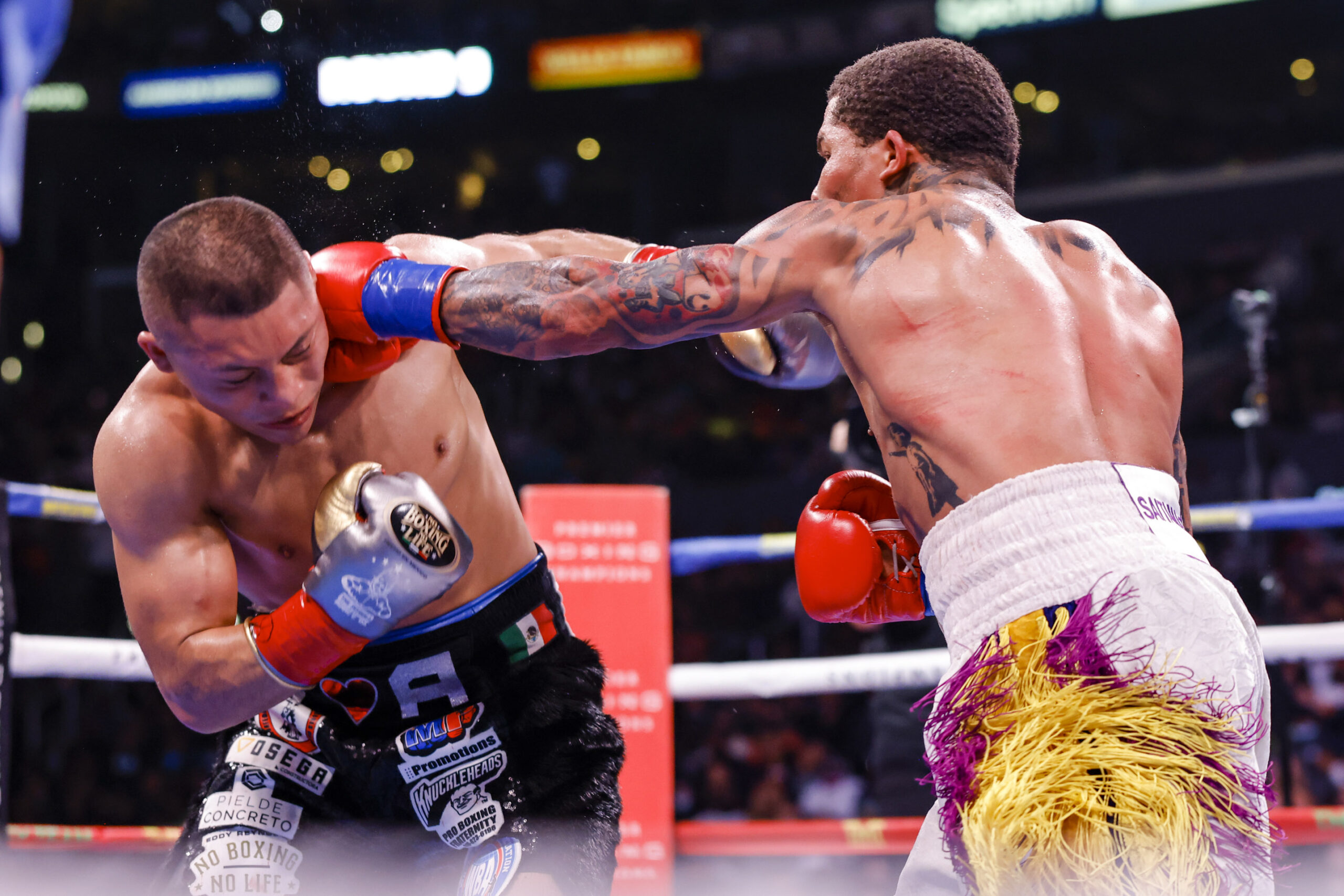 LOS ANGELES (December 5, 2021) –Boxing superstar and five-time world champion Gervonta “Tank” Davis put his boxing skills on display, winning a rousing 12-round round unanimous decision over the relentless Isaac “Pitbull” Cruz to retain his WBA Lightweight World Title in front of a star-studded, sellout crowd of 15,850 at STAPLES Center live on SHOWTIME Pay-Per-View, in an event presented by Premier Boxing Champions.

The atmosphere in the arena was electric, with scores of current and former NBA stars in attendance, including Earvin “Magic” Johnson, Kawhi Leonard, Dwight Howard, Kenny Smith, Kevin Garnett and Paul Pierce among others.

Accompanied by superstar rapper Lil Durk, Davis entered the ring in Laker purple and gold; tassels along his trunks with the late Kobe Bryant’s number “8” and “24” on each side. Cruz celebrated his Mexican heritage with a mariachi band behind him as he strode toward the ring.

There was no feeling-out process in the first. Cruz charged at the defending champion, pinning him against the ropes and wailing away.

“That’s my style. ‘Pitbull’ is always going to be on the attack,” said Cruz. “I think we retained rhythm from the start to the end.”

Davis found his rhythm in the second and third, circling the ring and walking Cruz into shots. In the fourth, Cruz concentrated his attack on the body, pounding Davis’ ribs.

The 27-year-old Baltimore native turned on the power in the fourth, alternating between the right hook and left cross behind his southpaw stance. More punishing blows came from Davis during the fifth.

“He’s a shorter fighter, so I was throwing down on the top of his head,” said Davis. “I hit him with my knuckle and messed it up. I hurt my hand in the sixth round. No matter if the opponent is taller or shorter, I’ve got to get through it. He’s a warrior. Even though he didn’t win, a star was born tonight.”

“It was right around the fifth round I saw that his hand wasn’t working correctly,” Cruz observed.

Davis boxed beautifully in the middle rounds, firing quick shots and pivoting away from the return fire. A right hook in the eighth briefly buzzed Cruz and brought the audience to their feet. But just when it appeared as if the fight was slipping away, Cruz fought fire with fire, landing a flush uppercut seconds before the bell.

The 23-year-old Mexican picked up the pace in the latter rounds, keeping Davis on his toes and pounding away. Davis held his own, fighting back on even terms until the fight’s end.

“Viva Mexico. I have nothing to say, the fans are speaking on who won this fight,” he said.

“L.A., we did it for Kobe,” said Davis. “At the beginning of the fight, he came on strong. I felt as the fight was going, he was breaking down. But I hurt my hand, so I wasn’t able to get him out of there.

“Whatever the best opportunity is for me, I’ll do it. All of them guys are easy work. I’m the top dog.”

In the co-main event, Sebastian “Towering Inferno” Fundora moved closer to a world title shot with a 12-round unanimous decision over the previously-unbeaten Sergio Garcia in a WBC Super Welterweight Title Eliminator.

Fundora established control quickly in the first, snapping Spain’s Garcia’s head back with a booming left. The two traded evenly through the early rounds. Garcia had his moments, including a sharp overhand right in the fifth that drew blood from Fundora’s nose.

The 23-year-old Fundora found his range in the sixth, pumping the jab and using his 6-foot-5 frame and 80-inch reach to keep Garcia at bay.

“I was using my distance a lot more. I wanted to display something different than what I’m used to,” said Fundora. “Height was definitely a difference in this fight.”

Garcia struggled to land during the second half of the bout, save for a couple moments in the 12th when the two combatants stood toe-to-toe.

“Maybe things could have been different if I had been more aggressive from the beginning,” said Garcia. “I shouldn’t have let myself get carried away by what he was doing.”

In a thrilling back and forth, Carlos Adames (21-1, 16 KOs) overcame a stiff challenge from former world title challenger Sergiy Derevyanchenko (13-4, 10 KOs) to win a 10-round majority decision in their WBC Middleweight World Title Eliminator.

Both combatants had their moments, but facing the toughest opponent of his career, the 27-year-old Adames shined. One judge scored the middleweight bout even at 95-95, while the other two scored it for Adames by scores of 96-94 and 97-93.

“This means a lot for me in my career and this is a big accomplishment winning against a fighter of his caliber,” said Adames, who was born in the Dominican Republic and fights out of Washington Heights in New York City.

“I am aggressive and speedy by nature, so I came in ready to do my thing. He started slow, wanting to see what would happen, and simply had the wrong game plan. He got a bit tired as the fight went on, took a lot of hard shots from me and it was evident that I caused him a lot of damage.”

“I expect my opponent to fight the same style. It was nothing special for me, just a quality fight,” said Derevyanchenko.

“He stayed southpaw, that was the difference in the fight. I don’t know what I’ll do next. I need a little bit of rest and then I will go back to the gym because I love boxing and I love the show.”

“This gives me an opportunity to move on,” said Adames. “I dominate at both 154 and 160, so wherever they give me the opportunity to fight for a championship is where I’ll go.”

“I would like to thank the fans, SHOWTIME and the Montiel family for supporting me. Marriaga was a tough opponent, but I managed to dominate,” said Ramirez. “I had a varied fighting style and kept him on his toes the whole time.”

Marriaga (30-5, 26 KOs) was the aggressor throughout, particularly in the first round as he backed Ramirez up with combination punching. The latter found his range midway through the frame, utilizing an accurate jab. In the third, a right hook followed by an overhand left floored an off-balance Marriaga for a flash knockdown.

“We started out strong, but then things got progressively harder. Having said that, we are pleased with the work we put in today,” said Marriaga. “We should have been more savvy, but we tried our hardest in the face of a great opportunity that unfortunately we could not take advantage of.”

Ramirez dominated after scoring the knockdown, punishing Marriaga from then on with an assortment of shots to the head and body. Final punch stats had Ramirez landing 280 of 762 (36.7%) total punches to Marriaga’s 159 out of 689 (21.3%).

“Now I’m going to relax with my family and enjoy the holidays,” said Ramirez. “Then hopefully 2022 will come with a title shot for me.”

Tonight’s blockbuster pay-per-view event will re-air on SHOWTIME this Saturday, December 11 at 10 p.m. ET/PT. The delayed telecast of Davis vs. Cruz will open the telecast featuring WBC Bantamweight World Champion and future Hall of Famer Nonito Donaire as he will defend his title against undefeated top contender and fellow Filipino countryman Reymart Gaballo headlining in a Premier Boxing Champions event from Dignity Health Tennis Stadium in Carson.