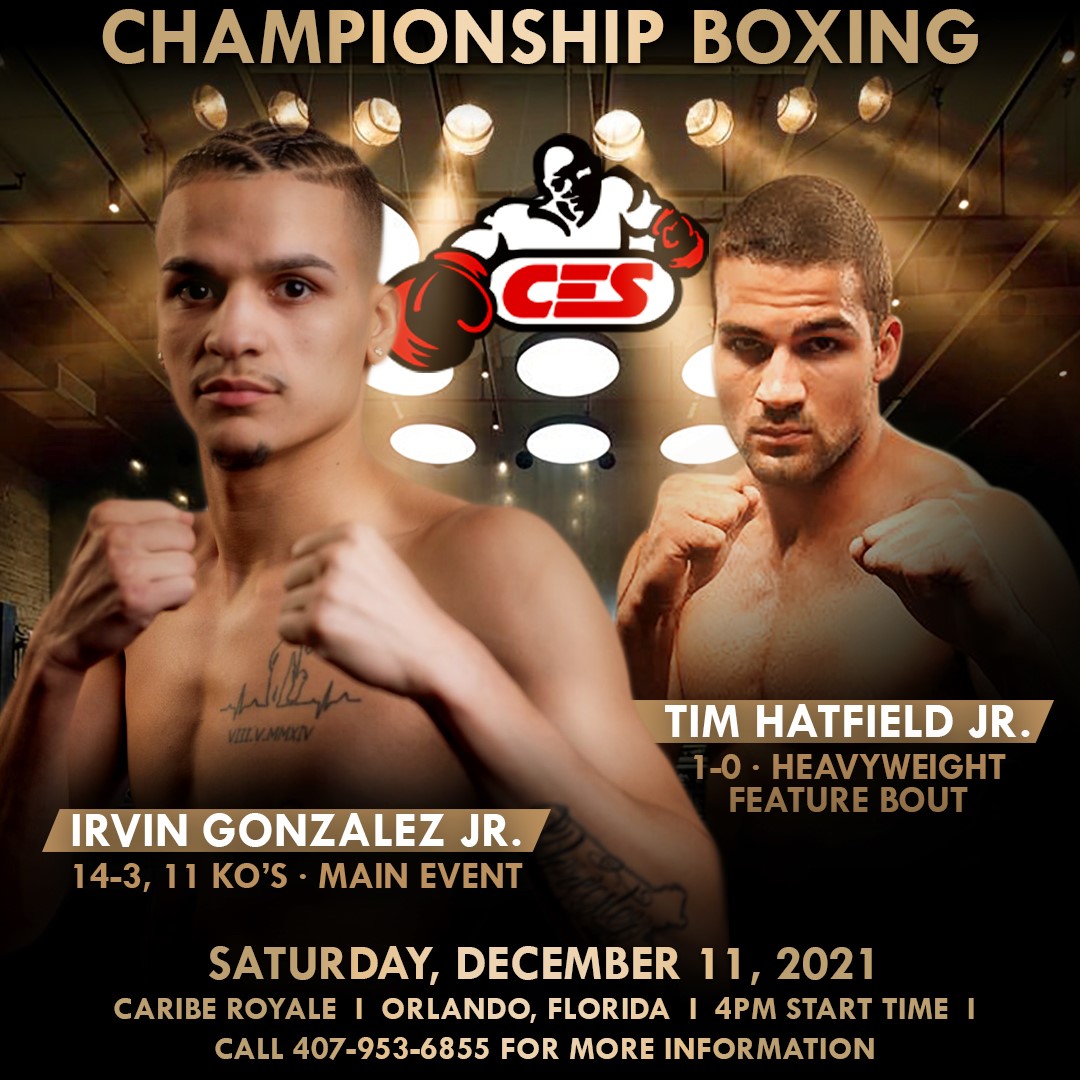 Orlando, FL (December 10) – CES Boxing and two of its top stars are heading south for the holidays to close out 2021 with a bang.

The 25-year-old Gonzalez, a Worcester, MA, native, headlines in the eight-round main event against hard-hitting Colombian Yeison Vargas (17-8, 12 KOs), who boasts 17 wins as a pro with 12 coming by knockout. Hatfield, the former Brown University football player who now lives and trains in Providence, RI, steps back into the ring for the second time in less than three weeks to face North Carolina’s Quamayne Johnson (0-1) in a four-round bout.

Gonzalez returns to the ring Saturday for the first time since November of 2020 when he lost a narrow split decision in a wildly-entertaining fight against Edward Vazquez on the undercard of the Mike Tyson-Roy Jones Jr. pay per view showcase in California. He was scheduled to fight again in June against Adan Ochoa in Rhode Island, but a slight injury derailed his comeback.

Fully-healed and well-rested, the former amateur standout is ready to send another message to the world’s top featherweights as the calendar prepares to flip to 2022. Vargas is no walk in the park; the 31-year-old right-hander has shown the ability to end fights quickly with 10 of his 12 knockouts coming within the first two rounds. In one of his better performances of late, he went eight rounds against unbeaten Cuban super bantamweight prospect Jorge De Jesus Romera in March.

With a win Saturday, Gonzalez would shake off the rust from a 13-month layoff and inch one step closer to returning to his pre-injury form; Gonzalez signed a long-term promotional contract with CES in 2019 and within a year wrapped the WBC title around his waist following a thrilling knockout win over Yeuri Andujar in his hometown of Worcester in February of 2020.

Hatfield is just getting started. After a brief, but solid, amateur career, the former defensive tackle and future medical student made his pro debut November 27 in Springfield, MA, flattening Rodrigo DaRocha in 63 seconds.

A naturally-gifted athlete, Hatfield is an imposing figure at 6-foot-7 and benefits from the tutelage of trainer Roland Estrada and his son, former U.S. Olympian Jason Estrada. Since graduating Brown, Hatfield has put medical school on hold and is currently working as a sales representative for Paychex, a human-capital services company that handles payroll, employee benefits, and other human resources functions as well as business insurance for small and medium-sized businesses.