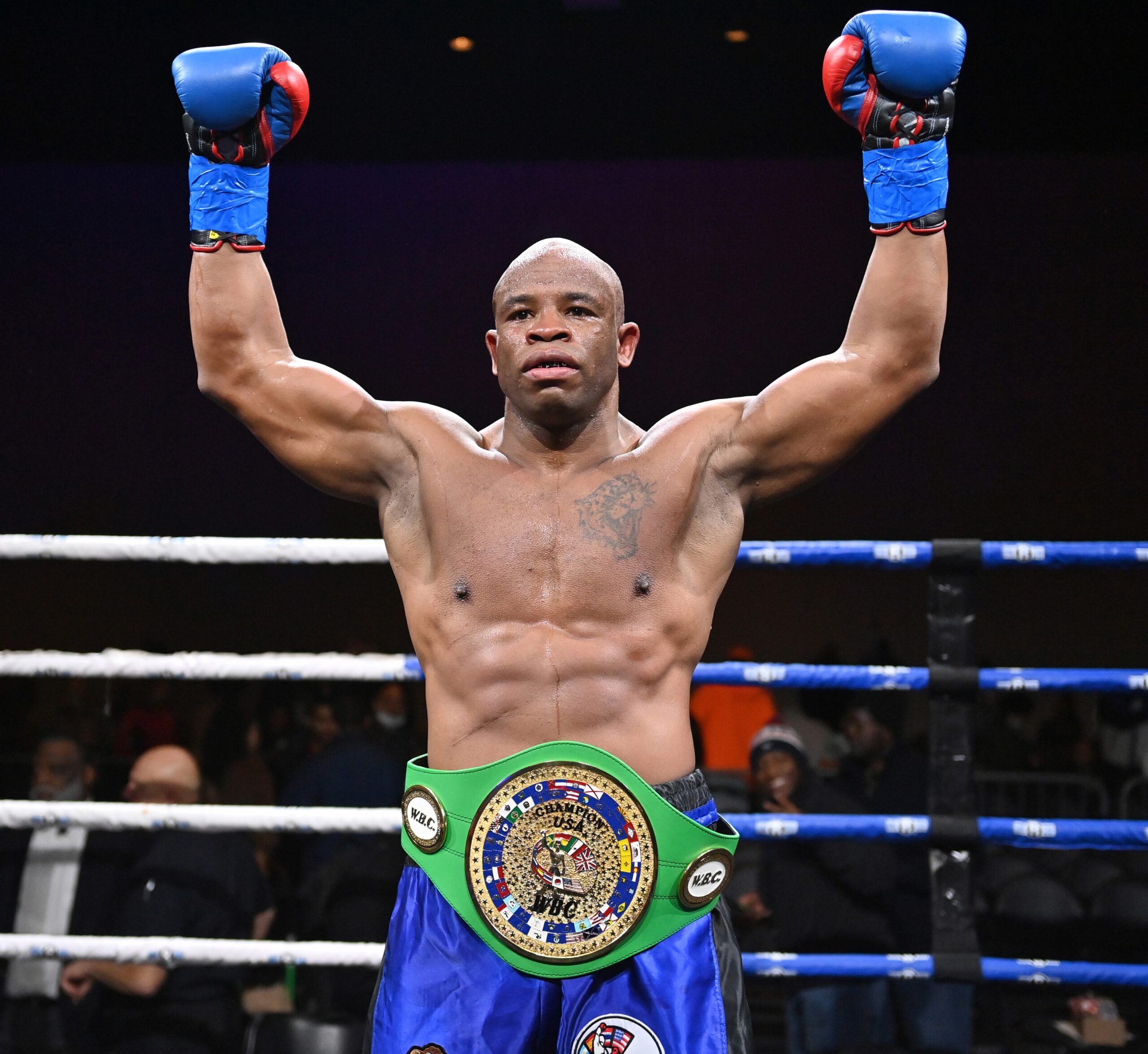 The 40-year-old Los Angeles native won the vacant WBC USNBC super middleweight title at the MassMutual Center with a ninth-round knockout win over Worcester, MA, native Kendrick Ball Jr. (17-2-2), headlining an eight-fight card promoted by CES Boxing and snapping his own three-fight losing streak, which dated back to 2019.

Despite an impressive resume that included wins over Marco Delgado, Eric Moon, and Denis Douglin and a bout against Sergiy Derevyanchenko, the 5-foot-8 Guy entered (on paper) as the underdog against the 6-foot-2 Ball, who had recently captured the WBC USNBC Silver title and defended it for the first time in August against Tyi Edmonds.

Once the bell rang, Ball was no match for Guy’s aggressive, come-forward approach; Guy had little trouble working his way to the inside and eluding Ball’s jab, dropping Ball with a hard, overhand right in the opening round. Guy continued the onslaught in rounds three and four, though Ball did a better job defensively by not absorbing as much damage.

As Guy continued to throw every punch with bad intentions while working at a frenetic pace, the only question was whether or not he’d run out of gas in the later rounds. Ball boxed effectively in rounds five and six when he was able to use his height to his advantage, but Guy caught a second wind down the stretch and hurt Ball again in the ninth before catching him with a flurry against the ropes, landing several hard shots that forced the referee to step in at the 1:26 mark.

For Guy, it was his first win since beating Douglin in November of 2019, almost a full three years, while Ball hadn’t lost since 2018, a streak of eight consecutive wins entering Saturday.

In the co-main event, New London featherweight Shelly Vincent (27-2) made a triumphant return to the ring, outworking Chicago’s Shelly Barnett (5-6-2) en route to a 80-72 unanimous decision win on all three scorecards. Vincent, who hadn’t fought since 2019, looked sharp as ever at the age of 42, consistently staying a step ahead against the smaller, quicker Barnett, who jumped from 120 pounds to battle Vincent. Nicknamed “Shelito’s Way,” Vincent has now won four in a row and is now 15-0 lifetime fighting for CES.

Fresh off a comeback win in September, New Britain, CT, featherweight Nathan Martinez (7-2) lost a narrow split decision to Puerto Rico’s Jayron Santiago Lopez (8-8), 58-56, 56-58, 58-56, after the fight was stopped 44 seconds into the sixth and final round due to an accidental headbutt that opened a cut over Martinez’s right eye.

Martinez got rocked at the end of round one, but fought back to score a knockdown in the second round courtesy of two overhand rights that sent Lopez crashing to the canvas. Lopez continued to press the action and the two fought within arm’s length of one another for the majority of the fight, leading to the headbutt that opened the cut over Martinez’s eye. After a lengthy examination on the ring apron, ringside physical Dr. Peter Warinner stopped the fight, at which point the decision rested on the judge’s scorecards.

Springfield welterweight Jalen Renaud (7-0, 3 KOs), who bumped up to 154 for this fight, sent the crowd into a frenzy with arguably the knockout of the night, cracking Jurmain McDonald (5-5) of Jefferson City, MO, with an overhand right at 1:37 of the fourth round. The fight, scheduled for six rounds, was back and forth until Renaud caught McDonald with a thunderous shot, immediately prompting the referee to stop the bout as McDonald struggled to get to his foot. Renaud remains unbeaten at 7-0.

In one of the most exciting fights on the preliminary card, Springfield super featherweight Isaiah Cruz (2-0, 1 KO) stopped newcomer Darren Mima (0-1) with only two seconds remaining in the fourth and final round. Mima, an MMA veteran of 19 professional bouts making his boxing debut, absorbed some early damage in the opening round, but continued to fight back until Cruz knocked him down in the closing seconds of the final round. Mima tried to survive the bell, but Cruz rocked him two more times, prompting the referee to stop the bout at the 2:58 mark.

Making her second appearance of the year with CES and second since September, Connecticut welterweight Stevie Jane Coleman (2-1) ran her winning streak to two in a row with a unanimous decision win over LeAnn O’Malley (1-1) of Las Vegas, earning a 40-36 score on all three cards. Springfield featherweight Joshua Orta (8-0, 4 KOs) made quick work of Vermont’s Kody Murray (0-1), a late replacement due, via first-round stoppage at 2:24.

Providence’s Timothy Hatfield (1-0, 1 KO), a former defensive tackle for the Brown University football team, made a huge splash in his pro debut, stopping Woburn, MA, heavyweight Rodrigo DaRocha (0-2) at 1:03 of the opening round.