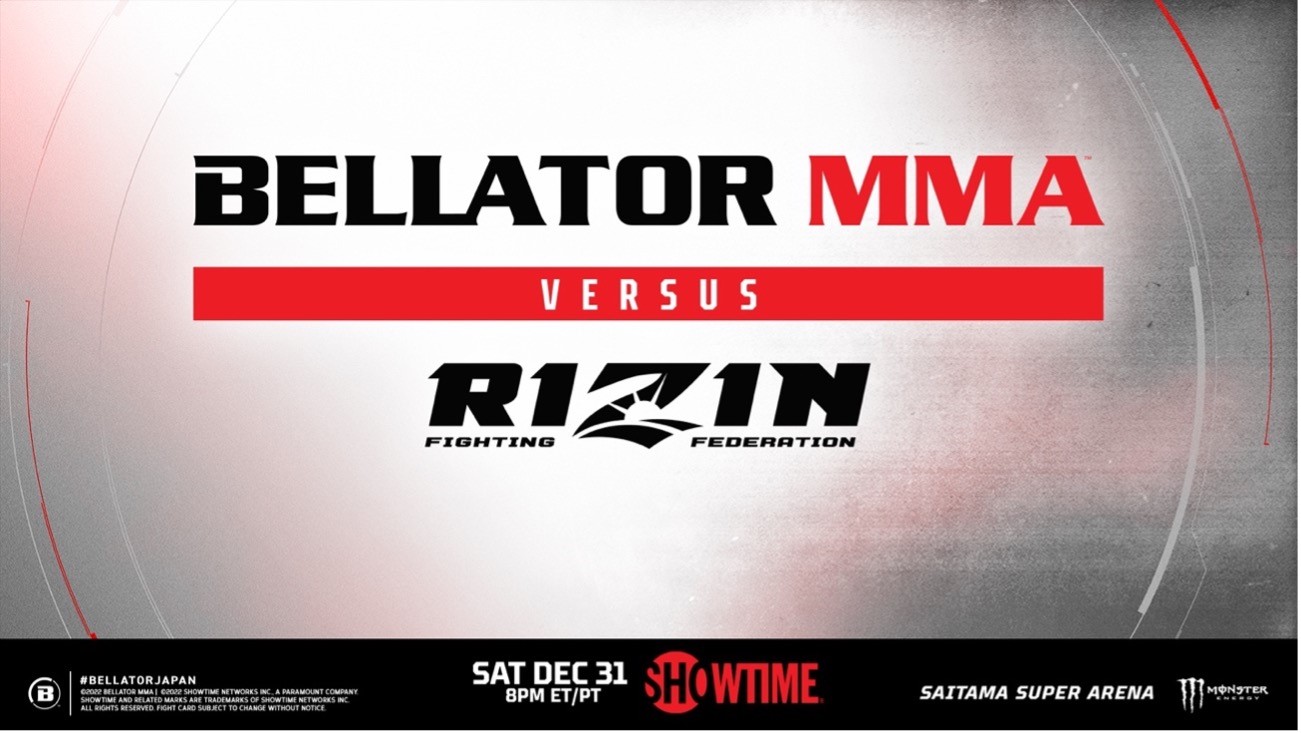 BELLATOR MMA athletes will step outside of the cage and compete inside the four-sided ring against their RIZIN counterparts in a five-fight main card. BELLATOR MMA and RIZIN have led the way for the entire MMA landscape on collaborative co-promotion dating back to 2015, however, this will be the first time two promotions have had their top fighters challenge one another over the course of an entire event. Additional information, including the rules set will be revealed soon.

Representing BELLATOR in Tokyo at this star-studded spectacle will be current featherweight world champion and No. 1-ranked pound-for-pound athlete Patricio Pitbull (34-5), his prior foe and No. 3-ranked pound-for-pound talent AJ “Mercenary” McKee (19-1), as well as a pair of former BELLATOR Bantamweight World Champions in Juan “The Spaniard” Archuleta (26-4) and Kyoji Horiguchi (30-5). A fifth main card BELLATOR fighter, along with an entire preliminary card offering will be announced in the near future.

PRESS CONFERENCE INFO – Several matchups will be formally announced at a special kickoff press conference held this Wednesday, Oct. 26 at the Roppongi Hills Arena in Tokyo. The press conference is open to the public and will also stream live on the BELLATOR MMA YouTube Channel beginning at 6 p.m. JST/5 a.m. ET.

BELLATOR MMA vs. RIZIN takes place Saturday, December 31 and can be seen in the United States on SHOWTIME beginning at 8 p.m. ET/PT.

Believed by many to be BELLATOR’s greatest all-time athlete, Patricio Pitbull has shown no signs of slowing down nearly two decades into his professional MMA career. The reigning BELLATOR featherweight champion defended his title in dominant fashion earlier this month against No. 1-ranked contender Adam Borics (18-2) in the main event of BELLATOR 286, notching his ninth victory in his last ten outings. Pitbull was BELLATOR’s second-ever athlete to simultaneously hold two weight classes’ titles, and his championship pedigree is unrivaled; the Brazilian holds the promotion’s records for fights, wins, title fights, title victories, and total championship reigns. A threat in any situation, Pitbull has won 23 of his 34 professional victories by stoppage, totaling 11 knockouts and 12 submissions in a showcase of his dangerous finishing abilities and impressive well-roundedness. At 35, Pitbull’s remarkable consistency has rendered him a living legend in the sport. He remains BELLATOR’s top pound-for-pound talent in the promotion’s official rankings, and he has his sights set on dropping down to bantamweight in pursuit of a historic third championship in the near future.

Arguably the best homegrown talent in the history of  BELLATOR MMA, Long Beach’s AJ “Mercenary” McKee proved his championship caliber and world-class status with a devastating, title-clinching run in the BELLATOR Featherweight World Grand Prix. The 27-year-old defeated Patricio Pitbull at BELLATOR 273 to become the promotion’s featherweight champion, fulfilling a lifelong dream and ascending to the top of BELLATOR’s pound-for-pound rankings. McKee’s lightning-quick submission ability and dynamic striking arsenal have manifested in 13 combined stoppage victories, enough to tie for first-most in BELLATOR history with Pitbull and Michael Chandler; McKee’s seven submissions, including the consensus 2020 Submission of the Year, lead the BELLATOR featherweight division. His record-setting 18-0 start to his career catapulted him to superstardom in the sport, but McKee isn’t done adding to his burgeoning legacy by any stretch of the imagination: earlier this month, “Mercenary” successfully debuted in the lightweight division, the first step toward capturing a second world title under the BELLATOR banner. Today, McKee is ranked as BELLATOR No. 3 pound-for-pound talent.

Juan “The Spaniard” Archuleta holds the distinction of being the only professional mixed martial artist to have held notable championships in four weight classes, a feat that prompted BELLATOR MMA to sign the 35-year-old to the roster. Archuleta’s success continued under the BELLATOR banner; “The Spaniard” captured the promotion’s bantamweight title in 2020 with a unanimous decision victory over Patchy Mix (16-1) and was among the elite eight bantamweights who comprised the BELLATOR Bantamweight World Grand Prix. The former NJCAA national wrestling champion utilizes his crisp striking and technical wrestling to outclass opponents both on the feet and the canvas. Earlier this month, Archuleta outpointed the relentless Enrique Barzola (18-6-2) to secure his position as BELLATOR’s No. 3-ranked bantamweight contender in a division fraught with notable, world-class competition.

Japan’s Kyoji Horiguchi is one of the country’s finest fighters of all time, which is no small feat when one considers the legendary athletes to have emerged from the “Land of the Rising Sun.” The 32-year-old has held the Shooto, RIZIN Fighting Federation, and BELLATOR Bantamweight Championship over the course of his 12-year professional career, facing a who’s-who of elite opposition along the way. An artful striker who has notched half of his MMA wins by way of knockout, Horiguchi returned to the win column last month with a second-round submission Yuto Hokamura (14-12-2) in a testament to his continued development as a mixed martial artist. The American Top Team product was an entrant in the BELLATOR Bantamweight World Grand Prix and is ranked No. 5 in the official BELLATOR rankings. He will seek to earn his way to a title shot in the hopes of recapturing the BELLATOR belt, which he won in 2019 by defeating Darrion Caldwell (14-6) for a second time in consecutive outings.