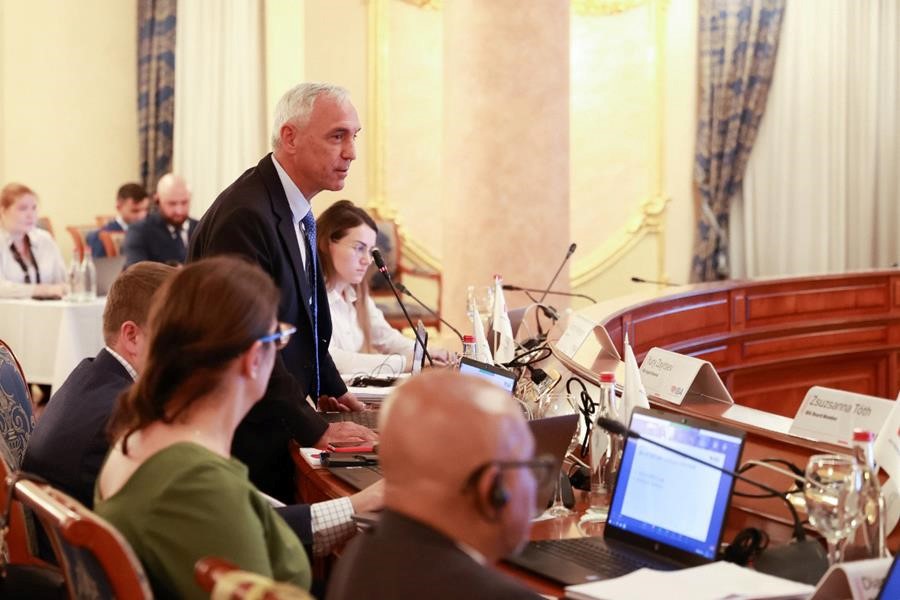 (September 23, 2022) – George A. Yerolimpos became a new IBA Secretary General following the selection process and decision of the IBA Board of Directors (BoD) at its meeting in Yerevan today. The appointment is effective immediately.

In total, 50 candidates applied for the position. Four candidates were shortlisted and interviewed, and two of them were chosen by the Selection Committee to present them for the Board of Directors’ consideration. The BoD voted for Yerolimpos with a majority of 87%.

A qualified economist by education, he was formerly an Executive Director of the SportAccord, and Secretary General of another International Federation for 16 years. He also was a member of the Hellenic Olympic Committee until 2021.

‘I would like to thank you for your trust. It is an honor for me to be appointed as Secretary General for the International Boxing Association. I will dedicate all my time to the rebranding of IBA at all levels, especially in integrity and transparency. IBA is my new home,’ said a newly elected IBA Secretary General Yerolimpos.

A number of important issues were also discussed at the meeting.

The BoD appointed the IBA Strategy Committee, whose Chairperson is IBA President Umar Kremlev. The Committee will develop, together with the Secretary General, IBA’s long-term strategic plan covering 4 years. The voting process was organized in groups, according to the skills map. The following members were selected:

Additional candidates from Oceania are supposed to be voted for later, as they are undergoing the vetting process.

Chairs and Vice-Chairs of the newly established IBA Technical and Management Committees were selected today. In total, IBA Head Office received 267 CVs for eight committees, including 25% of applications from women. The newly elected people will undergo integrity checks.

The Rules of the Boxing Independent Integrity Unit (BIIU) were unanimously approved. According to these rules, BIIU will operate independently as per the recommendations of the Governance Reform Group. Within the BIIU Compliance Unit, two new bodies are established, including the Tribunal which will decide on ethics and disciplinary cases, and the Dispute Resolution Chamber which will settle disputes between boxing stakeholders.

The IBA competitions calendar for 2022-2024, including hosts of the World Boxing Tour events, was presented to the BoD.

The Ukrainian Boxing Federation was temporarily suspended, due to the interference of the government in the work of the national federation. The suspension will be revoked if the conditions are met – the autonomy of the federation and recognition by Ukrainian authorities of the election that took place on 17 December 2021.

‘We are deeply concerned about the Ukrainian boxing state since we have learned about government interference. We will do our utmost to support the athletes in this situation, the suspension of the National Federation shouldn’t affect any single boxer of Ukraine,’ Yerolimpos said.

IBA Extraordinary Congress is to take place in Yerevan on September 25th. National Federations will vote for the necessity of the Presidential elections. Should they vote in favor, the elections will take place immediately. If Congress votes against it, incumbent President Umar Kremlev will hold his position for 4-years term.